Sixteen podiums for OTK chassis during weekend in Homestead 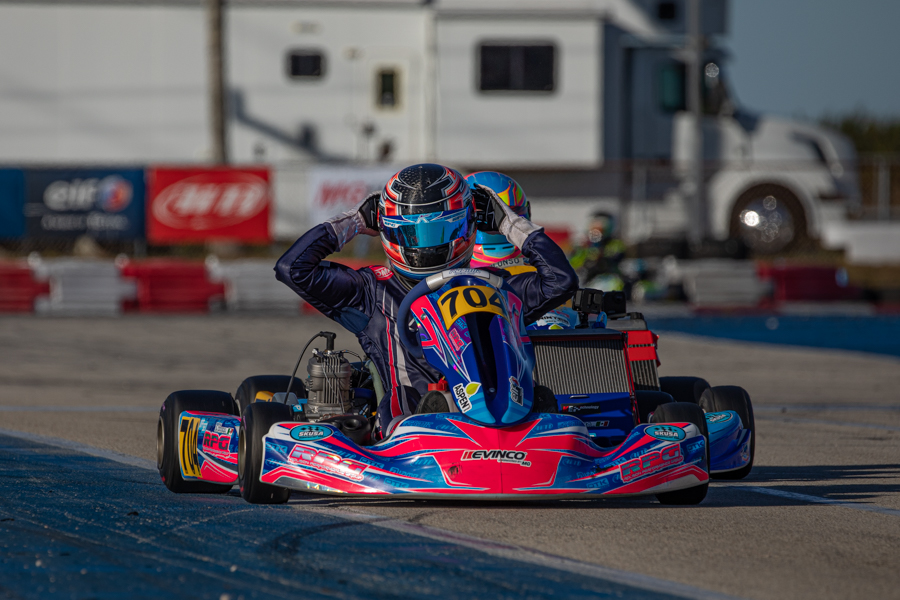 Ernesto Rivera carried the SuperNationals 25 momentum into his first victory of 2023 in X30 Junior aboard his RPG Kosmic (Photo: eKartingNews.com)

OTK USA drivers descended on the AMR Homestead-Miami Motorplex for the first of two weekends for the annual Superkarts! USA Winter Series, a four-round championship to kick of the 2023 karting calendar, on the grounds of Homestead Miami Speedway. The 12-corner circuit has ample passing opportunity, with a good mix of slow-speed technical, and high-speed commitment corners. The rain fortunately held off during the weekend, making for some incredible wheel-to-wheel action throughout every Prefinal and Final.

In X30 Senior, Kosmic kart driver Donovan Bonilla (Rolison Performance Group) put OTK on the top step of the podium for Sunday’s races, scoring a breakout win in the ultra-competitive category.  After starting third, Bonilla fell back to ninth of the start, but was able to make his way back up to the sharp end of the field, taking the lead with five laps to go and not relinquishing that lead for the remainder of the race. In the prior day’s races, Redspeed driver Austin Garrison (Speed Concepts Racing) and Kosmic pilot Ryan Norberg (Rolison Performance Group) headed the charge for OTK. Both drivers held firm in the top five throughout the Final, which eventually saw Norberg come across the line to take second on track, but after a penalty was dropped back to fourth. This moved Garrison up to second after he finished third on the road, putting him in championship contention for the final weekend of the series in February. 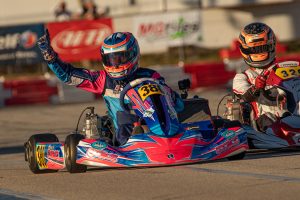 Peyton Phillips (Ryan Perry Motorsport / Tony Kart) was the only driver on OTK equipment to stand on the podium in KA100 Senior on the weekend, scoring a second-place finish on Saturday. Phillips was one of the favorites for Saturday’s races, as the Tony Kart driver was second in qualifying and came first in the Prefinal. Come the Final, Phillips was in the battle for the lead, swapping positions with two other drivers throughout the entirety of the race, and came across the line just a few tenths back from the leader in second.

X30 Junior saw seven top-five finishes for OTK products on the weekend, with an additional four podium finishes and one win from Kosmic driver Ernesto Rivera (Rolison Performance Group) on Saturday. Rivera was dominant on Saturday, going fastest in qualifying and taking the win in the Prefinal. He dropped back to second off the start, but by lap nine, retook the lead and never looked back, taking the opening round of X30 Junior. Rivera’s teammate Teddy Musella (Rolison Performance Group / Kosmic) worked his way up the field all day to put himself in third, and Oliver Wheldon (JC Karting) took a well-deserved fourth-place finish on his Lando Norris Kart. Come Sunday, Rivera hit trouble in the Final after showing pace all day and fell back allowing his Rolison Performance Group teammate Jackson Wolny to lead the OTK charge. Wolny held with the leader in the dying embers of the final, coming home second, with Rivera behind in third and Max Taylor (Rolison Performance Group / Kosmic) crossing the line in fourth. The final kart in the top five would be Tony Kart pilot Leonardo Escorpioni (Zanella Racing), after making up six spots from 11th. 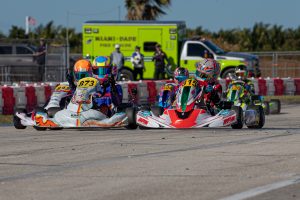 Jensen Burnett (Ryan Perry Motorsport / Tony Kart) lead the charge both days in KA100 Junior for OTK drivers, getting on the podium both days, and taking a sensational win on Saturday in the final corner. Burnett started eighth for the Final on Saturday but worked his way up to the front group methodically throughout the race. On the final lap, he was sat third behind the leaders, where in the last corner, he switch-backed both and took the win by just two-hundredths of a second. Ivanna Richards (HRI / Tony Kart) had a great view of the lead battle in fourth, and Ernesto Rivera (Rolison Performance Group) rounded out the top-five on his Kosmic. Come Sunday, Burnett would, unfortunately, be unable to match his result from Saturday, but finished the final in the next best spot, in second. Hudson Schwartz (Rolison Performance Group) on a Kosmic finished on the podium in third, and teammate to Schwartz, Jackson Wolny (Rolison Performance Group / Kosmic) ended the weekend in fifth. 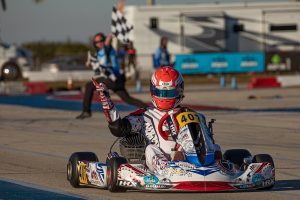 The Superkarts! USA Winter Series will conclude on the February 10-12 weekend, returning again to the AMR Homestead-Miami Motorplex in Homestead, Florida, competing in the clockwise direction for Round Three and Four.