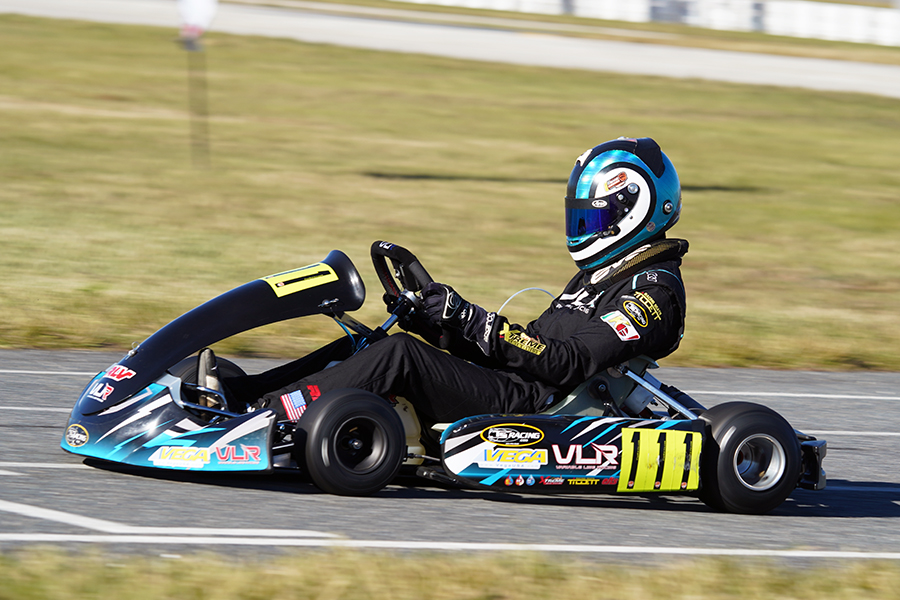 The annual trip to Florida to close out the season is always the focus in December as the World Karting Association hosts the Daytona KartWeek event. Three forms of karting gather at the Daytona International Speedway in Daytona Beach, Florida – including dirt oval, road racing, and sprint racing. The WKA Manufacturers Cup Series program on the sprint track inside turns 3 and 4 held a practice day followed by two separate rounds of racing for the 12 categories offered.

The driver to lead in the win column with three victories was Florida’s Colin Warren. The seven-time Cup Karts North America Grand Nationals winner has shown to be one of the top Briggs 206 racer in the country over the last five years. He competed in both the 206 CIK 360 class and the 206 CIK 380 division.

Warren set the tone from the beginning with the 206 CIK 360 class qualifying session. He laid down a 45.927-lap to clear the 37-driver field by over two-tenths of a second. The 10-lap Prefinal was all Warren, leading each lap and pulling away to a 2.8 advantage. Due to a red flag in the early order of the Finals, the main event for this class was shortened to eight laps. It was Warren at the front for all eight circuits, including a fast lap of the race on Lap two. He drove away to a 2.3-second advantage by the checkered flag for his first win of the event.

The 206 CIK 380 class, featuring 23 drivers, was later in the class order, and Warren began Day 1 of the event in this category with a fast time in qualifying, posting a 46.677. It was only a slim margin he took the quick time with Cameryn Reed and Adam Maxwell only 25 thousandths off his time. Warren kept his VLR / TS Racing machine at the front for all 10 laps of the Prefinal to win by only four-tenths over former WKA winner James Overbeck. The Final, due to the red flag earlier in the day and the daylight running out, only saw five official laps completed. Warren found himself under attack early, and was able to get back into second but the race was ended. 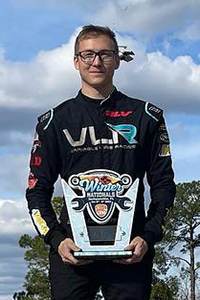 Day 2 at Daytona began similarly to the previous with Warren at the front of the field in 206 CIK 360. Warren edged out Gage Sessler and Overbeck by 66 thousandths with a time of 46.008. The Prefinal was a fight early on with Colin slipping back to third at one point. He eventually returned to the front and drove away to a 1.3-second advantage at the checkered flag. Warren was able to get away from the field in the Final, leading all 10 laps and establishing a 3.3 margin of victory to end a perfect run in the category over the two days.

The 206 CIK 380 class did not see Warren at the top of the order when qualifying was completed for Day 2 action. Warren found himself back in seventh, three-tenths off the quick time set by Jake Sessler. The 10-lap Prefinal saw Warren climb up the order with fast laps of the race, grabbing the lead on the final circuit to take the race win over Sessler. The 10-lap Final was all Warren, posting the fast lap of the race on lap five, and cruising to a 4.1-second advantage at the checkered flag for his third victory of the event.

Warren followed it up with the first event in 2023, winning the Senior Light class at the Cup Karts North America Winter Nationals in Jacksonville over the January 6-8 weekend. He is set to keep his primary focus on the 2023 season in Briggs & Stratton racing. Colin will compete in the full Cup Karts North America South Division along with their major national events (Spring Nationals and Grand Nationals 7). He will also compete in the WKA Gold Cup program while looking to continue making starts in 2-cycle racing at the United States Pro Kart Series and Sunshine State Karting Challenge. When not behind the wheel, Warren is working with Chad Dokken Racing as driver coach and data analyst.

Chassis: VLR (4-cycle) / Kart Republic (2-cycle)
Engine/Engine Builder: TS Racing (4-cycle) / Allison Racing Engines (2-cycle)
Sponsors: TS Racing, RLV Tuned Exhaust (4-cycle) Chad Dokken Racing (2-cycle)
Series You Compete In: Cup Karts North America, WKA, USPKS, SSKC
Years Karting: 21
How did you get started in karting? I Raced BMX when I was 4 years-old and my dad made a deal that if I won the championship, I could race karts. I won it that year and moved into Kid Karts.
What has been the high point in your racing career? Winning 7 of 14 Cup Karts North America Grand Nationals main events. Traveling to Ireland to race Tillotson World Finals. Traveling to Italy for the Easykart World Finals twice.
What are your goals in racing? I would like to pursue a career in cars eventually. I really enjoy open wheel cars and sportscars.
In a few words, how would you describe your driving style? Calm and Calculated
Funniest moment at the race track? I can’t think of any moments that stand out.

What do you do when not at the track? Hang out with friends and enjoy my alone time
What are your goals outside of karting? Hopefully be able to transition to cars and make a career driving and doing data/driver coaching.
What type of street car do you drive? 2013 Mini Cooper GP
What type of street car would you like to drive? 2011 Lotus Exige S RGB Edition
What are your pet peeves or things that irritate you? Lack of Respect/Kindness.
What do you think could be done to improve the sport of karting? Karting being less expensive and integrating it more with race car teams and series.
What are your favorite aspects about the sport of karting? The competitiveness and how it’s almost impossible to master. There is always more to learn.