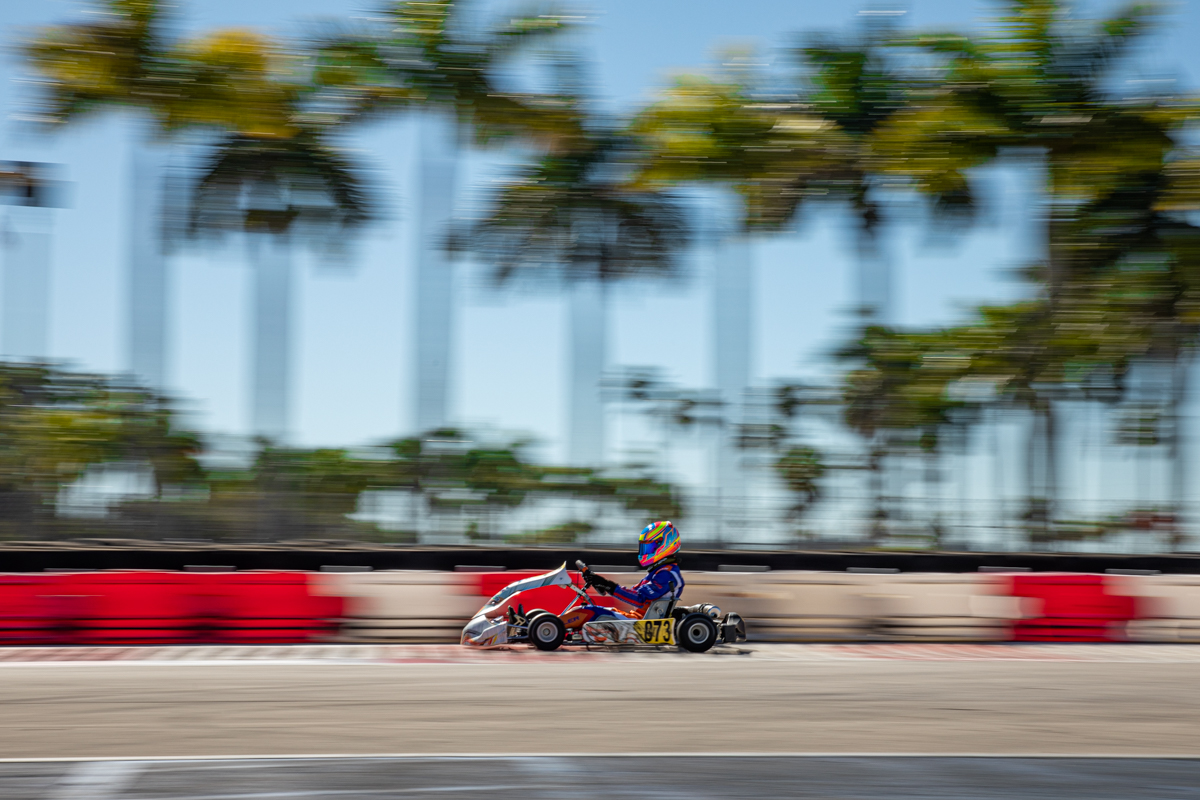 The second round of the 2023 Superkarts! USA Winter Series was run under sunny skies and warm temperatures at the AMR Homestead-Miami Motorplex Presented by MG Tires on Sunday, and the biggest winner on the day was Rolison Performance Group X30 driver Donovan Bonilla. The 16-year-old sophomore Senior driver was in the trenches of an epic battle in the headline single-speed pro class that featured all the biggest players in the sport, and he worked his way into the lead, holding off Parolin USA’s Alessandro de Tullio for the triumph. In the Pro Shifter, the much-anticipated head-to-head battle between AJ Myers (Magik Kart USA/Magik Kart) and super-fast Miami local Alan Isambard (ANSA Motorsports/Formula K) did not materialize after Islambard suffered a mechanical in the Prefinal. In Isambard’s absence, Myer grabbed the holeshot and walked away to the win. 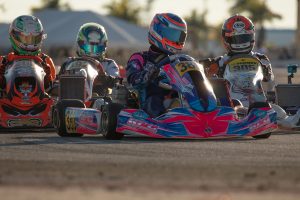 Donovan Bonilla fought off some of the world’s best to claim victory in X30 Senior on Sunday (Photo: EKN – Nate Dean)

The Speed Concepts Racing X30 Senior class was stacked with talent on the weekend, part of a total entry list that topped 250. PSL Karting’s Diego Ramos (Birel ART) notched his first pole position for the team, edging Saturday winner Joe Turney (Kart Republic) by just 0.074 seconds. Bonilla timed in eighth, but the best was yet to come. Turney took the lead on lap four of the Prefinal to secure the pole for the main event over de Tullio, while Bonilla advanced to third to position himself on the inside of row two for the 22-lap final. The Sunday main event was a barn-burner including many of the quick drivers from the weekend with Turney leading five-time SKUSA Pro Tour champion Ryan Norberg (RPG / Kosmic) early on. Top qualifier Ramos put himself into the lead by the halfway point, and that is when the dicing for position began. Both de Tullio and 2022 FIA World Karting Champion Matheus Morgatto (PSL / Birel ART) put themselves up into the lead group. Each took a turn at the point before Ramos returned to the point with Bonilla on his bumper. With nine laps remaining, Bonilla made his first attempt at the lead into turn one, pushing wide on exit and allowing Ramos back through. It was turn four hairpin that Bonilla attacked for a second time, securing the position but not until the two made slight contact entering turn five hairpin. Ramos’ engine died and he was left trying to refire as the leaders zipped by. This gave Bonilla a gap in the lead until he was run down by de Tullio in the closing laps. Through the final two circuits, Bonilla held off the challenge by de Tullio to grab his first career SKUSA victory by only 63 thousandths at the line. Fellow Mexico driver Noel Leon (Alessandros / CRG) won the battle for third ahead of Canadian Thomas Nepveu (Kart Republic) with Turney ahead of the fight for fifth at the checkered flag. 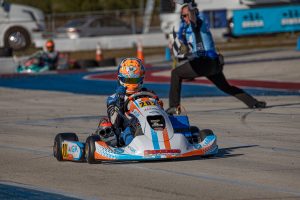 After a less than ideal Saturday for AJ Myers (Magik Kart USA) in PSL Karting Pro Shifter, the veteran star came back with a vengeance on Sunday, taking a clean sweep of all the competitive sessions, helping him make up points on championship rival Alan Isambard (ANSA / Formula K). Myers had a commanding lead at the end of the Final, taking the win by 3.2 seconds over Isambard in second, who had to start from last after a mechanical problem in the Prefinal. When the dust settled from the weekend, Isambard leads the standings in Pro Shifter by 38 points over Myers, having scored the fast lap on Sunday’s main to add more points. Loris Spinelli (Magik Kart USA) took third on the road, making it a double podium for Magik. Giorgio Carrara (International Motorsport / Tony Kart) was just off the podium in fourth, followed by Giano Taurino (Magik Kart USA) in fifth. 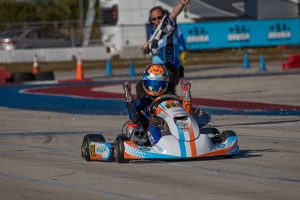 Greyhound Racing Seats Master Shifter saw three different drivers top the time sheets throughout the day, with Patrick Otto Madsen (ANSA / Formula K) going fastest in qualifying. Otto Madsen would later get disqualified in the Prefinal for a technical infringement involving the rear width of his kart, making Scott Presti (Presti / RS Kart) the race winner. Scott ‘Skitchy’ Barnes suffered a DNF in the Prefinal but came back to take the victory in the Final, making it a clean sweep for Magik Kart USA in the shifter categories. Otto Madsen and Frank Runco (Magik Kart USA) joined the Bermuda native on the podium, with Dan Breitenstein (RYSA / Birel ART) finishing fourth, as Presti failed to see the flag having been embroiled in a battle with Otto Madsen for second. 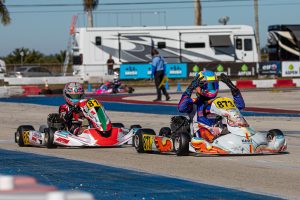 Steven Miller was able to beat out Saturday winner Jensen Burnett for the victory in KA100 Junior on Sunday (Photo: EKN – Nate Dean)

After losing out to Jensen Burnett (RPM / Tony Kart) by just two hundredths of a second in Saturday’s Final, Kart Republic pilot Steven Miller (CDR) had some unfinished business to settle come Sunday in MottazSport KA100 Junior. Miller qualified in third behind Rolison Performance Group drivers Ernesto Rivera (Kosmic) and Max Taylor (Kosmic), who both hit trouble during the day’s races. Miller took the win in the Prefinal over Burnett after Rivera failed to make the green due to technical issues, and the SuperNationals 25 winner kept the momentum into the Final. Miller was the kart to beat in the main event, taking the win. Burnett would end the weekend with two podium finishes in the category, placing runner-up in Round Two. Hudson Schwartz (RPG / Kosmic) finished his weekend on the final step of the podium in third, his first in national level competition, and he was trailed by Enzo Vidmontiene (MottazSport / Parolin) and Jackson Wolny (RPG / Kosmic), who advanced a stellar 12 positions to complete the top-five. 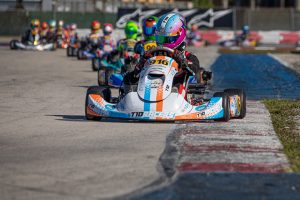 Aspen Sport KA100 Senior saw some fierce wheel-to-wheel action throughout the second day of racing, with Nicholas Terlecki (Hotz-FMS / Exprit) throwing the opening blow of the day by taking pole position for the Prefinal. Saturday’s winner Aiden Levy (Alonso Kart) reasserted his dominance up front in the Prefinal, making up a couple of spots to take the victory, with Austin Jurs (FMS / Merlin) making up ten spots to score fifth at the line. In the Final, Luke Welcome (ANSA / Tony Kart), SuperNats winner Tomass Stolcermanis (Nash / Energy) and Collin Lloyd (T1DR / Magik Kart) were the main protagonists up front, with all three holding the lead at one stage. In the end, Lloyd emerged to take popular victory over Stolcermanis, while Welcome capped off the weekend in third. Jurs came home just 3.5 seconds back in fourth, and Saturday winner Levy ended a successful weekend in fifth. 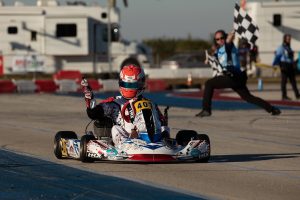 Luis Schiavo handled the Kart Racing Solutions KA100 Master class on Saturday, but his competition raised their game on Sunday morning as Michel Garrido (Alessandros / Redspeed) topped the charts in qualifying. Schiavo started third in the Prefinal and was into the lead by lap nine, just edging out Garrido as former Champ Car driver Mario Dominguez (Alessandro / Tony Kart) bested Texan Miguel Mier (Orsolon / Tony Kart) and Ruben Rovelo (Alessandro / Tony Kart) for third. In the Final, Schiavo retired early with a brake issue, and this left Garrido to dominate the action enroute to an 8.194-second win. Dominguez was running second until the late going when a broken rear bumper resulted in the meatball flag, which advanced the scrap between Mier and Rovelo from a fight for the final podium step to the battle for second. Mier came out with the position in this duel, taking second over Rovelo. Diego Rodriguez (Alessandros / Tony Kart) finished alone in fourth while Elliot Van Rankin (Alessandros / Tony Kart) edged Alex Dal Bon (LFB Racing / Tony Kart) for the final spot in the top-five. 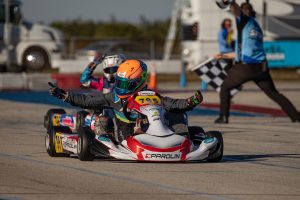 Enzo Vidmontiene (MottazSport / Parolin) almost had a perfect day in terms of championship points for Rolison Performance Group X30 Junior, with the Florida native grabbing fast time in qualifying, along with a win in both Prefinal and Final. Vidmontiene had to battle it out with RPG teammates Ernesto Rivera (Kosmic) and Jackson Wolny (Kosmic) throughout the Final, along with Steven Miller (Alonso Kart) as well. Miller had pace all weekend and looked like he would be able to challenge for the win, until contact with Rivera at turn 5 put him out of the race. Wolny delivered a phenomenal performance to hold onto Vidmontiene for second, scoring his first podium of the 2023 season. Despite the contact with Miller, Rivera would make it home to the line in third, with teammate Max Taylor (RPG / Kosmic) right behind him. Brazilian native and Florida resident, Leonardo Escorpioni (Zanella/Tony Kart), ended his weekend as the final driver in the top-five, making up six spots from his starting position in the Final. 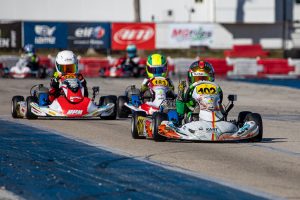 In Saturday’s DNJ Intermodal Services Mini Swift main event, Lucas Palacio (Kart Republic) put on a stellar show driving from 29th to the win. While several other drivers put themselves in position to grab Sunday’s final, Palacio stepped up to the plate to deliver yet another thrilling performance. After Ethan Tovo (Tovo Motorsports / Parolin) topped the qualifying charts over Michael McGaughy (RPM / Parolin), it was Alessandro Truchot (Parolin USA) who led the way in the 10-lap Prefinal. Tovo took the lead at the green flag of the Final and was up front until lap five as Truchot went to the lead and paced the next 14 circuits. Over the final third of the race, Palacio again become the star as he was laying down laps that had him on pace to challenge for the win on the final lap. The diminutive Virginia driver started fifth but in the late going made his way past Kia Johnson (Benik), Truchot, and McGaughy before passing the leader on the final circuit to score a 0.412-second win, turning the race’s fast lap on lap 19 in the process. McGaughy emerged in second, while Truchot held on for third. Johnson added his second top-five finish of the weekend in fourth, thankfully not having to come from 42nd, like he did on Saturday. Devin Walz (SCR / Kart Republic) completed the top-five, advancing two spots from seventh. 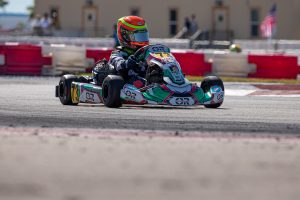 The dominance of Antonio Pizzonia Neto (Orsolon Racing / Parolin) continued in the RYSA Racing Micro Swift category, as the young Brazilian driver once again swept all three on-track sessions. His main event win featured a 5.295-second cushion over Valentino Santillan (Parolin), although it was Santillan who also delivered a stellar drive by storming forward from 10th to second over the 20-lap main event, posting the fastest time in the process. Joao Paulo Bonadiman (Orsolon Racing / Parolin) ran in the top-four all race and improved on his fourth-place finish from Saturday to advance onto the podium in third. Maxwell Macha (SLA Karting / Parolin) and Colton Schniegenberg (GWR / Energy) completed the top-five.

The opening rounds of the SKUSA Winter Series had all that anyone could have hoped for and none of what no one wants – red flags. The weekend went clean and green from start to finish, and while the on-track intensity certainly rose to a new level on Sunday, nothing major occurred. The drivers and teams will be back in action to decide the championship titles in a month’s time, when Rounds 3 and 4 will be waged on February 10-12 at the same AMR Homestead-Miami Motorplex facility, this time running in the clockwise direction. EKN will be trackside once again to provide the lap-by-lap coverage.