Turney and Isambard score wins to start the championship chase 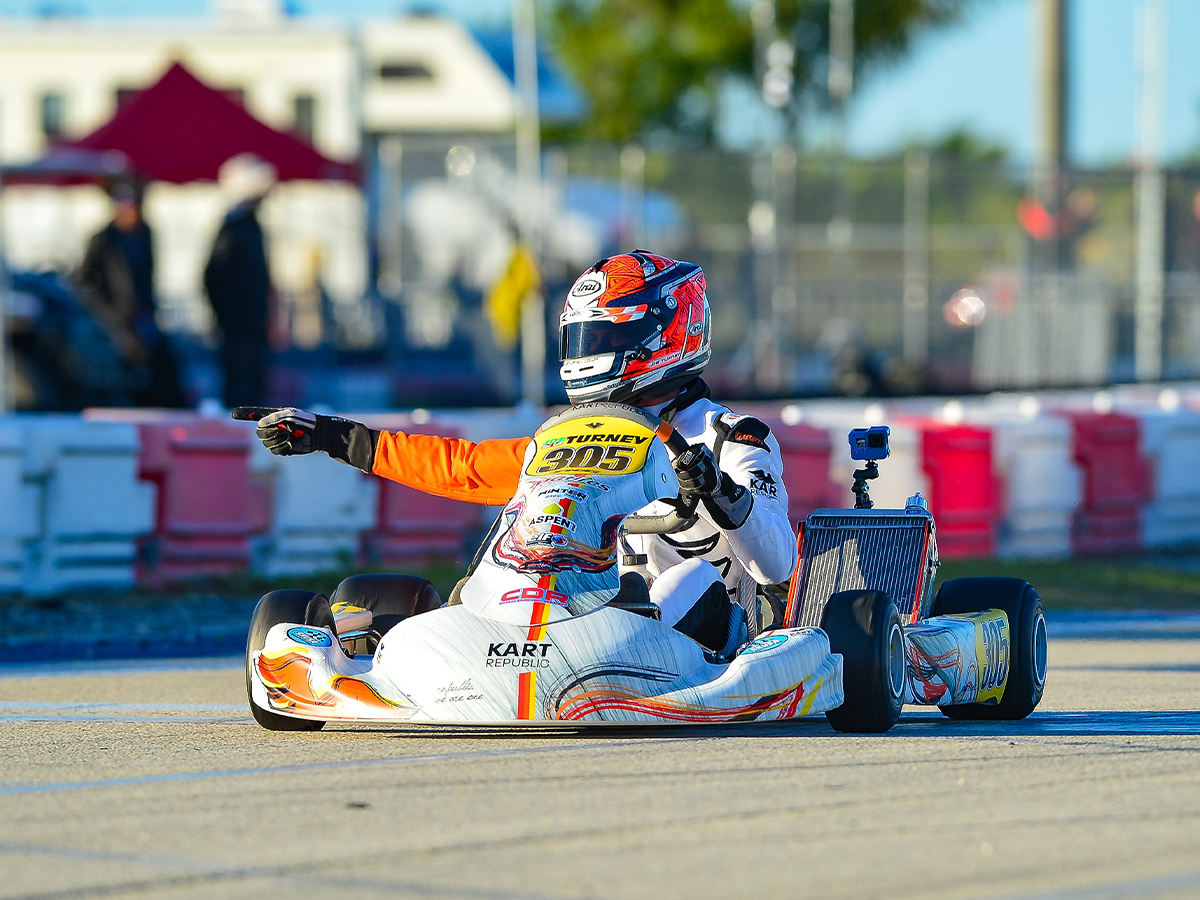 After an incredibly successful and historic 25th running of their SuperNationals, Superkarts! USA fired up the 2023 season at the AMR Homestead-Miami Motorplex Presented by MG Tires with the first round of their annual Winter Series. The two-weekend, four-round series kicked off in style with over 240 entries on the books and a perfect day of weather, albeit much cooler than is expected for Florida in January. The opening event on the 12-turn / 0.7-mile circuit was run in the counter-clockwise direction, which is referred to by the best in the paddock as the rougher of the two layouts. Despite all the challenges, Kart Republic factory driver Joe Turney scored a big win in the X30 Senior class, while Alan Isambard (ANSA Motorsports / Formula K) walked to the victory in Pro Shifter. 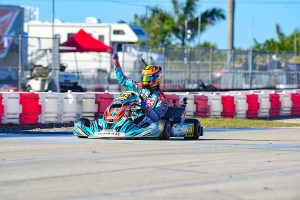 After topping qualifying and the Prefinal impressively, Rolison Performance Group’s Ryan Norberg (Kosmic) did not get the start he’d hoped for in the 22-lap Speed Concepts Racing X30 Senior main event, dropping back to fifth by lap five. Turney capitalized on the opening lap chaos to grab a lead that the British driver would not relinquish. Norberg settled into the race after the early lap issues, and then worked his way back to second, but he could not eliminate Turney’s cushion, which ended up being 1.521 seconds at the line. It was an impressive debut for the UK driver who is making his first trip to the United States. Behind Turney, Norberg made moves to get past Alessandro de Tullio (MottazSport / Parolin) and then Austin Garrison (SCR / Redspeed) to get back to second, but a pushback bumper penalty dropped him to fourth in the final tally, advancing both back to their previous positions. PSL Karting’s Matheus Morgatto (Birel ART) had to battle all day long after qualifying 10th, moving to eighth in the 12-lap Prefinal. He worked with the team to dial in their chassis and it paid off with an advancement to fifth in the main event. 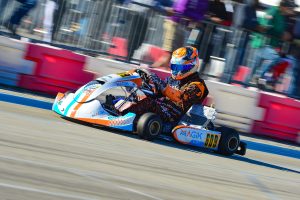 AJ Myers (Magik Kart) and Alan Isambard (ANSA Motorsports / Formula K) faced off in the PSL Karting Pro Shifter class, with Myers leading the way in qualifying. Isambard kept the multi-time SKUSA Pro Tour champion honest, pressuring him throughout the prefinal. Despite finishing second, Isambard advanced to the pole for the main event after Myers was penalized in post-race tech for not having a catch can on this cooling system. This put Myers at the tail of the field for the main event start, and Isambard would not let the advantage slip away. The defending SKUSA Winter Series champion got the holeshot and checked out, holding an almost three-second lead over Myers through to the checkered flag. Myers worked quickly through the field, but once clear, he could not eat into Isambard’s cushion as they were running virtually identical times. Giorgio Carrera (International Motorsports / Tony Kart) capped the podium in third. Davide Fore (Goodwood Kartways / Intrepid) and Gabriel Kawer (PSL Karting / Birel ART) finished fourth and fifth, respectively.In the Greyhound Racing Seats Master Shifter class, Scott Barnes (Magik Kart USA / Magik Kart) was the man to beat all day, outgunning Patrick Otto Madsen (ANSA Motorsports / Formula K) in all three sessions. Barnes ran a flawless main event to win by over four seconds. Dan Breitenstein (RYSA Racing / Birel ART) completed the top-three. 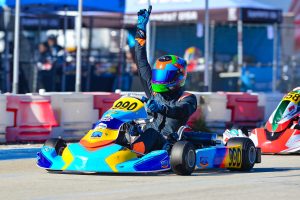 After posting an impressive top-10 performance at SuperNationals in November, Aiden Levy (FA) came into 2023 carrying that momentum into Aspen Sport KA100 Senior, setting the fastest time in a 29-kart-deep qualifying session. He dropped down to fourth in the Prefinal, in which Peyton Phillips (RPM / Tony Kart) took the win and the pole position for the Final, but there was more to come. Frankie Mossman (Tesoro Raceworx / CRG) joined the pair up front to fight for the opening round of the year in the final, with Mossman and Phillips swapping the lead throughout the race, up until Levy made the pass for the lead in the closing stages, taking his maiden SKUSA and National win of his career. As Mossman and Phillip battled on the final lap in the turn five hairpin, Levy pulled a stunning over-under to beat them both to turn seven. Levy held them off for the remainder of the lap to score the popular victory. Phillips and Mossman followed Levy across the line, while Collin Lloyd and Austin Jurs (FMS / Merlin) made up the top five. 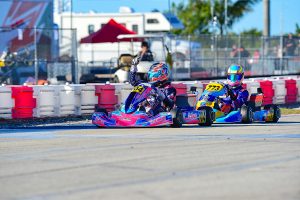 Ernesto Rivera backed up his 2022 SKUSA SuperNationals X30 Junior victory with another win to start the new season
(Photo: OTP)

Taking top honors in the Rolison Performance Group X30 Junior category was RPG driver and newly-crowned SuperNationals winner Ernesto Rivera (RPG / Kosmic). The Mexican driver was on fire throughout all of the Saturday sessions, sitting on top of the charts from practice in the morning to the final later in the day. Rivera didn’t have it easy though, as SSKC champion Steven Miller (CDR / FA) gave him a run for his money all day long, although he was just not able to match the pace of Rivera’s AVP-powered Kosmic. Miller would settle for second on the day, but has the pace to fight again on Sunday, with Teddy Musella (RPG / Kosmic) taking the final step of the podium. Last year’s Winter Series Mini Swift champion Oliver Wheldon (JC Karting / LN Kart) started this year’s effort with a solid fourth-place finish, while Enzo Vidmontiene (Mottazsport / Parolin) gained 10 positions after staring 15th to snag the final spot in the top-five. 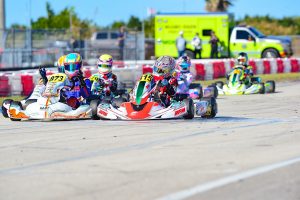 The Mottazsport KA100 Junior category saw some of the most exciting wheel-to-wheel racing we’ve seen with the final at times turning into an eight-kart fight for the lead. Steven Miller (CDR / FA) took the pole, and with Enzo Vidmontiene (MottazSport / Parolin) taking the win in the Prefinal, they seemed to be the favorites going into the final. The two would work together at the start to build a gap between the others behind, but once Vidmontiene passed Miller at the midpoint of the final, it all kicked off. With an appearance at the front from Olive Wheldon, it became anyone’s game. After a crazy final handful of laps, Miller led into the final corner with Vidmontiene leaning on him in the fight for the win. This opened the door for Jensen Burnett to pull the over-under from third to beat them both out for the corner, and Burnett just nipped Miller at the line by 0.022 seconds to take his first Winter Series win, and first KA100 win in SKUSA competition. Vidmontiene ended his Saturday performance on the third step of the podium, while Ivanna Richards (HRI / Tony Kart) and Ernesto Rivera (RPG / Kosmic) were the final drivers in the top-five. 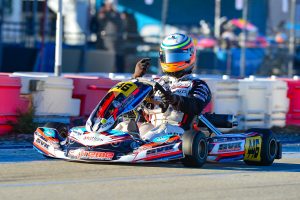 Luis Schiavo dominated the new-for-2023 Kart Racing Solutions KA100 Master category, winning all three on-track sessions. He was challenged early in the final by Ruben Rovelo (Alessandros Racing / Tony Kart), but eventually pulled away to a 1.461-second victory. The best fight of the race was waged between Michel Garrido (Alessandros / Tony Kart), Mario Dominguez (Alessandros / Tony Kart), and Miguel Mier (Orsolon / Tony Kart). Mier reeled in the Alessandros duo and was able to work his way by to assume third, but they both slipped past by late in the race to move Mier back to fifth. In the final corner coming to the flag, Dominguez drifted wide on the exit and this allowed Mier to sneak by on the side to steal fourth by just over a tenth. 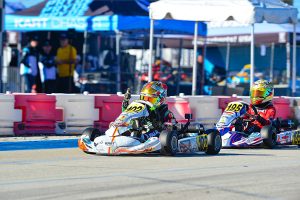 The DNJ Intermodal Services Mini Swift main event featured two incredible drives from deep in the field that highlighted the podium. Alessandro Truchot (Parolin USA / Parolin) qualified on pole and won the prefinal, but the story of the final was led by Lucas Palacio (Kart Republic) as the young driver stormed forward from 29th on the grid to take the lead with two laps to go. Palacio held his position ahead of Ashton Woon (Nitro Kart). Not to be outdone, Kai Johnson (Benik) made up a staggering 39 positions to race from 42nd to third over the 20-lap race. Tristan Murphy (RPM / Parolin) finished fourth, and right on his bumper coming across the line was Ethan Tovo (Nitro) who like Palacio and Johnson had to come from mid-pack. Tovo started 27th and sliced his way up to fifth. 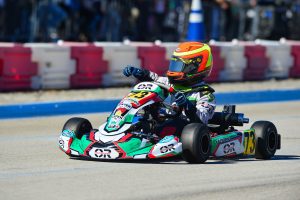 Antonio Pizzonia Neto (Orsolon Racing / Parolin) ran away and hid in the RYSA Racing Micro Swift class, steadily stretching away to a 6.749-second victory. Parker Ives (Nitro Kart) started fourth and advanced quickly to second, chased by Pasha Ali (Parolin USA / Parolin) all the way to the checkered flag. Unfortunately, Ali failed post-race technical inspection for a missing chain guard. This penalty advanced Valentino Santillan (Parolin) to third and onto the podium. Joao Paulo Bonadiman (Orsolon Racing / Parolin) drove a stellar race from 26th to finish fourth while Maxwell Macha started 28th and followed Bonadiman through the field to finish fifth. These were incredibly impressive drives by both young racers.

The drivers and teams will all be back in action on Sunday for the second round of the series.