Warren grabs three as Miles, Ruiz and Burnett double up inside the ‘World Center of Racing’ 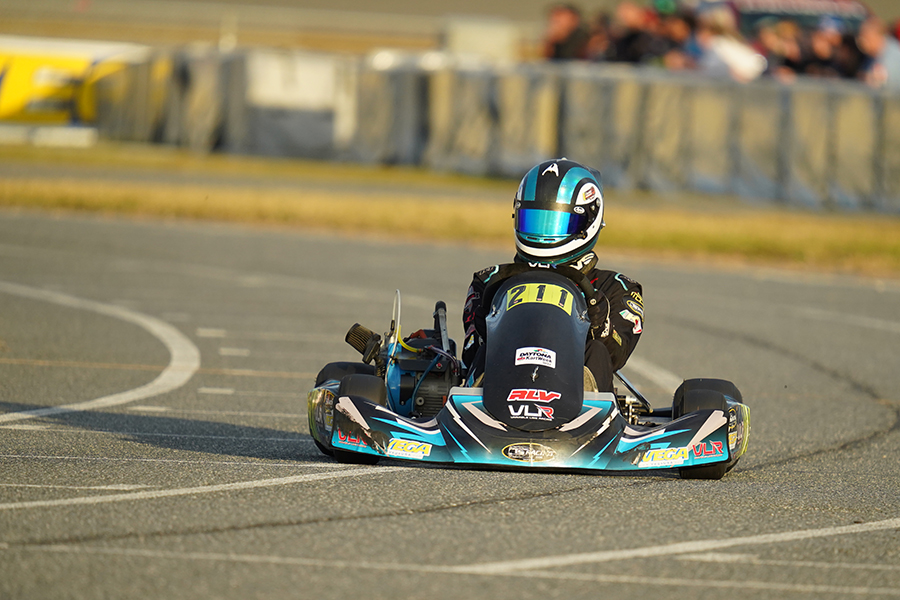 The annual World Karting Association Daytona KartWeek was held over the December 28-30 to close out the 2022 calendar year with the first event of the 2023 season. Karters from all over gathered at the Daytona International Speedway in Daytona Beach, Florida to compete in three disciplines of karting all at the ‘World Center of Racing’. The Speedway Dirt event competes on the Daytona Flat Track, while the historic Road Racing Series took on the famous road course that includes the infield and oval for three days. Inside NASCAR turns 3 and 4 is the kart track, hosting the opening rounds of the 2023 Manufacturers Cup Series. Following a full day of practice on December 28, two separate days of racing took place on December 29 and 30 featuring 309 entries in 12 categories.

Florida driver Colin Warren was nearly able to sweep both Briggs 206 categories, taking home three of the four race wins. Warren went unchallenged in Day 1 of the 206 CIK #360 class, setting fast time in qualifying and leading wire-to-wire in the Prefinal and Final. It was a 2.3-second victory ahead of last year’s Day 1 winner James Overbeck with Hunter Fox rounding out the podium. Senior rookie Christopher McKeithan was fourth with Gabe Sessler in fifth. It was the same results for Day 2, this time challenged throughout the day. Sessler was only 37 thousandths off in qualifying and led five of the 10 laps in the Prefinal before Warren moved back to the point. Warren kept everyone back in the Final, leading all 12 laps for a 3.3-second advantage ahead of Overbeck. Sessler ended up third with last year’s Day 2 winner Adam Maxwell in fourth and Jake Sessler rounding out the top-five.

Warren had a sweep in process on Day 1 for the 206 CIK #380 class, setting fast time in qualifying and leading all 10 laps of the Prefinal. The main event was shortened to five laps due to an earlier red flag delay and the sunset approaching. Last year’s Round 1 winner Gabe Sessler was quick early and was able to get away to claim the victory ahead of Warren. Elmer Edmonson joined them on the podium in third with Maxwell and Cameryn Reed completing the top-five. Jake Sessler stood out in the qualifying session for Round 2 as Gabe was fourth with Warren back in seventh. Warren was able to climb his way up to the front by the end of the 10-lap Prefinal with Jake and Gabe trailing. The 10-lap Final was all Warren, leading every lap and driving away to a 4.1-second advantage. Gabe was second with Maxwell in third. Jake Sessler ended up fourth with Christopher McKeithan in fifth. 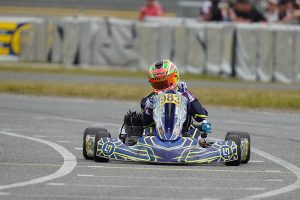 It was an amazing performance over the two days of racing for Christian Miles in the largest class of the weekend at 42 entries in KA100 Senior. Making his debut in the category in WKA competition, Miles was able to sweep each round with a perfect performance. Miles, who won both main events in KA100 Junior last year, set fast time in qualifying and won the Prefinal and Final by leading every racing lap. The margin of victory on Day 1 was 5.3 seconds ahead of Daniel Perez and James Overbeck. Drew James and Finnegan Bayliff completed the top-five. Day 2 was a similar feat, this time winning the 14-lap Final by 5.6 seconds. Bayliff and Olivier Piatek joined him on the podium with Julian Dacosta and Garrett Davis rounding out the top-five.

Two other drivers were able to double up in Daytona as well. Jensen Burnett was able to duplicate the perfect performance by Miles in the KA100 Junior division a year ago. Burnett set fast time in qualifying before leading all 10 laps of the Prefinal. Fast laps of the shortened 8-lap Final allowed Burnett to drive away to a 4.3-second margin of victory. Cameron Brinkman was second with Chris Aitken joining them on the podium in third. Austin Olds and Sarah Bradley rounded out the top-five. Day 2 was a similar performance with Burnett setting fast time in qualifying and winning the Prefinal. Burnett went on to lead all 10 laps of the Final to complete the event sweep. Eli Warren and Olds stood alongside on the podium with Bradley and Brinkman placing fourth and fifth. 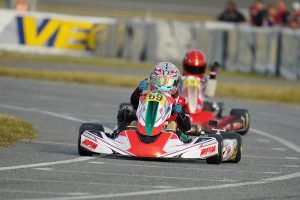 Jorge Ruiz was able to add his name to the history books with two victories in the 206 Masters class. Veteran Phil Pignataro set the pace in qualifying and won the Prefinal to open up Day 1 action. He led the opening two laps of the Final until Ruiz took control and led the remainder of the race for the victory. Kevin May was third with James Inscoe fourth and Dick Timmons fifth. On Day 2, May stepped up to grab quick time in qualifying with Jamie Bradford a close second ahead of Ruiz, all within a tenth of each other. May led all 10 laps of the Prefinal but it was Ruiz that shined in the main event. Ruiz jumped to the front early and led all 10 laps to claim a second victory. Pignataro was runner-up with May in third. Timmons and Jason Foremming completed the top-five.

The Margay Ignite Dash at Daytona celebrated its fifth time taking part at the Daytona KartWeek event. The Senior division welcomed one new winner on Day 1 with Matthew Frost. It was Frost that set fast time in qualifying, edging out 2020 winner Gavin Bayliff by 24 thousandths. Frost and Bayliff got away from the field in the Prefinal with Gavin securing the race win. The shortened 8-lap Final was controlled by Frost, as he led every lap to add his name to the winning list at Daytona. Bayliff settled for second with three-time Daytona winner Evan Stamer in third. IMSA drivers Jordan Taylor and Ricky Taylor returned to their karting roots, placing fourth and fifth on Day 1. Florida driver Jed Perkins found speed overnight to clock in the quickest time during qualifying for Day 2 with Nick Ksobiech in second ahead of Stamer. Ksobiech led the majority of the Prefinal for the race win and pole position for the Final. In the main event, it was Bayliff and Stamer that ran 1-2 for much of the race. A last lap move for Stamer secured the top spot, taking the checkered flag by 14 thousandths over Bayliff for his fourth Daytona victory. Ksobiech was third with Jordan Taylor a close fourth. Perkins rounded out the top-five. 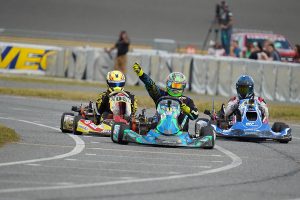 The Ignite Masters class welcomed two new winners for the ‘Dash at Daytona’, each with their own round sweep. Michael Burton was able to sweep the action for Round 1. Burton cleared the field by over two tenths in qualifying and but was shuffled back early in the Prefinal. He fought back to the front of the field to take the win before leading all eight laps of the Final to claim his victory. Two-time winner in 2021 Jeff Jewell was runner-up with Tim Hannen in third. Jamie Bradford and Jason Froemming completed the top-five. Hannen was able to put himself at the front for Round 2 in similar fashion. He cleared the field by two tenths in qualifying before leading all 10 laps of the Prefinal. Hannen went unchallenged in the Final, leading all 10 laps for a perfect day at Daytona for the victory. Burton settled for second with quick lap of the race with Jewell down to third. Froemming improved to fourth with Bradford coming from the tail of the field to fifth.

The 206 Junior division featured great racing all event. Ava Hanssen set the mark to begin Day 1, posting fast time in qualifying and winning the Prefinal. The fight for the win in the Final went down to the wire. Jared Clarke led for much of the race and held on at the line to take the victory over Sawyer Roussel and Hanssen. Josey Chambers was fourth with Ronnie Klys in fifth. Hanssen came back on Day 2 to set fast time in qualifying before slipping to sixth in the Prefinal, as last year’s winner Eli Warren grabbed the race win. Warren went on to lead all 12 laps of the Final to earn a second straight. Hanssen was second with Carter McMurray – son of Daytona 500 winner Jamie McMurray – placing third in his Junior debut. Caleb Tarter and Derek Wargo completed the top-five. 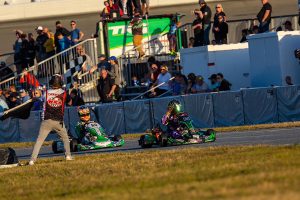 Two Cadet drivers were able to claim two victories on Day 1. Tyrone Kemper Jr. was able to win in Mini Swift and 206 Cadet Advanced category. Kemper set fast time in qualifying and won the Prefinal to begin Mini Swift before he was challenged at the front during the Final. He and Drew Walz fought for the top spot in the shortened six-lap race. Kemper was able to take the checkered flag first for his first Daytona victory in the category. Brothers Drew and Devin Walz joined him on the podium with Race Beckman and Jacob Schaible completing the top-five. Prior to that, Kemper started the day in ninth after qualifying for the 206 Cadet Advanced division. Henry Taylor set fast time in the session but was shuffled down the order in the Prefinal with Carter Barkis taking the win. Kemper was only eighth after the Prefinal, fighting his way forward in the early laps of the Final. He took the lead on lap five and drove away to his first Daytona victory by 1.2 seconds. Barkis ended up second ahead of Christopher Youtsey with Schaible and Taylor rounding out the top-five.

Devin Walz was able to secure his first Daytona victory with the win on Day 2 in Mini Swift. He and Prefinal winner Drew Walz were 1-2 in the final with Devin scoring the win. Taylor joined them on the podium in third with Schaible fourth and Sawyer Chambers fifth. It was Chambers that claimed victory in the Day 2 action for 206 Cadet Advanced. Chambers was able to hold off Barkis after taking the lead on lap three. Taylor joined them on the podium with Prefinal winner Hudson Urlin fourth and Schaible fifth. 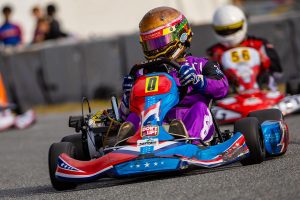 Luke Giglio was the other driver to claim two victories on Day 1 in Cadet action. Giglio’s first win came in the 206 Cadet class. He won by a half-second in the reduced eight-lap race ahead of William Roberts and Emerson Lane. Daniel Dragnov and Danny O’Gara completed the top-five. He then followed it up with a win in Micro Swift class, taking the checkered flag 1.9 seconds ahead after a shortened six-lap run. Colton Schniegenberg and Prefinal winner Holden Myers joined him on the podium with Emerson Laine and top qualifier Kade Kasper placing fourth and fifth.

It was Kasper that emerged as the top driver in Micro Swift in Round 2, winning the Prefinal and leading all 10-laps of the Final for his first Daytona victory. Top qualifier Schnienberg was second with O’Gara in third. Myers and AJ Stoner completed the top-five. Stoner overcame a flip on Day 1 to return as the victor in 206 Cadet in Round 2. Stoner moved to the lead on lap two of the Final and showed the way for the remainder of the 12 laps for the victory. Prefinal winner Giglio was second with Tanner Barsch placing third. Top qualifier Roberts was fourth and Draganov in fifth.

Several prizes and cash awards were handed out over the two days of racing. Among the biggest was the weekend winners in Briggs 206 Junior and Briggs 206 Senior with Ava Hanssen and Colin Warren earning a three-day Formula Racing School Award with Skip Barber Racing School. Top-10 in KA100 Senior and KA100 Junior were provided cash awards, including $2,500 for Christian Miles and Jensen Burnett for the double win event. Colin Warren took home the top prize of $1,000 in both Briggs 206 360 and Briggs 206 380. Mini Swift overall winner Drew Walz received a $500 payday with top-three in Micro Swift earning Game Stop Gift Cards. Top-three in Briggs 206 Junior and Masters were awarded TS Racing Gift Cards along with WKA Gold Cup 2023 entries. Briggs 206 Cadet and Cadet Advanced were awarded the same, with Game Stop Gift Cards instead.