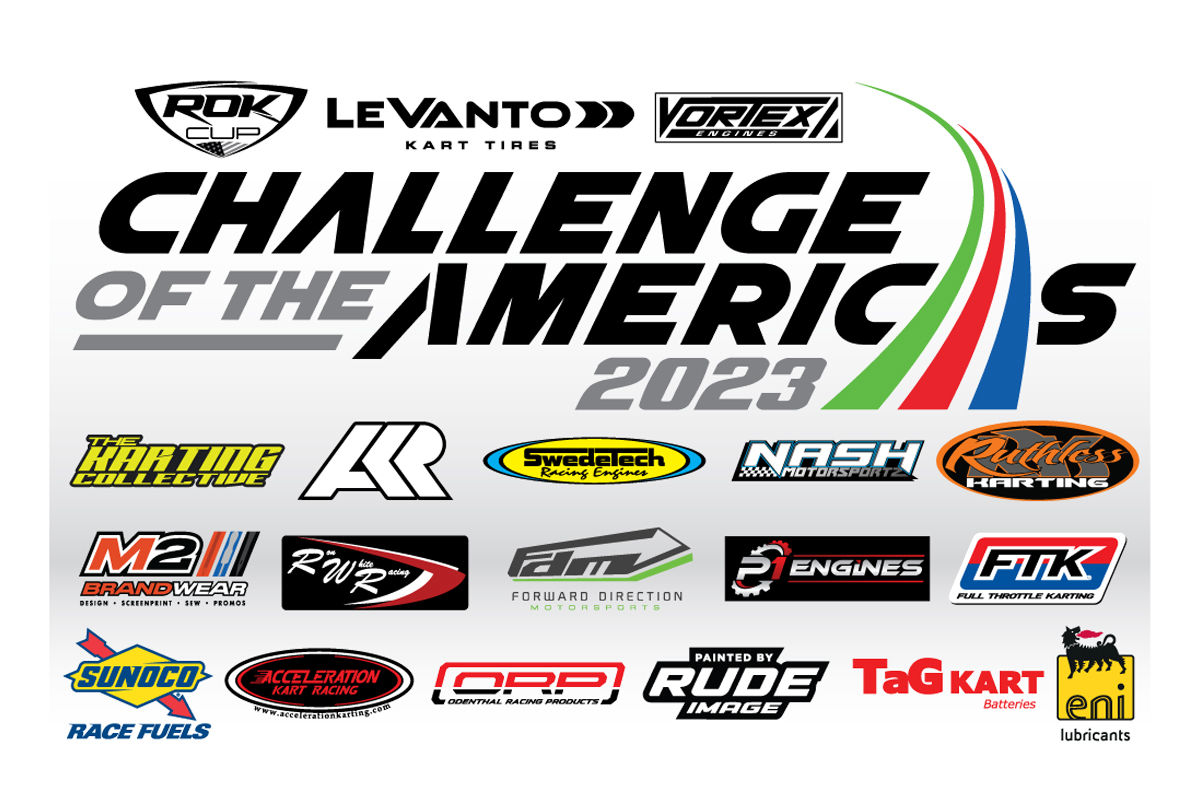 Challenge of the Americas is set to begin its 16th season when action begins in February 2023 in Tucson, Arizona. The international west coast winter series under the ROK Cup USA platform opened registration last week for first event of 2023, set for February 3-5 at the Musselman Honda Circuit. The series is moving forward with more details surrounding the program and first event, including securing series sponsors and supporters.

The Challenge of the Americas is happy to announce the 2023 class sponsors. Andy Seesemann, owner of FTK Promotions, stated “It is difficult to conduct a series championship without the support of not only the racers and teams, but also the industry itself. We’ve had many great partners and supporters over the 16 years of the Challenge. This year is no different with many of the top teams and shops showing their support with a class sponsorship.”

2023 Challenge of the Americas sponsors include:

Learn more about each class sponsor by visiting the Challenge of the Americas Partners Page.

In addition to class sponsorship, other industry members will help to support the continuation of the Challenge raffle program during the weekend driver’s meeting. Acceleration Kart Racing is set to provide gift card and other products throughout the season. Odenthal Racing Products has confirmed to provide two camera mounts to be raffled at each weekend driver’s meeting. Courtney Concepts is providing the new ‘TAG Kart Batteries’ to be awarded each weekend as well. Add in LeVanto Tires, Challenge swag, and much more will be in the handed out each weekend during the 2023 Challenge of the Americas.

A new collaboration with Rude Image is helping to establish a prize for the 2023 season. At the final podium ceremony of the season on April 16 at Sonoma Raceway, one helmet painting service by Rude Image will be raffled off. This raffle will include all the drivers who have been loyal to the entire Challenge series, competing in all six rounds of the program and did not achieve a championship podium position. Every driver that qualifies will be placed into a drawing with one name pulled out as the winner. The winner must be present at the podium ceremony to win the prize.

Registration for the 2023 Challenge of the Americas is open at challengekarting.com. The championship program begins on February 3-5 at the Musselman Honda Circuit in Tucson, Arizona. Learn all you need to about the weekend at the Event Page.

The host hotel for the Tucson weekend is the Hampton Inn & Suites Tucson Tech Park, located just 4 miles north of Musselman Honda Circuit, with the room block expiring on January 1, 2023. The room block is sold out for the Friday and Saturday nights, however, the hotel has a few remaining for Wednesday and Thursday nights if needed. The Four Points by Sheraton Tucson Airport has only King rooms available as part of Challenge room block, available until January 1, 2023.