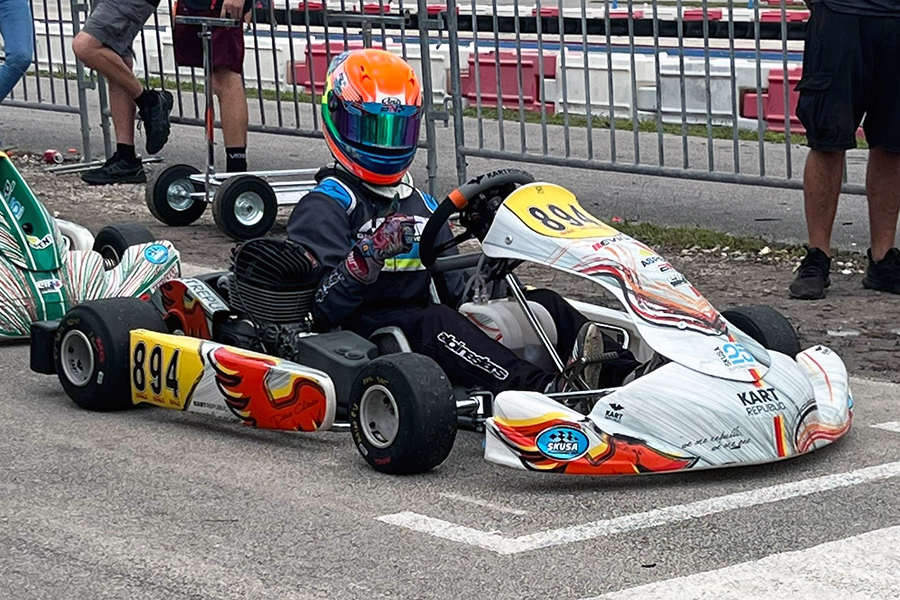 The final stop on the 2022 campaign for Enzo Vidmontiene brought the MottazSport / BN Engines operation to the AMR Homestead-Miami Speedway Motorplex presented by MG Tires for the last round of the Sunshine State Karting Challenge. Vidmontiene went into the weekend fighting for the IAME Junior title after a close battle throughout the entire season, just 66 points back on the class leader going into the final two rounds. Vidmontiene would also be running double duty, making a return to the KA100 Junior class, which he was crowned champion of in 2021. Despite the changing weather conditions at the facility south of the Miami area, Enzo was able to secure three victories over two days of competition, securing another SSKC championship in the process. 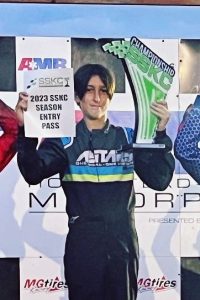 Enzo Vidmontiene stood on the podium three times during the Sunshine State Karting Challenge finale weekend in Homestead, in addition to claiming the IAME Junior championship

In IAME Junior, Vidmontiene was the class of the field throughout the weekend, winning both days, but having to work for them after just missing out on pole position each day. Going into the weekend, the title race was close between him and two others in the championship standings. After qualifying less than a tenth of a second off the pole position time, Vidmontiene went into the Prefinal starting on the outside of the front row. During a hectic race, Vidmontiene found himself battling with others in the top-five but would lose spots in the ladder half of the race demoting him down to seventh. During the Final, Vidmontiene would slowly work his way through the field lap by lap and established himself as the leader halfway through the race. From there, Enzo put down the quickest laps of the race en route to his second victory of the season.

The pressure to perform was increased for Vidmontiene with the championship title on the line based on the results of Sunday’s racing. His win, however, the day before would be a confidence boost going into the final day of the season. Vidmontiene came across the line in qualifying with the fourth fastest lap, and again would have to start from the outside lane in the Prefinal, this time one row back. Vidmontiene had a controlling run, getting past two karts in front of him, promoting him up to second where he would finish. Enzo fell back to fifth off the start of the Final, but had a carbon copy drive of Saturday, slowly making his way back to the point. He took over the lead at the halfway point, and once again posted the quickest laps of the race toward the end, securing the championship with his third victory in six rounds of racing.

Vidmontiene made his first and only appearance in the KA100 Junior class in the final weekend of the season but drove as if he was a seasoned veteran in the class, grabbing two podium finishes on the weekend. On Saturday, he narrowly missed out on the pole position, and would see the green flag in second for the Prefinal. Vidmontiene held the spot through the Prefinal and despite being consistently one of the fastest karts on track, drove to the runner-up spot in the penultimate day of the season for KA100 Junior. Vidmontiene and the MottazSport / BN Engines team found enough pace to secure pole position for Sunday’s races. Enzo went unchallenged in both the Prefinal and Final, taking the main event victory by eight seconds to his nearest rival, an impressive run for the highly skilled 29-kart class.

The focus now turns to the 2023 season with Vidmontiene set to compete a full season on the calendar with MottazSport / BN Engines. Enzo, however, will be competing aboard a new chassis, now set to compete with the Parolin brand during the 2023 season. The schedule includes the SKUSA Winter Series, the United States Pro Kart Series, SKUSA Pro Tour, Sunshine State Karting Challenge and special one-off events that include ROK Vegas and SKUSA SuperNationals 26.

Be sure to follow the progression and racing career of Enzo Vidmontiene by following him on Instagram at @enzo_vidmontiene.