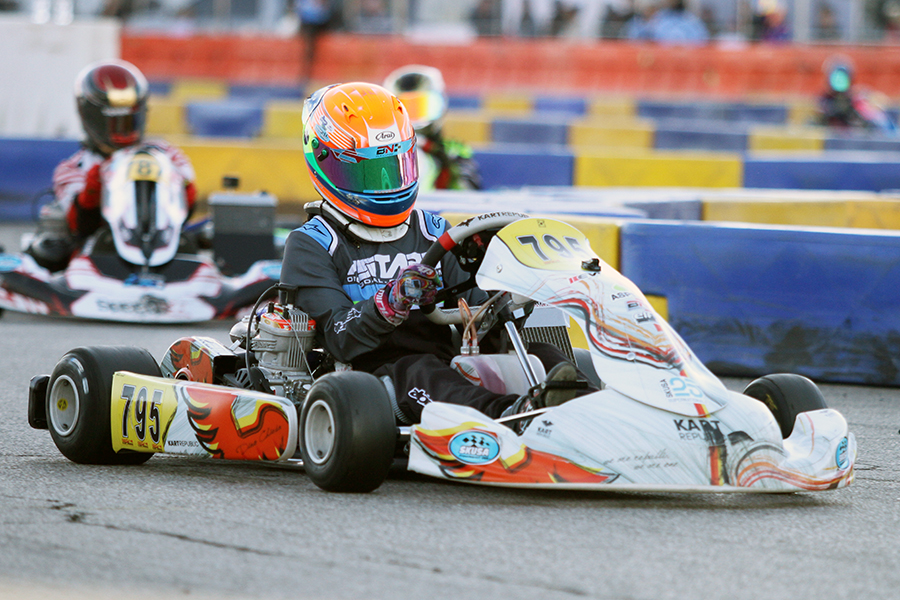 It was a proper ending to the rookie Junior season at the national level for Enzo Vidmontiene last month in Las Vegas. The Florida driver took part in the Superkarts! USA SuperNationals 25 outside the Rio All-Suite Hotel & Casino on November 16-20, competing in both the X30 Junior and KA100 Junior divisions aboard a Kart Republic chassis with his new home at MottazSport / BN Engines. The new combination put the 2021 SuperNationals Mini Swift winner toward the front of the field all week long, coming away with two top-10 finishes in the SuperSunday main events.

Following the debut with MottazSport / BN Engines and Kart Republic at the United States Pro Kart Series finale in September, Vidmontiene took part in the IAME USA Grand National Championship event at the GoPro Motorplex in October. Enzo was among the top-five throughout the event, serving up as a great warm-up for the SuperNationals with the qualifying, three heats, Prefinal and Final format. In the main event for X30 Junior Pro, it was a fourth-place finish for Vidmontiene. 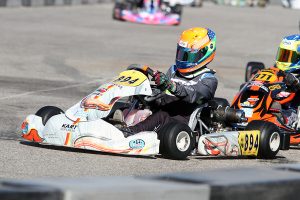 Enzo Vidmontiene finished provisionally to third in the KA100 Junior main event at SKUSA SuperNationals 25 until a PBB penalty dropped him to seventh in final results (Photo: eKartingNews.com)

The momentum was on the side of Enzo heading into Vegas for the five days of competition for SKUSA SuperNationals 25. Each day was split between the KA100 Junior class in the morning group and X30 Junior in the afternoon sessions. Vidmontiene qualified 11th in his KA100 Junior debut in a field of 67 drivers. The field was split in half for the heat races, with Vidmontiene shining over the three rounds. Starting from row three in each heat, Enzo was able to put his MottazSport / BN Engines / Kart Republic to the front, crossing the line first in all three heat races. The second heat race was marred by a three-second pushback bumper penalty, dropping him to eighth. Those results elevated him to an inside row two starting position for the main event. While the pace was there, Enzo was never able to lead in the 20-lap race, holding second for several laps before he was shuffled toward the tail of the lead group. After slipping to 10th, he fought his way back up to the third spot by the checkered flag, only to suffer a pushback bumper penalty of three seconds to classify him seventh in the final results.

“I felt very confident throughout the week in the KA100 class,” commented Enzo Vidmontiene. “The chances for me to battle for the overall victory were high, but all the drivers in front were racing very intensely with several bumping and crashing. I was a victim of some contact, putting me behind. I never gave up and raced until the checkered flag. My pushback bumper was not because of an error by me, and took me off the podium, leaving me very upset with the finishing position.”

The second half of the SuperNationals 25 for Vidmontiene was in the X30 Junior class that he had competed in all season. It began very similar to the morning class, qualifying 11th out of 48 drivers in the field in his MottazSport / BN Engines / Kart Republic entry. Enzo drove to finishes of 10th, 14th and 13th in the heat races, staying out of danger and finishing every lap. That elevated him to eighth for the main event grid, starting from the outside of row four. The 20-lap race featured a lot of heavy racing throughout the early portion of the race. He was shuffled back to 10th, where he recorded his fast lap of the race just after the mid-way point. There was more exchanging for position in the following laps before he settled in to finish ninth in his first X30 Junior start at the SuperNationals.

“We stayed out of trouble in X30 and continued to find the right pace for the main event on Sunday,” added Vidmontiene. “Our starting spot put us in position to battle for the victory and podium, however, we suffered some lost pace after the early laps of the Final. It was unfortunate to not fight for the win in the end, but we came away with two top-10 finishes in my first Junior start at the SuperNationals. I want to thank everyone for their support here in Vegas and throughout the 2022 season.”

Vidmontiene and the MottazSport / BN Engines combination will close out the season with one final race in the 2022 calendar year, competing at the Sunshine State Karting Challenge, set for December 17-18 at the AMR Homestead-Miami Motorplex presented by MG Tires in Florida.

Be sure to follow the progression and racing career of Enzo Vidmontiene by following him on Instagram at @enzo_vidmontiene.