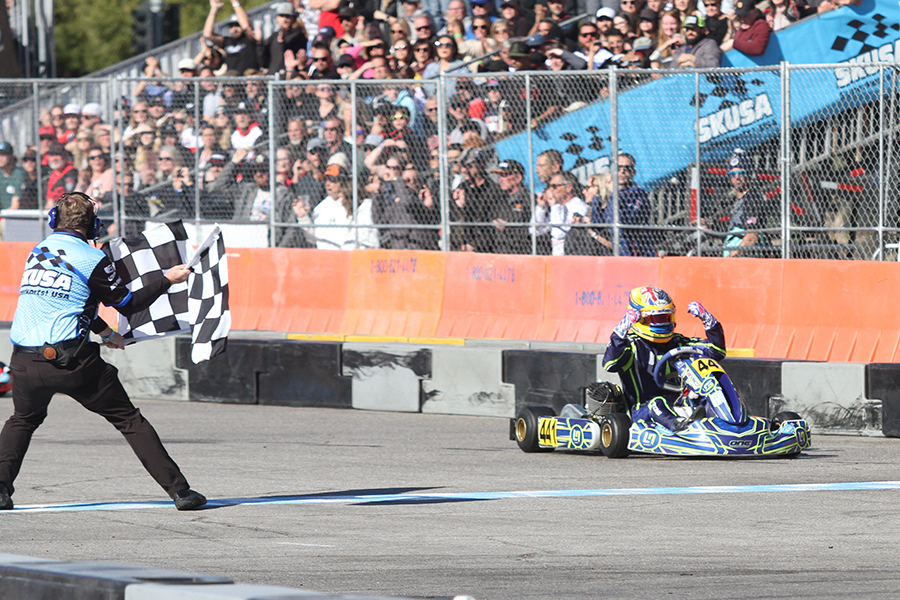 One of the largest karting events in the world was contested on November 16-20 in Las Vegas with several OTK USA drivers and teams taking part in the Superkarts! USA SuperNationals 25. The silver anniversary event was held outside the Rio All-Suite Hotel & Casino, hosting 10 categories to compete over five days to decide the winners on SuperSunday. OTK claimed 30% of the wins, thanks to the performances of Racing Edge Motorsports driver Martin Stone along with Rolison Performance Group duo of Ernesto Rivera and Jackson Gibson, including the three brands of LN Racing Kart, Kosmic and Tony Kart.

The KA100 Master category made its debut at the SuperNationals this year, welcoming a sold-out field of 48 drivers competing. OTK was up front all weekend long, thanks to former SuperNationals winner Renato Jader David (Orsolon Racing / Tony Kart) setting fast time in qualifying and winning all three heat races. It was a four-driver fight for victory in the main event, including Renato and Martin Stone (REM / LN Racing Kart). On the final circuit, Stone went from third to first through the opening two corners and held on through the last lap to take the checkered flag, becoming the inaugural victor. Renato followed in second with Danillo Ramalho (REM / Kosmic) putting three OTK drivers into the top-five. Johnny Blair (Rolison Performance Group / Kosmic), Miguel Mier (Rolison Performance Group / Kosmic) and Bryn Nuttall (MottazSport / Gillard) finished seventh, eighth and ninth to make it six inside the top-10.

Ernesto Rivera (Rolison Performance Group / Kosmic) was able to shine on SuperSunday with a breakthrough victory in the X30 Junior category for his first career win in the class. The category was a sweep for OTK, led through the opening days by SKUSA Pro Tour and USPKS champion Caleb Gafrarar (Rolison Performance Group / Kosmic). Gafrarar led the way in qualifying and scored the win in all three heat races to start from the pole position. He was shuffled back early at the start of the main event but fought his way back to the point by lap seven. Rivera, who qualified second, suffered a DNF in the opening heat race but finished top-10 in the other two to earn a P13 starting spot for the Final. He was able to knife his way forward and by lap 10, took the lead away from Gafrarar. From there, Rivera led the remaining distance to record the emotional and memorable victory. Gafrarar made it a 1-2 OTK / RPG finish with Jesus Vasquez Jr. (Nash Motorsportz / EOS) and Cameron Brinkman (Mike Doty Racing / LN Racing Kart). A total of eight drivers aboard OTK frames finished inside the top-10 with Brodie Yendle (Rolison Performance Group / Kosmic) sixth, Teddy Musella (Rolison Performance Group / Kosmic) seventh, Anthony Martella (Ryan Perry Motorsport / Tony Kart) eighth and Sebastian Wheldon (JC Karting / LN Racing Kart) in 10th. 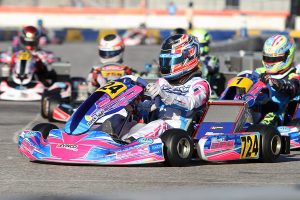 The other breakthrough victory for an OTK driver at the SKUSA SuperNationals came via the Micro Swift category. Jackson Gibson (RPG / Kosmic) qualified fourth and held that position after the heat races to start the Final from the outside of row two as the leading OTK kart on the grid. Gibson kept himself in the hunt the entire first two-thirds of the race before he made his move for the lead with four laps remaining. It was a fight after that to the very end, and Jackson held on to take the checkered flag for his first SuperNationals triumph. Nicolas Orbezo (Iron Rock Motorsports / Kosmic) was the end-cap of the top-10, finishing 10th.

There were seven OTK drivers in the top-10 as well in the competitive X30 Master division. Renato Jader David (Orsolon Racing / Tony Kart) was among the top contenders all week, setting fast time in qualifying and winning one of the heat races to retain the pole position for the Final. In the race, Renato led the early portion before settling into third, eventually promoted to second after penalties to lead the way for OTK, earning his fourth straight podium finish by the 2016 winner. Two-time SuperNationals winner Ben Cooper (Rolison Performance Group / Kosmic) was promoted to third in his first outing in the class while USPKS champion Danillo Ramalho (Racing Edge Motorsports / Kosmic) joined them on the podium in fifth. Aussie Jace Lindstrom (Team Benik / Kosmic) was a surprise contender on the week, placing sixth with Dylan Albiani (Ryan Perry Motorsport / Tony Kart), SKUSA Pro Tour champion Mario Barrios (Rolison Performance Group / Kosmic) and Matt Johnson (Nash Motorsportz / EOS) rounding out the top-10 for OTK drivers. 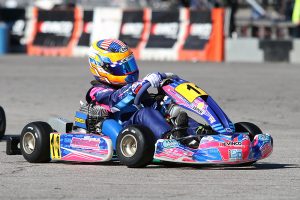 Jackson Gibson opened up SuperSunday at the SKUSA SuperNationals with victory in Micro Swift (Photo: eKartingNews.com)