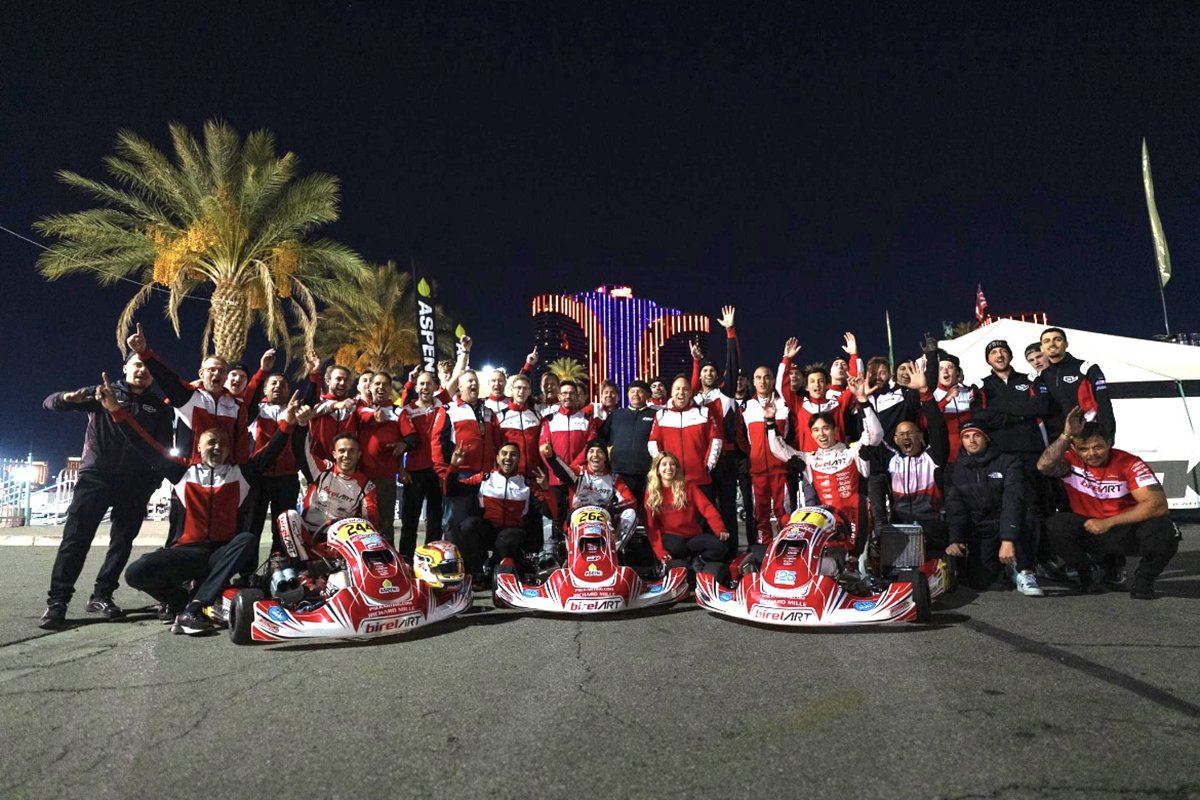 Kicking off the weekend Thursday with qualifying, BirelART North America earned one pole position at the hands of Pedro Hiltbrand. Taking on the KZ class, Hiltbrand was the dominant gearbox driver of the weekend as he was able to turn his pole position into a SuperNationals victory on Super Sunday. Riccardo Longhi improved from his 12th-place qualifying effort to cross the line fourth, just ahead of Jake French in fifth as three BirelART North American drivers celebrated on the five-place SKUSA SuperNationals podium. Continuing their strong performance in the KZ class, ROK Vegas ROK Shifter winner Marijn Kremers was able to finish fifth while Christian Bertuca was eighth, adding two more drivers to the top-ten, five BirelART North America competitors in total.

KZ Master proved to be another victorious class for the potent squad as Antonio Pizzonia pushed his machine from a fourth-place effort in qualifying to stand on the podium on Super Sunday. Scoring his first career SuperNationals win, Pizzonia proved to be the class of the field when it counted in Sunday’s main event. Perennial front-runner Jordon Musser improved from a disappointing qualifying result due to a flat tire to improve throughout the five-day event to come home sixth.

With a stacked X30 Master field for the 2022 edition of the event, it was Kip Foster who led the BirelART North America duo in qualifying with a solid fourth-place result while Tom Grice was tenth. In the end, it was Grice who found his way to the front of the field to climb to the top step of the podium on Super Sunday to win the X30 Master class with Foster joining him on the podium in fourth.

Pulling double duty on the weekend, Kremers also battled near the front of the field in the X30 Senior class. Qualifying 13th, Kremers methodically moved his way forward to eventually finish Super Sunday in the seventh position. Fellow X30 Senior driver Diego Ramos battled hard in the top-ten but contact in the main event sent him down the running order and a result that he did not deserve.

One additional top-ten over the SuperNationals 25 event weekend was in the hands of KA100 Senior driver Jai Brown. Qualifying 11th but working forward through the three heat races, Brown ended his weekend with a solid seventh-place finish.

For more information to become part of the BirelART, Ricciardo, Charles Leclerc or TM Racing dealer networks or information on how to join the PSL Karting / BirelART North America Race Team for the 2022 season, please contact Kevin@PSLKarting.com.