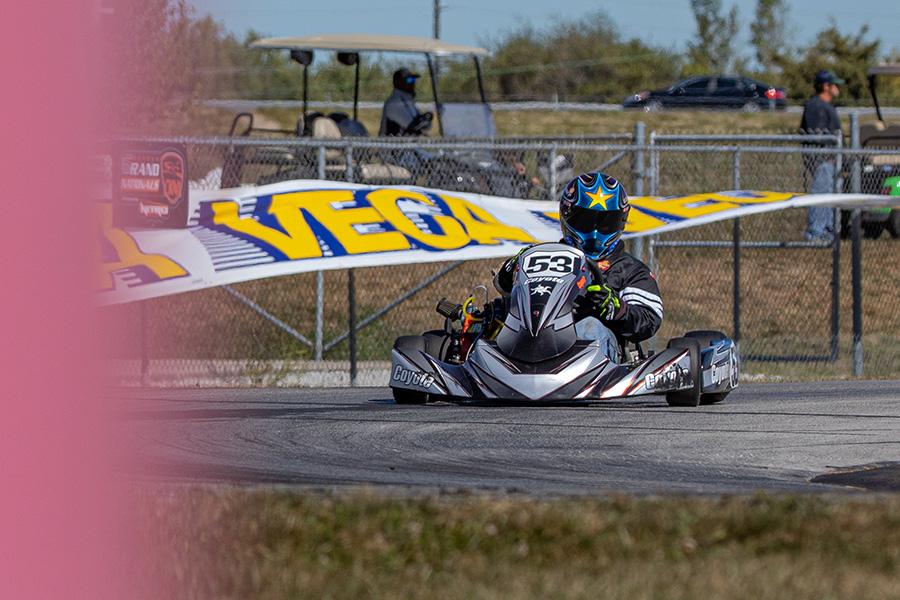 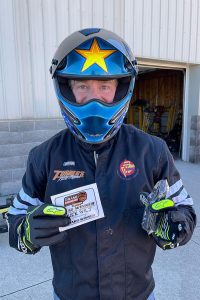 The sport of karting is full of history here in the United States, dating back to its creation in the late 1950s. The craze spread throughout the country and throughout the world. Here in the USA, familiar names make you think about the history of the sport, including those who became superstars, champions, and of course legends. Right now, there is no other legend in the Briggs & Stratton 206 world then Ryan Cassity, who etched his name as the second winner in the Legends class at the Cup Karts North America Grand Nationals 6, held on September 29-October 2 at the New Castle Motorsports Park.

Cassity is among the longtime Briggs competitors, earning victories and championships at the local, regional and national level. The 2022 season was a successful one for Cassity at the regional level, securing the CKNA North Division championship in Legends by winning six of the eight rounds. In addition, Cassity added a win in the hotly contested Senior Medium category at the Michiana Raceway Park event.

He took that momentum into the end of the season where Cassity was put up against 38 drivers from across North America to compete for glory in the Legends category at CKNA Grand Nationals 6. Cassity showed front running pace throughout the practice sessions leading up to Friday’s qualifying session, where he secured fast time by just over half a tenth aboard his Coyote chassis, claiming the pole position for the following day opening heat race. 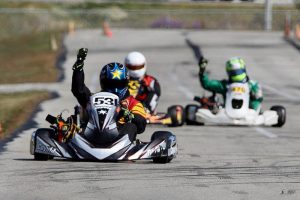 The central Illinois native had a relatively easy go at it in Heat 1, with him retaining the lead for most of the event after a quick challenge for the lead by Jamie MacArthur that saw him drop down the order later in the race. Cassity came across the line at the end of the eight-lap opening round ahead by 1.2 seconds over the man whom he would fight for the win the rest of the weekend, CKNA Grand Nationals 5 winner Todd Baron. Although Cassity held the lead for the entirety of the race in Heat 2, Baron helped to push him and Cassity away from the pack by over three seconds at the line.

The third heat once again saw Cassity and Baron up front, this time Cassity was put under pressure and gave up the lead on lap three, only to get it back on the following lap where he would stay for the remainder of the heat race. By sweeping the Heat races, Cassity had done everything he needed to do in order to secure the pole position for the Final on Sunday, where the race length was doubled, and competitors had twice the amount of time to mount an attack on the Coyote pilot. 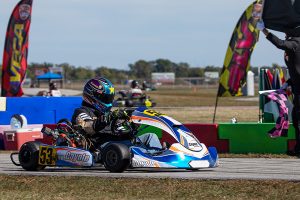 Once the green flag dropped on Sunday for the Final, Cassity avoided the fighting behind him to create an early cushion to the competitors behind him. Later on the opening lap, his main rival on the weekend, Baron, got caught up in the Lap 1 chaos and retired from the race with a deflated tire. Everything was going the way of Cassity, and he maintained that lead for the rest of the 16-lap Final. When he came across the line, that challenging pack was 1.1 seconds away, showing one last time that weekend how dominant Cassity was in the Legends category.

Adding to that success was a podium performance in the Masters division. He qualified seventh overall and won two of the three heat races to start from the pole position for the main event. In the 16-lap Final, Cassity was unable to lead a lap, settling into fourth at the checkered flag to make it a two-podium weekend at the CKNA Grand Nationals 6

Cassity is set for another attack on the Cup Karts North America North Division program during the upcoming season and will continue to keep grinding the laps at the Mid-State Kart Club in Springfield, Illinois. Be sure to see him defend his Legends victory at the CKNA Grand Nationals 7 on September 27-October 1 at the New Castle Motorsports Park. You may also see him behind the wheel of a 2-cycle kart in 2023. 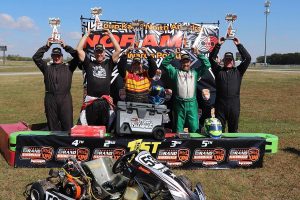 Chassis: Coyote Zenith
Engine/Engine Builder: Kart City Performance, GT Machine
Sponsors: Coyote Motorsports
Series You Compete In: Cup Karts North America, Mid-State Kart Club
Years Karting: 40
How did you get started in karting? My dad used to race karts in the 1960’s.  My brother and I started in 1983 on my dad’s 1966 Dart Kart.  We updated the wheels and tires to the latest and greatest at the time, replaced the McCullough with a 5hp briggs flathead and went racing.
What has been the high point in your racing career? Winning multiple WKA National Championships, including the WKA Gold Cup Triple Crown in 2002 (Briggs Lite, Briggs Medium, Briggs Animal).
What are your goals in racing? At my age, I realize I’m not going to make it into any type of professional motorsports.  I want to continue racing karts for as long as I can!
In a few words, how would you describe your driving style? I’d say my driving style is clean and calculated.  I don’t like to drive overly aggressively and make enemies on the track.  I feel you get what you give so to speak – If I race cleanly, others tend to race me clean in return.
Funniest moment at the race track?  Hmmm…I’ve got lots of great stories, however, I’ll keep it clean.  While racing the Quincy Park Street Race in the late 90’s I was drafting with another driver, we’d just gone over the jump (for those who’ve been there) and were going around the brick wall turn.  About halfway around the turn the front of my kart picked up, moved several inches to the right and then I felt/saw something on the left front tire for a brief second.  After a couple revolutions, whatever was on the tire disappeared.  I thought maybe I’d run over a stick or branch that had fallen from one of the trees above but wasn’t exactly sure what it was.  I did a quick check to ensure everything was OK with kart and went back to racing.  While standing in the scale line after the race, the corner workers brought me a paper grocery sack containing a “gift”.  Apparently, a squirrel had gotten onto the racing surface and was up against the brick wall just about the time I was coming through the turn.  Unfortunately, the squirrel didn’t make it, but did provide for some good laughs afterward.

What do you do when not at the track?  I like to cook/BBQ, garden, shoot competitively, and fish
What are your goals outside of karting?  Be successful with my family and professional career
What type of street car do you drive?  2018 GMC Sierra Crew Cab
What type of street car would you like to drive?  Ferrari
What are your pet peeves or things that irritate you?  People that ask for advice, then disagree/argue with the advice you provided
What do you think could be done to improve the sport of karting?  Hmm… that’s a tough question.  I could discuss multiple issues (with varying degrees of agreement/debate) but feel that controlling costs is important moving forward.  With the current state of the economy, keeping racing affordable is paramount to sustain entries and support growth.
What are your favorite aspects about the sport of karting?  My favorite aspects are the sense of family and camaraderie at the track.  More times than not, you’ll see a driver’s entire family, and many times the extended family, at the track – whether it be at a local or national event.  I’ve met people from all over the US/Canada and maintain many of those friendships today – some of my best friends are people I’ve met through karting.