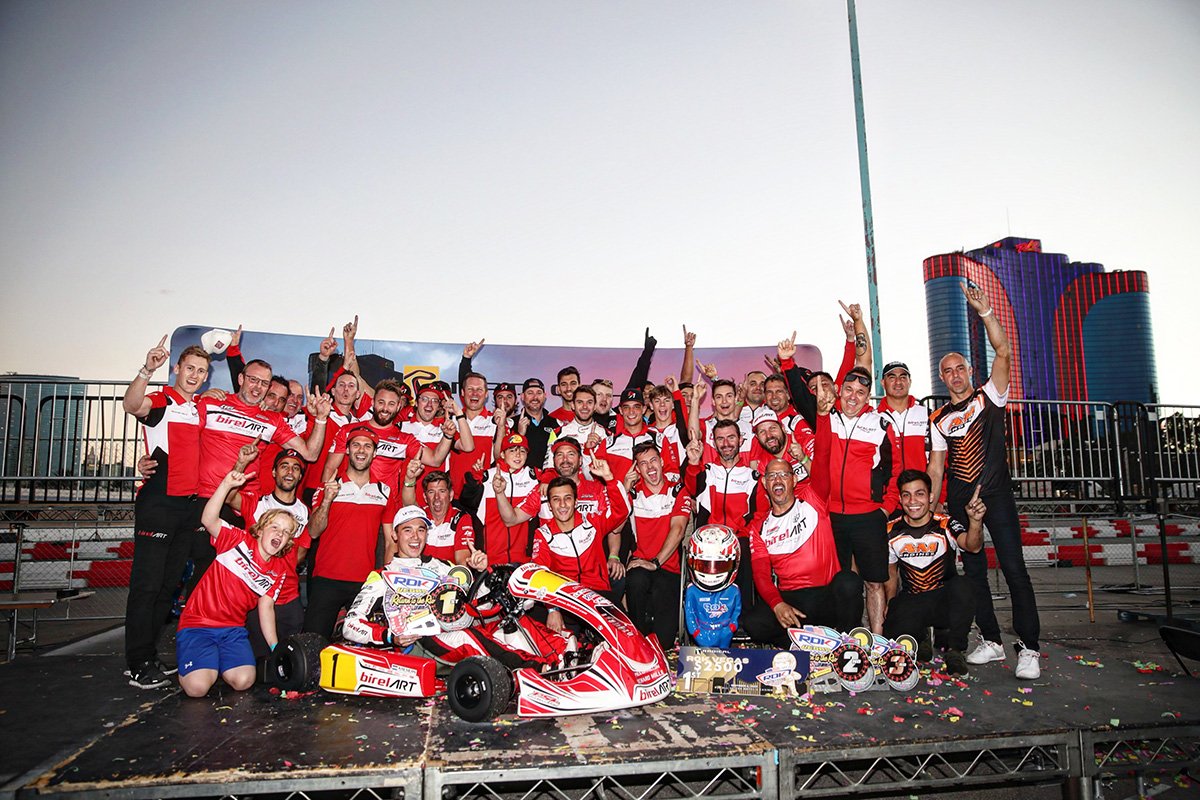 November marked another trip to Las Vegas for the kick-off of some of the biggest karting events across the globe. First up for the BirelART North America squad was the Return to the RIO for the 2022 ROK Cup USA ROK Vegas Presented by Radical Cup event on the newly designed temporary circuit. Taking place in the parking lot behind the RIO All-Suites Hotel & Casino, the BirelART contingent earned two main event victories and five podiums to go along with a trio of heat races.

Leading the way for the team was perennial front-runner Marijn Kremers as he was able to stand on the podium on two different occasions. After qualifying fourth in ROK Senior and eighth in ROK Shifter, Kremers methodically worked his way through the heat races to find himself closer to the front for the start of the main event. When it counted, Kremers delivered as he made a late race pass in the ROK Shifter main event to steal the race win and stand atop the podium and in ROK Senior, earned another solid result for the team with a second-place result.

BirelART North America’s other ROK Vegas title came from the ROK Shifter Master class as Antonio Pizzonia Jr. put a pair of BirelART drivers on the podium. Always near the front of the field throughout the weekend and similar to Kremers on Championship Sunday, Pizzonia rose to the challenge to stand atop the podium in ROK Shifter Master to provide BirelART North America with a sweep of the gearbox classes.

Kremers and Pizzonia were not the only drivers to deliver top-three performances on Sunday as Diego Ramos joined Marijn Kremers on the podium in ROK Senior with a valiant effort to finish in the third position. Canadian driver Patrick Woods-Toth earned a seventh-place finish in ROK Senior.

Perennial front-runner Jordon Musser was a fixture at the front of the ROK Shifter Master field and while Pizzonia took the win, Musser added another ROK Vegas podium to his resume with a third-place finish. In the ROK Shifter class, four BirelART North America drivers finished in the top-six led by Kremers with the win. Hunter Pickett, Jake French, and Davide Greco finished fourth through sixth respectively as the BirelART product line dominated the premier ROK Cup USA class.

Additional top-ten finishes on Championship Sunday came from Frankie Esposito in the ROK Junior class to finish eighth as well as from Mini ROKKERs Alexis Baillargeon and Antoine Lemieux who came home seventh and tenth. Both Baillargeon and Lemieux started deep in the field in 18th and 20th and made their way forward. Showing top-five pace throughout the event, their main event results were respective of the hard work that they put in.

“Our ROK Cup USA season is now over, and we thank all of our drivers, competitors, mechanics, crew, dealers, and more,” explained Kevin King. “Next up is another trip back to Las Vegas for the annual Superkarts! USA SuperNationals this week.”

For more information to become part of the BirelART, Ricciardo, Charles Leclerc or TM Racing dealer networks or information on how to join the PSL Karting / BirelART North America Race Team for the 2022 season, please contact Kevin@PSLKarting.com.