Purse of $25,000 on the line for headline shifterkart category at silver anniversary event 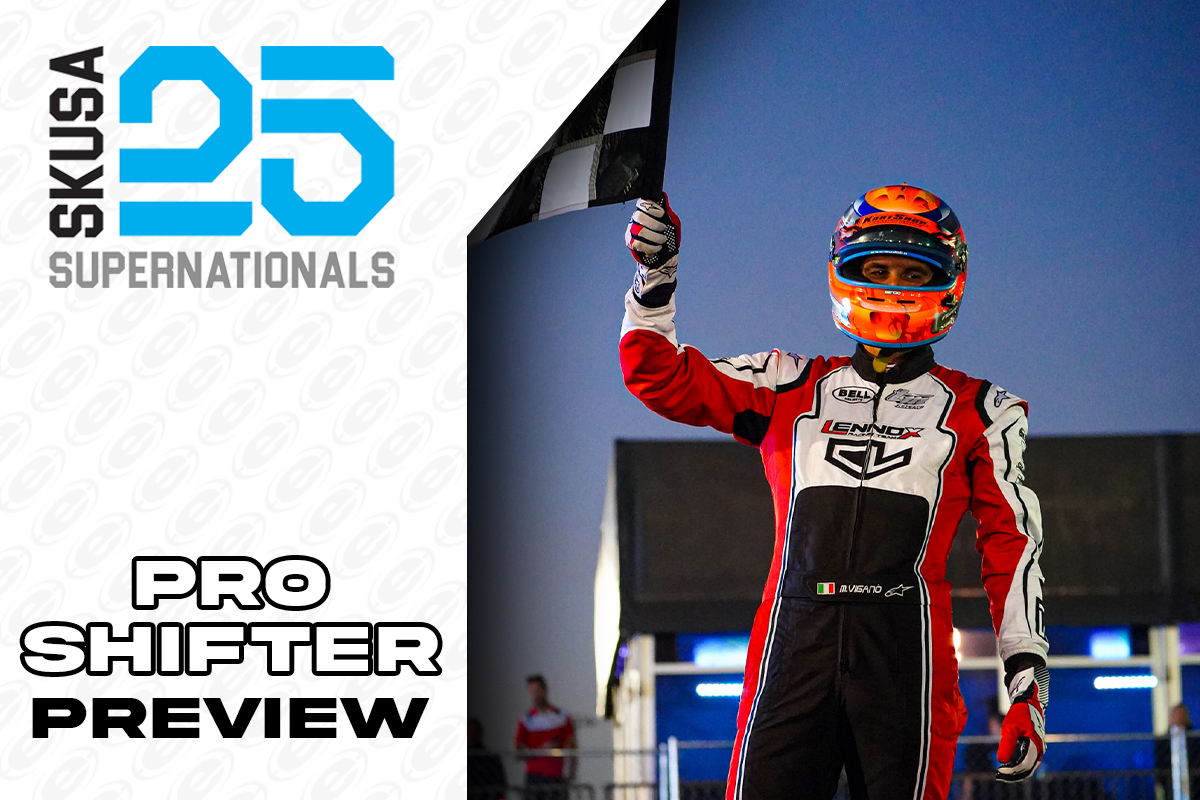 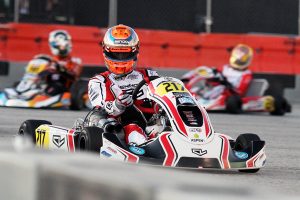 Matteo Vigano will attempt to become only the second driver to repeat in the KZ category at the SuperNationals (Photo: EKN)

Shifterkart racing was the basis of the Superkarts! USA organization when it began in the 1990s. The thrill and speed of six-gear machines an inch off the ground drew the attention gearheads across the country. The growth eventually led to a gathering in Las Vegas that would become the SKUSA SuperNationals.

From the opening event in 1997, history was made with three classes competing, all around the gearbox engine platform. The legendary status was established with Alex Barron the first name etched in history. Darren Elliott, Memo Gidley and Scott Speed joined as the four founding winners of the SuperNationals in the headline division of S1. The shifterkart craze expanded, bringing on the need for a SuperPro category to take the spotlight. Ron White, Wesley Boswell, Jason Bowles, Lorenzo Mandarino and Gary Carlton became the next names on the list as the top North American shifterkart drivers of their time. It was in 2007 with the welcoming of the factory drivers from Europe that opened the SuperNationals to the international stage. Marco Ardigo, Jonathan Thonon, Bas Lammers and Anthony Abbasse were the new stars of the show.

It would be Ardigo that set the record with three wins in the category during his tenure, only to be matched later by Paolo de Conto with three triumphs in four years. The one to stop him from getting four…GFC – Gary Carlton. Italian Leonardo Lorandi took honors in 2018 before Danny Formal stole the show in 2019. 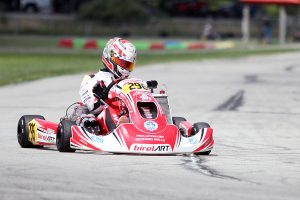 Following the postponement of the SuperNationals in 2020, the event moved to the Las Vegas Motor Speedway in December 2021 where Matteo Vigano became the fifth different Italian driver to win the headline shifterkart category at the SuperNationals. Vigano (PSL / Birel ART) comes into the Pro Shifter category as the defending winner and runner-up in the 2022 FIA Karting European Championship. Last year was a 1-2 finish for PSL / Birel ART with 2019 FIA Karting World KZ Champion Marijn Kremers placing second. It was the third straight SuperNationals that Kremers found himself looking up at the winner from the second step of the podium. The Dutch was able to secure the SKUSA Pro Tour championship in 2022 with three victories in six races, competing for much of the season here in the USA.

The entire podium from last year is returning with Danny Formal, Riccardo Longhi and AJ Myers all in the field. Formal (RPG / Kosmic) was the defending winner last year, placing third in 2021. His three wins at the SuperNationals puts him on a list of 11 drivers to win as many times over the last 24 SuperNationals events. Longhi (PSL / Birel ART) finished fourth in his first SuperNationals after earning the FIA European Championship last year. Myers (Magik Kart USA) completed the podium, bouncing back from a DNF in the opening heat after setting fast time in qualifying to finish fifth on SuperSunday as the sun set over Vegas. He has four podium finishes in the last seven SuperNationals while placing second to Kremers in the SKUSA Pro Tour championship. 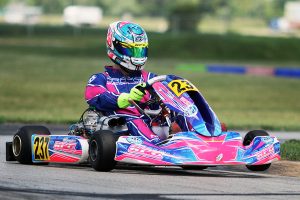 Third in the SKUSA Pro Tour championship for 2022 was former champion Jake French (PSL / Birel ART). French kept a consistent pace throughout the season, landing in the top-five in the final five races. The Texan came one spot away from the podium last year after finishing as Pro Shifter runner-up in 2019. This will be his 11th start at the SuperNationals, and for now, his final one as he announced his retirement from the seat following this year’s event.

In total, there are six former SuperNationals winners in the field. The two eldest winners are Matt Jaskol and Ron White. Jaskol (CRG Nordam) was a winner in the K2 category back in 1998. This will be his 17th start at the SuperNationals, with a best finish over his last three starts of sixth in Pro Shifter back in 2019. Twenty years ago, White (RWR / CRG) stamped his name into SuperNationals history with a win at the Rio debut in 2002. White is set for his 19th start at the SuperNats, looking for redemption after placing 23rd last year.

Another driver looking to make history at SuperNationals 25 is Billy Musgrave. This year marks his 10th start, coming in tied for the most victories at the SuperNationals with four. His debut victory in S2 at the 2012 event put his name on the map. Three straight victories from 2017-2019 further solidified his name in the record books, matching the total set by Connor De Phillippi and now Kip Foster as the only three drivers to win four times at the SuperNationals. Musgrave (Factory Karts) will have two chances this year, also competing in the KA100 Master class. He is coming off his only DNF at the SuperNationals, recorded last year on SuperSunday. 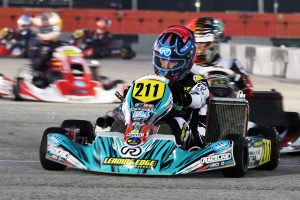 Two-time SuperNationals winner Brent Crews is back for his second start in Pro Shifter (Photo: EKN)

One of the youngest drivers in the field is among the favorites following his performance a year ago. Brent Crews continues to turn heads and the motorsports world is watching. The former Rotax Grand Finals winner, two-time IAME International Final winner and two-time SuperNationals victor will be making his second start in Pro Shifter. Crews (LEM / Formula K) was among the top contenders last year, ending up eighth on SuperSunday. Now a Trans Am Series race winner and Rookie of the Year title under his belt, the 14-year-old looks to back up his wins in KA100 Junior in 2019 and Mini in 2018.

The oldest in the field finished one spot ahead of Crews last year. Four-time FIA World Karting Champion Davide Fore (Italkart) will make his seventh start at the SuperNationals. His best finish was runner-up in S1 at the 2014 edition at the Rio. He’s stood on the podium five times in those seven starts. Hunter Pickett is the final driver returning that finished in the top-10. Pickett (PSL / Birel ART) is coming off a top-10 at the ROK Cup Superfinal event after earning another Challenge of the Americas championship earlier this year.

Some of the notable names in the field include former NTT IndyCar Series and 2022 Formula E driver Oliver Askew. The Florida driver is set for his fourth start at the SuperNationals, making his last appearance in 2015 in TaG Senior. He drove to sixth in S1 the year before. Askew is back with GFC, the brand he won ROK Vegas in 2020 with and drove to third at the 2022 edition last weekend. Joining him under the GFC tent are drivers Jacob Gulick and Kyle Wick. Gulick is finishing up his sophomore season in the shifterkart ranks, set for redemption after a DNF in his SuperNationals debut. Wick (Trackmagic) is a former Pro Tour and COTA champion, looking to improve on his 14th a year ago. 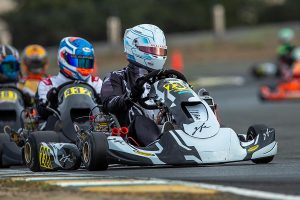 A total of three female drivers will be in the Pro Shifter field at SKUSA SuperNationals 25. 2021 SKUSA Pro Tour X30 Senior champion Hannah Greenemeier (RPG / LN Racing Kart) will make her debut in the Pro Shifter category at the SuperNationals after placing top-6 multiple times over 2022 at the Pro Tour. Also making her debut in the category at the SuperNationals is Macy Williams (CB / Kosmic). The Colorado driver is one of nine drivers selected for the 2022 Spec MX-5 Shootout, which was postponed this week due to Hurricane Nicole. The third is Annie Rhule (Magik Kart USA). Rhule – a 2022 Heart of Racing Team Female Racer Shootout finalist – is hoping to improve on her DNF a year ago.

6 – Former SuperNationals winners in the field

37 – Drivers from outside of the USA