In October, EKN announced the change of owners for the Route 66 Sprint Series, a regional racing series that is positioned in the Midwest with races scheduled in Wisconsin and Indiana for 2023. USPKS owner Mark Coats has sold the program to long-time racing father Chris Kardashian, who has very specific plans for growing the historic series. EKN sat down with Kardashian to discuss his ideas in what we’ve developed into a two-part interview. It’s an enlightening discussion that delves deep into the ideology that will serve as the program’s guiding principles for 2023 and beyond.

eKartingNews: First off, thank you such much for taking the time to talk with us about your acquisition of the Route 66 Sprint Series. Can you get started by giving us your background in the sport to provide some insight for EKN Nation?

Chris Kardashian: Thank you, guys. I appreciate the opportunity. We started in karting at Stockholm Karting Center in 2006 with my son (Alexander), who was six at the time. He came up through the Cadet ranks, racing two-cycle. When we got into the sport, I bought Alexander a Cadet kart with a 60cc Gazelle engine and also bought myself a kart with a 125cc Leopard. I’d raced cars in the early 90’s, so I understood racing and lines, but never had been introduced to karting, so it was all a huge learning experience and, candidly, still is today.

EKN: So, you were both racing at the start. Did you stick with club racing or did you branch out?

CK: We both raced at SKC (mostly Alexander) and continue to be involved with the track today, but after a number of years, we did branch out, traveling across the country together to run at different tracks. I remember a time running for fun at a track in Grand Junction, Colorado. Alexander was still in his Cadet chassis with the Gazelle engine and I was in a World Formula kart. I came through a double left-hander and hit it as perfect as I thought was possible. At track exit, I looked over my shoulder to see how far back Alexander had fallen and found him glued to my bumper. That was the moment I realized he was fast and I was slow. From that point on, the focus was more on his karting and we have participated in various regional and national level series including Route 66, USPKS, SKUSA, CKNA, FWT, and WKA.

EKN: When did you first learn about the Route 66 program as a karting dad yourself? 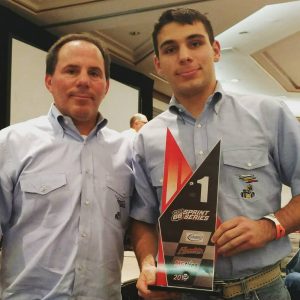 Chris Kardashian and son Alex are racers at the Route 66 program, and beyond, for the last several years

CK: I’m not certain of the exact year, but it was likely around 2016 or maybe 2015. I am certainly not the historian, so don’t know all the history of Midwest racing, but I recall racing in a Midwest Sprint Series event at Stockholm and know that experience launched our interest in regional racing and, ultimately, the Route 66 Sprint Series.

EKN: Making the leap from a karting dad to a series owner is not something we see a great deal. When and where did the idea of purchasing the series come about and what was the motivation?

CK: Wow, that is a loaded question. The truth is I love the sport of karting and I’m always looking for ways to give back to the sport. The obvious reasons for the love of karting have to do with competition, the thrill of racing wheel-to-wheel at intense speeds and the camaraderie of the sport, but there is an underlying love for the sport. It is about family values and raising a family in an environment where life lessons can be taught. For a number of years, I looked at the idea of purchasing a track somewhere in the Midwest. For various reasons, those stars never aligned and certainly, I was not ready to leave Minnesota.

Maybe three years ago or so, I started casually telling Mark Coats that he needed to sell his series to me. We did not have serious discussions then, but I was constantly reminding him of my interest. With each year that passed, I got a little more aggressive in sharing my desire to Mark that I was interested. Last year, as the USPKS hit record numbers under Mark’s leadership, I think he began to see the synergies of me running with the Route 66 program while he focused on USPKS. Obviously, with the passing of my wife, those conversations were put on hold until recently.

EKN: When and where did the final handshake and agreement take place?

CK: If there ever was an atypical transaction and agreement, I imagine this one was it. I knew where Mark wanted to be for some time, so the terms were not a huge obstacle to consummating the deal.  Candidly, until Mark was absolutely sure he was ready to relinquish “his baby” and until I was able to put forth the emotional commitment into the series with everything I had going on, there was no need for us to engage in any prolonged negotiations. Anyone who may have known that Mark and I were in general or high-level conversations was probably wondering what the hell was taking so long to close the deal.

Speaking candidly, there was no sense for me to be pushing Mark into doing something he may not have been ready to do and he knew there was no pushing me into something that I was not ready to do.  I think it was at the last Route race when he came up to me and literally said: “Ok, let’s do it, I am ready”.  And he genuinely and sincerely asked me if I was ready. I know this will be hard to believe, but we shook hands on the deal at that event and the final price was never discussed in that conversation. Trust in business and life is everything. With trust comes mutual respect and with that, negotiations are pretty straight forward. Yes, we had to iron out some details, but the handshake and agreement happened then.

EKN: So with the change of ownership completed, and considering the fact that you’d been working Mark for years trying to get him to sell you the series, we’re sure you have ideas on how you want to evolve the program. Can you detail the people that you plan to set into the key personnel positions for the Route 66 program in 2023?

CK: It’s definitely too early to go into detail, but be assured the fabulous tech team led by Rick Jump and Al Weisensel will be back along with the majority of the other staff. There will also be some new faces. And I am excited about bringing a staff to every event that is aligned with the vision we will be focused on together. Candidly, the assets of any company are the people. Sure, there is value to the physical assets and brand of a company, but arguably, the highest valued assets of any company are the associates. This is where I placed the value of the series, so it is my desire that the majority of the Route 66 staff will return in 2023.

EKN: Are you planning to approach the series in a way that is unique from the past ownership and management? 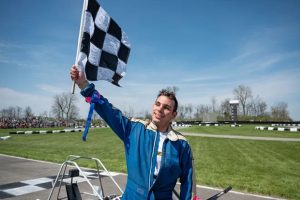 CK: The candid and truthful answer is no. That does not mean there won’t be some changes or more focus on certain aspects of Route 66 regional karting, but I am not interested in making wholesale changes. Mark has built two fabulous series in Route 66 and USPKS. What fool would try to make big changes?  I think if my plan for Route was to take it in a different direction, Mark would not have sold it to me either. He is my trusted advisor. We talk almost daily and often, multiple times a day. I will tell you I think the reason we talk so many times a day is because he is always getting pulled in multiple directions with his other businesses and he constantly has to call me back (laughing).

Here is what I will say about why I wanted to buy Route 66: There is a need for a strong regional karting series in all geographies across the USA. That message will not change. In the Midwest, I want the Route 66 Sprint Series to be that series. My goal is to grow the series, but the fine print is this: I am interested in organic growth. In other words, growing participation in the series from Midwest racers by attracting new racers from the various clubs to join us. I am not interested in growing the series to become a national series covering multiple geographies. All that does is create a shift in business – racers switching from one series to another. That is not growth.

There are already enough National or Super Regionals out there today. I will be focused on finding the balance of maintaining the existing top level driver talent that Route 66 has today, while concurrently being focused on bringing new faces to Route 66 from the various Midwest clubs.

What’s missing today in karting are more regional series that afford the club racer a stepping stone to national events. I have lost count of the number of club racers who have tried to progress from their local club to a national series and end up losing confidence in their own talent or get disenfranchised with the sport altogether. Alexander was extremely successful in club racing at our local club. I think he won 13 championships in 11 consecutive years, but when we hit the road, it was brutal. Winning did not come so easy. As a racer and a father of a racer, I can draw on many of my own experiences to help guide me into the future. Route 66 should be the stepping stone or a part of the ladder system to future racing.

EKN: We’ve been preaching that concept for years, that regional series need to run the classes that are prevalent in their region’s clubs and draw the top drivers from the clubs to go head-to-head with each other. It’s exciting to hear you state that concept. Are there any specific things that you are looking to implement for the 2023 season to achieve this approach?

This one is easy. Every time someone wants to talk about my vision for the future of Route 66, my answer will be the same. My Guiding Principles on everything we do will be focused on four ‘pillars’ which will serve as the foundation for our success:

EKN: Chris, this is a tremendous list in terms of providing a program for club racers who are looking to expand their racing into a more competitive regional series. Let’s pause here and come back tomorrow and delve deeper into your ‘four pillars’.0

We’ll publish the second half of our interview with Chris on the website tomorrow.