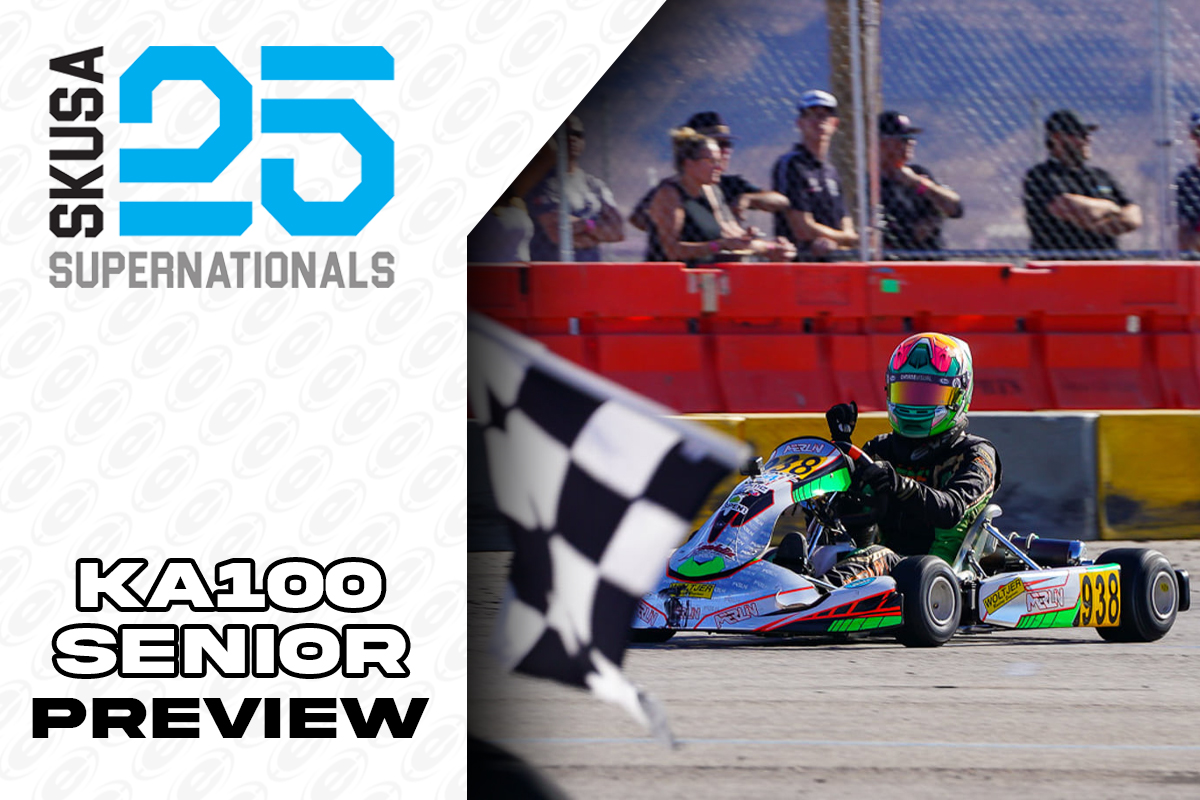 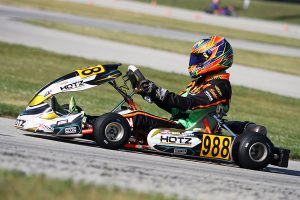 Nick Terlecki is the only podium finisher from last year’s SuperNationals returning for SuperNats 25 (Photo: EKN)

The KA100 Senior division – featuring 74 entries – is set for its fourth edition at the SKUSA SuperNationals, and it will also welcome a fourth different winner. None of the three former victors will be competing at SuperNationals 25, including defending winner Brandon Lemke. Inaugural winner Steven Barros was ‘one-and-done’, Pauly Massimino is competing in X30 Senior only, and Lemke has elected not to defend his victory from 2021.

In fact, the top-10 will look a lot different this year with only three drivers returning from last year’s finishing order. The lone podium finisher coming back is Nicholas Terlecki (Franklin / Exprit), who placed third in his Senior debut at the SuperNationals. Double SummerNationals winner Oliver Calvo (SCR / Redspeed) finished eighth in his second year in the category a year ago. Those wins put Calvo fifth in the SKUSA Pro Tour championship chase. Caleb Shrader (RPG / Kosmic) finished ninth at SuperNationals 24 in his Senior debut and has been among the top 100cc drivers all season long in 2022 finishing fourth in the SKUSA Pro Tour standings. 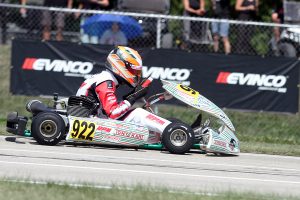 Two drivers have really stood out among the others in 100cc competition. Jeremy Fletcher ended his Junior career with a double-win SuperNationals last year, taking the victory in both KA100 and X30. Fletcher (RPM / Tony Kart) went on to claim three wins at the SKUSA Pro Tour to score the championship in his rookie season, while also placing third in USPKS standings with one win. Alex Stanfield was the driver to claim the title along the eastern half of the country, winning twice in the eight rounds while finishing second to Fletcher in the SKUSA standings. Stanfield (GWR / Tony Kart) placed 18th in his KA100 Senior debut at last year’s SuperNationals.

Fletcher leads a solid rookie crop of drivers that will be making their first start at the SuperNationals. Four drivers finished top-10 in KA100 Junior a year ago, including Chase Hand (RPG / Kosmic), Elliot Cox (MPG / Kart Republic), Parker DeLong (RPM / Tony Kart) and Aden Rudolph (PSL / Birel ART). Ayden Ingratta (SCR / CRG) is making his move up to the Senior ranks for SuperNationals 25, after placing fifth in X30 Junior a year ago. Christian Miles (MDR / LN Racing Kart) – who was top-10 in X30 Junior last year – made the jump up to Senior at the USPKS finale to KA100 Senior. Miles, who was named the Trackhouse Karting Career Advancement Award during the IAME USA Grand National Championship, won in his Senior debut at New Castle, adding a third-place result the following day. 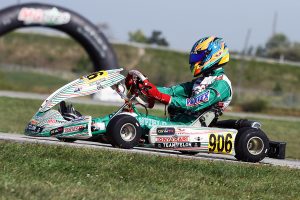 Alex Stanfield comes in to the SuperNationals as the USPKS champion in KA100 Senior (Photo: EKN)

The list of possible podium contenders is long. We begin with some of the former winners in the field. While Brent Crews and Connor Zilisch have not been in the kart much for 2022, they are both possible favorites in the field. Crews (SCR / CRG) is a two-time SuperNationals winner with victory in Mini (2018) and KA100 Junior (2019). A DNF last year in KA100 Senior was followed up by a top-10 in Pro Shifter. He is coming off a Rookie of the Year campaign in the Trans Am Series. Zilisch (LateApex / Tony Kart) is also making his second start in KA100 Senior, coming just corners away from a possible victory last year while nearly landing on the podium in X30 Senior. It would have added to his Mini Swift win in 2017. Zilisch competed in both the MX-5 Cup series and Trans Am Series in 2022.

Chase Jones (MPG / Kart Republic) is fresh off victory at the ROK Vegas event in 100cc competition and is set to make his second start at the SuperNationals in KA100 Senior. Frankie Mossman (Benik / CRG) earned the championship at the California ProKart Challenge program in 2022. Top driver from the Route 66 Sprint Series is Austin Jurs (Franklin / Redspeed), who finished second behind Lemke in the series standings for 2022 and will make his SuperNats debut as a Senior driver. The Texas Sprint Racing Series featured record numbers all season with Stanfield earning the championship. Behind him was Peyton Phillips (Supertune / Tony Kart). Don’t count out Blake Nash (Nash / EOS), or Cedrik Lupien (RPG / Kosmic), who ended up third in the SKUSA Pro Tour standings, Aiden Levy (Alonso Kart), Rotax US Trophy Final winner Oliver Hodgson (CompKart), the Bayliff brothers of Gavin and Finnegan at Trinity Karting Group on the Kart Republic, along with Jake French (PSL / Birel ART). The former SKUSA Pro Tour champion is pulling double duty, making his first start in KA100 Senior along with vying for that elusive victory in the Pro Shifter division. Hours prior to posting this preview, French announced this will be his final event, and taking a step back from the driver’s seat following the SuperNationals. It will be a final chapter in an amazing career that span’s roughly two decades.

4 – Former SuperNationals winner in the field

12 – Drivers from outside of the USA