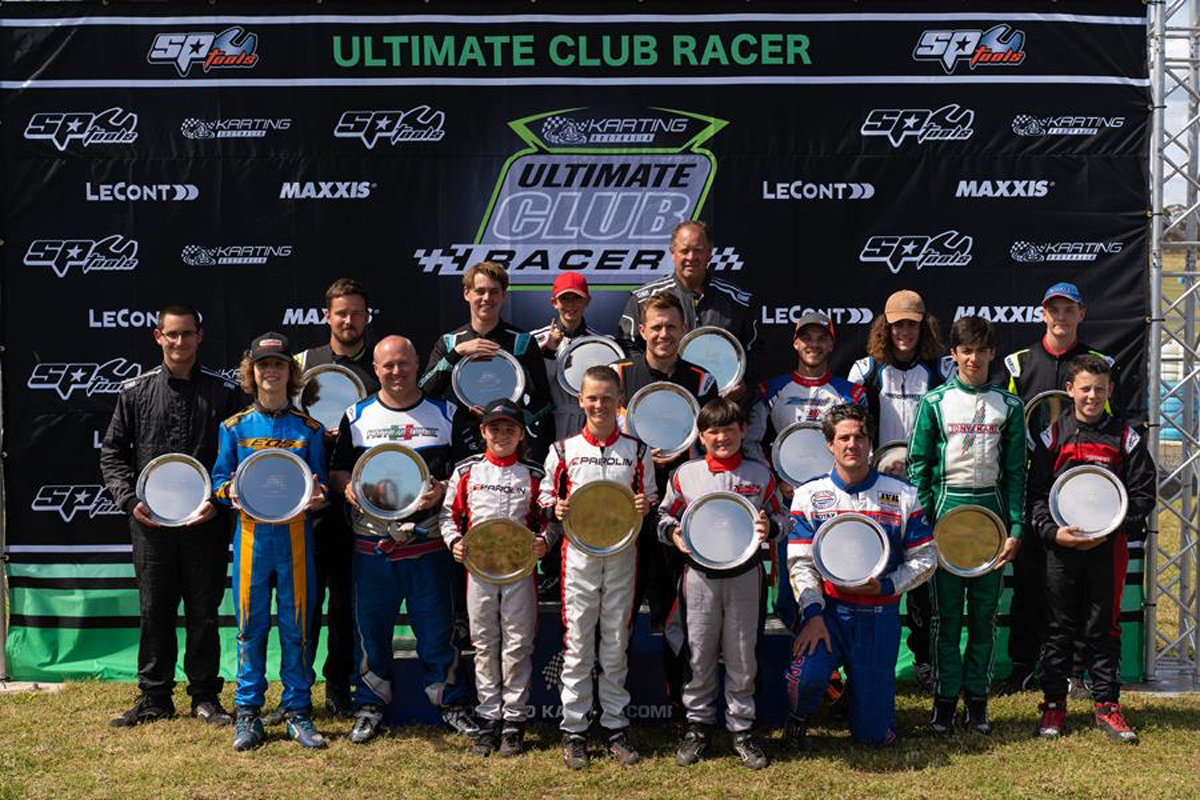 The Ultimate Club Racers were crowned for 2022 at Murray Bridge on Sunday (Photo: MacPherson Media)

Plenty of high drama surrounded the final day of competition as the Ultimate Club Racers were crowned.

South Australian local, Leigh Harrison was the taste of the town, becoming the Ultimate Club Racer Champion in two categories.

The driver, who is now an international motorsport executive, took out both the KA3 Senior Medium plate – his first time in the class – and the 4SS Medium Title.

In KA3, he beat home West Aussie, James Micucci-Allen and Matthew Nietz, while in 4SS, he was joined on the podium by Queenslander Darcy Briggs and fellow South Aussie, Samuel Miettunen.

In the other major 4SS categories, it was a South Australian family affair. Young Wesley Bowden held on for a close victory in 4SS Light over Blake Turner and Jackson King.

In 4SS Heavy, it was his father Daniel Bowden that got the win. He led home Andrew Hall, who has just got into the sport and Stephen Miller on just his third event on his return to the sport.

Victorian, Corey Herbertson won KA3 Senior Light after a contest that lasted all race. He got shuffled back in the order off the start and had to push through to get to the front. He ended up winning by 2.8 seconds over Joshua Elliston and Benjamin Munro – who has just made the switch from being at the top of national level Junior competition.

KA3 Junior was a highlight of the weekend and it was Joseph Belardo who walked away as the Ultimate Club Racer this year, the New South Welshman winning over Queenslander, Dominic Penman who had been at the front all weekend and Hunter Salvatore from Victoria.

One of the more bizarre results came after KA4 Junior Light. Joe Imbrogno crossed the line first and his brother, Salvatore salvaged third after a mid-race collision, however both were excluded from the results due to a tyre mistake. This promoted Noah Enright to third position – despite a 10 second penalty from being involved in the Imbrogno incident.

Promoted to the race win was Lucas Rickard and second was awarded to Darwin driver, Dylan Ralph.

Cadet 12 fell the way of Victorian Jackson Brasher.  The race, which finished the day’s racing was a classic with any one of five drivers in with a shot of taking the win.

NSW’s Liam Carr was second with Riley Grande was elevated to third after Dominic Mercuri was disqualified following a tyre mixup.

Archie Bristow took a narrow victory in Cadet 9, who was pushed the full 15 laps of the final by Oscar Haddon. The margin of victory just 0.5 of a second. Noah Zamprogno – who has just started his karting journey – came a triumphant third on his first interstate race. Meantime, Levi Ross took 4SS Cadet. In the combined race, he was mixing it with a front running group.

Brent Reading won a dramatic TaG 125 Light by 2.4 seconds – opening lap collisions by those behind him aided his performance Cooper Brown finished a hard fought second over Brayden Parkinson – who had plenty of speed throughout the weekend, while Johnny Twigden won the TaG 125 Heavy division.

Mathew Basso won KA4 Junior Heavy over Charlize Brown in a dominant performance and Luca Palombaro was equally dominant in 4SS Junior, coming home first in front of a battle that raged all weekend between Edward McEwan and Lewis Harrison.

The opportunity for club racers from around Australia to come together attracted 150 entries across 19 classes contested in 10 groups with every state of Australia and the Northern Territory represented during the event.

One of the highlights of the event was the State of Origin Race on Saturday afternoon where South Australia claimed the victory before thousands of dollars in prizes were shared between the drivers at the event thanks to SP Tools, LeCont tyres, Maxxis tyres and Vega tyres at the Food Truck Festival on Saturday night.

The Ultimate Club Racer III will return in 2023 with the event moving to Northern Victoria and the Eastern Lions circuit just outside Seymour on the first weekend of November.

Full Results can be found at https://speedhive.mylaps.com/Events/2069917