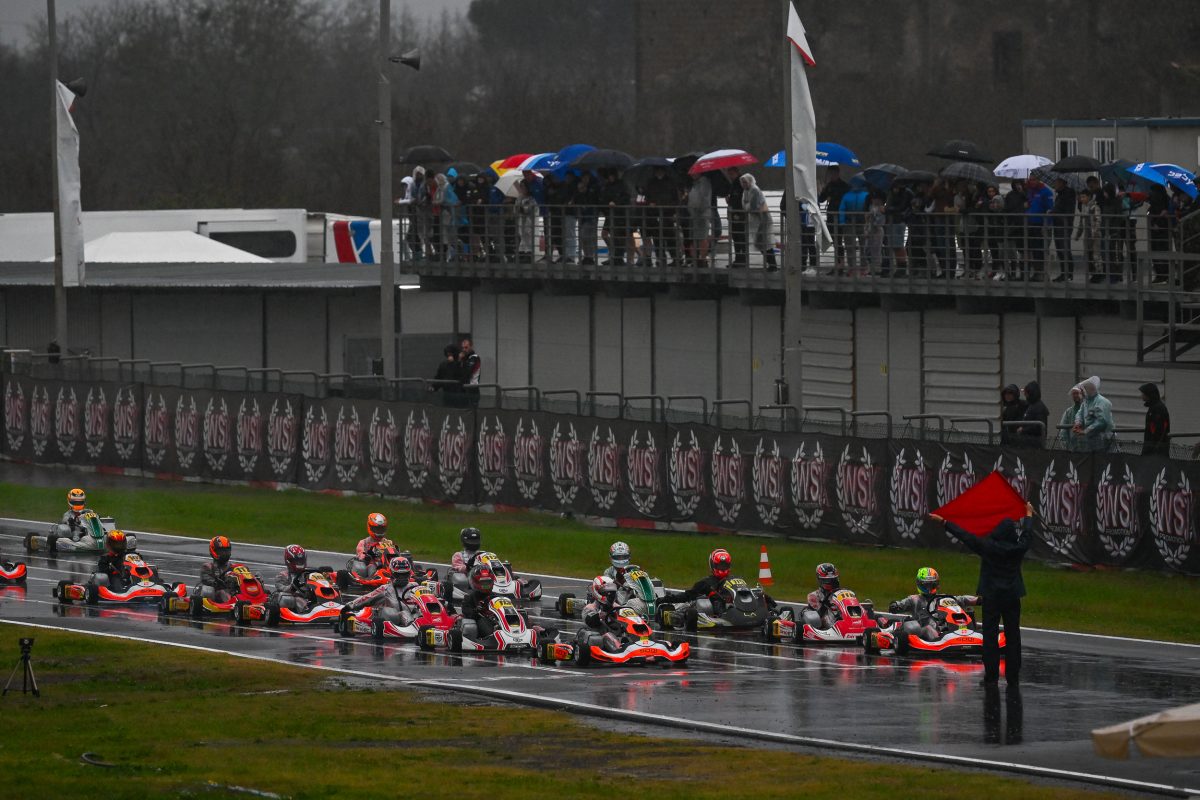 The rain was expected in Sarno and it timely arrived on Friday for the initial heats of the 11th WSK Final Cup’s opener. This is the first of the two rounds that will be closing season 2022. The second round will take place in Lonato next week from November 9 to 13.

After an October characterized by summer temperatures in the whole of Italy, weather turned to more autumn-like conditions. The rain in Sarno started falling shortly after the beginning of qualifying practice and intensified during qualifying heats making it trickier for drivers on the track.

MINI – Zulfikari is the fastest. 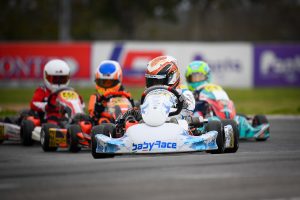 The three sessions of MINI have been run on the dry. The best time was posted by the young Turkish driver Iskender Zulfikari (BabyRace Driver Academy/Parolin-Iame-Vega), who posted a 1:02.500s in the first session and led Vladimir Ivannikov (Gamoto/EKS-TM Racing) by 0.230s. The second session was topped by the Italian Filippo Sala (Team Driver/KR-Iame) in 1:02.674s. He led Mark Pilipenko (Modena Kart/Energy-TM Racing) by 0.163s. The third session saw Panama’s Gianmatteo Rousseau (Alonso Kart by Kidix/Alonso-Iame) being the fastest in 1:03.163s and pipping his teammate from Canada Ilie Crisan Tristan by just 0.095s.

OKJ –  Consani posts the fastest time before the rain. 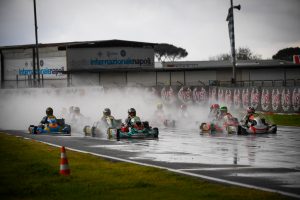 In OK-Junior the rain arrived at the end of the first session. The Australian Andy Consani (Shamick/Parolin-TM Racing-Vega) managed to post the fastest time in 55.774s and was followed by the Italian Emanuele Olivieri (IPK Official Team/IPK-TM Racing), who was only 0.022s shy of the lead while the Scottish driver Zac Drummond (Parolin Motorsport/Parolin-TM Racing) was third at 0.390s. The second session was run under the rain and the Thai Enzo Tarnvanichkul (Tony Kart Racing Team/Tony Kart-Vortex) was the quickest in 1:11.061s, proceeding the Brazilian Miguel Costa (Sauber Academy/KR-Iame) by just 0.004s and the Brit Alfie Slater (Ricky Flynn/LN-Vortex) by 0.346s.

OK – The Asian drivers are the fastest in the rain. The best is the Chinese Cui. 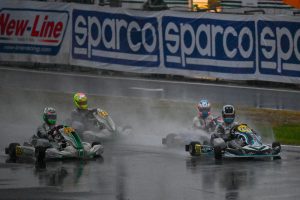 Under the rain, Asian drivers had the upper hand in OK. The best time was posted by the Chinese Yuanpu Cui (KR Motorsport/KR-Iame-LeCont) in 1:11.008s in the second session. He led the Japanese Shimo Zhang (Team Driver/Tony Kart-Iame), was was the fastest of the first session in 1:11.618s, leading the Swede Oscar Pedersen (Waerd Racing/Tony Kart-Vortex) by 0.029s and Luxembourg’s Guillaume Bouzar (Koski Motorsport/Tony Kart-Vortex) by 0.614s. Behind Cui, Anatoly Khavalkin (Parolin Motorsport/Parolin-TM Racing) ended the second session at 0.614s from the top and the Pole Jan Przyrowski (Tony Kart Racing Team/Tony Kart-Vortex) at 0.692s. 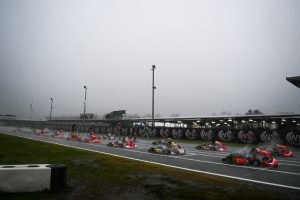 In KZ2 the French Emilien Denner (CPB Sport/Sodikart-TM Racing-Vega) set the pace on the wet in 1:09.997s. He led teammate from Holland Senna Van Walstijn by 0.863s. The other Dutch driver Robin Glerum (Leclerc by Lennox Racing/BirelART-TM Racing) was 1.065s shy of the lead and the Italian was just 0.001s short of him, while the fifth time was posted by the Italian teammate Giuseppe Palomba, who was 1.464s off the pace.

The initial heats started before the heavy rain and the program had to be stopped when KZ2 was about to run its first heat as the track conditions were not safe enough. The first three heats of MINI were regularly run and the victories went to the Turkish driver Iskender Zulfikari (BabyRace Driver Academy/Parolin-Iame-Vega), Vladimir Ivannikov (Gamoto/EKS-TM Racing) and the Pole Bruno Gryc (Parolin Motorsport/Parolin-TM Racing). The first heat of OKJ was won by the Turkish driver Hasan Aksoy Alp (Tony Kart Racing Team/Tony Kart-Vega), while the second went to the Brazilian Miguel Costa (Sauber Academy/KR-Iame).

After the one-hour stop due to the rain, weather conditions improved and KZ2 could run its heat. The victory went to the French Emilien Denner (CPB Sport/Sodikart-TM Racing-Vega).

The racing day ended with the first of the OK heats that was won by the Belgian Ean Eyckmans (EPG Racing Team/Tony Kart-Vortex-LeCont). The races that could not be run today have been postponed to Saturday.

The Live Streaming from Wsk.it and Motorsport.tv.

The program of the weekend in Sarno will continue on Saturday with the remaining qualifying heats. The final stages will be on Sunday, November 6, and will include Prefinals, Finals with Live Streaming from wsk.it and Motorsport.tv.

The program of the WSK Final Cup, Sarno: