Woodbridge Kart Club to Host Race at NCCAR in 2023

Woodbridge Kart Club is pleased to announce the addition of a full day of Friday practice at the May 5-7 AKRA / Hoosier Kartsport Road Race Series Nationals at the North Carolina Center for Automotive Research (NCCAR).

Following WKC’s 2023 schedule announcement in early October, club officials received a number of requests to add a practice day to the new NCCAR event. WKC and NCCAR manager Sam True listened to input from the racers, and negotiated an agreement that will give karters plenty of track time before racing begins Saturday, May 6.

The now three-day event will serve as the 2023 season opener for the AKRA National Road Race Series. It will be the second race of the WKC championship series, which opens April 15-16 at Summit Point’s Shenandoah Circuit. 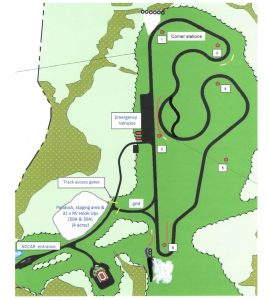 WKC and AKRA will run the 2-mile NCCAR course in the clockwise direction and it will include a new set of esses at the entrance to the long left-hand former turn 5 sweeper (view photos to see the circuit update).

This will be the first time karts will run NCCAR clockwise. At the two road races held at the track in the early 2010s, the circuit was run counter-clockwise due to concerns with the close proximity of the entrance of the turn 5 sweeper and the front straightaway. The addition of the esses solves that problem, and karts will be able to run the course in the traditional direction that most car and motorcycle groups use.

NCCAR is a 620-acre facility located off I-95 just south of the Virginia line. The track is about five miles from the city of Roanoke Rapids, N.C., which includes plenty of hotels, restaurants and shopping.

WKC and NCCAR officials share a great deal of excitement about karting’s return to the track in 2023 after an approximate 10-year hiatus. More information on the WKC-hosted AKRA / NCCAR Road Race Nationals will be posted in the coming weeks and months.

For more information on NCCAR, visit the track’s official website at nccar.us.