The inaugural Rotax Max Challenge US Trophy Final will take to the track at New Castle Motorsports Park in New Castle, Indiana this weekend at an event that will see 12 tickets handed out for the Rotax Grand Finals at the Algarve International Circuit in Portugal in late November. Official practice will run all day on Friday before qualifying gets underway for the five categories on Saturday morning. The drivers will work through a pair of heat races and a Prefinal to set the grids for the Sunday main events.

The format for the Rotax US Trophy Final is a bit different from normal events. The US Trophy Final will feature five categories; Micro Max, Mini Max, Junior Max, Senior Max and Masters Max. Competitors who took part in the two regional programs – US Trophy Series West and US Trophy Series East – will have their two championships combined into an Aggregate Standings heading into New Castle. Those drivers competing in both the East and West program will earn additional points over the US Trophy Final weekend to add to their total from their respective series. The driver with the highest point total in the combined standings in each of the classes will earn a Rotax Grand Finals ticket. 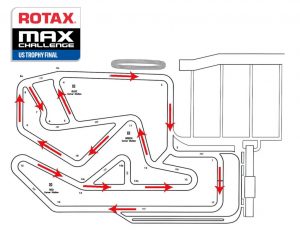 In addition to the 5 tickets up for grabs to those involved in the US Trophy Series East and West programs, the US Trophy Final is offering Rotax Grand Finals tickets to ANY driver based on the results of the main events at New Castle Motorsports Park. These tickets are open to drivers from any nationality or previous Rotax competition. This allows competitors from Canada, Mexico, and any other country from around the world to compete at the US Trophy Final in addition to any USA driver who has not participated in a US Trophy Series East or West event. These additional tickets will be awarded based on the following:

With 25 drivers from four different nations across the Americas, Senior Max is the largest class on the weekend. A total of four tickets are up for grabs in the senior category. Aidan Fox (Alonso Kart) leads the way in the aggregate standings as the top driver from the East, 56 points ahead of top West series driver Ethan Ho (Kosmic). Canadian Griffin Dowler (Tony Kart) remains in the hunt, sitting third overall with East series driver Justin White (Gillard) in fourth, back by 140 points. Other names fighting for the open tickets include Jason Lueng (Kosmic), along with fellow Canadians Adam (Kosmic) and Daniel Ali (Kosmic).

The second biggest class of the weekend, Junior Max, looks set to have 16 drivers from three different countries, with the United States at 13 drivers, Canada with two, and Francesco Monarca carrying the flag of Argentina for the weekend. Arizona native Cooper O’Clair (CompKart) leads the total point standings with a 64-point advantage over top East series driver Ben Hernandez (Kosmic). Archer Eversman (CompKart), Alexander Jacoby (CompKart), Giovanni Santora (CompKart) and Nixx Eggleston (Exprit) are all within 160 points heading into the weekend.

Nine drivers are currently registered in the Micro Max category, with the top three in the combined East and West points all attending the US Trophy Final. Top East Series driver Marco Sammut (LN Racing Kart) has a 107-point lead over top West Series driver Ryan Queen (CompKart). Arizona’s Braylon Underwood (CompKart) is under 150 points out of first, still with a chance to earn the overall point award of a Rotax Grand Finals ticket.

In Mini Max, top East Series driver Fion Shi (Gillard) has established a sizable lead in the overall standings over top West Series pilot Gage Korn (Race Factory). The gap is 106 points heading into the weekend. A total of 14 drivers from the United States and Canada are set to contest the Mini Max class, with five Canadian pilots all on Birel ART chassis for the US Trophy Final. 12 drivers will still be fighting for the final ticket, along with Nathan Holy (OTK) and Kyle Drysdale (Nitro Kart) who remain in the overall hunt, along with Tristian Kanjanapitak (Praga) and Matteo Quinto (OTK).

Derek Wang (LN Racing Kart) had a flawless season in the West Series to enter as the top driver in the Masters Max category. John Bonanno (CompKart) comes in as the top challenger fresh off two wins in the East Series, trailing by 44 points. Vincent Carey is a close third with veteran driver Billy Cleavelin (Kosmic) among the four drivers fight for the overall ticket along with the open slot.

Be sure to follow all the EKN Social Media outlets for updates, photos, videos and more from the Rotax US Trophy Final. Listen to the racing action by heading to the EKN Live page or tune in on the EKN Radio Network.