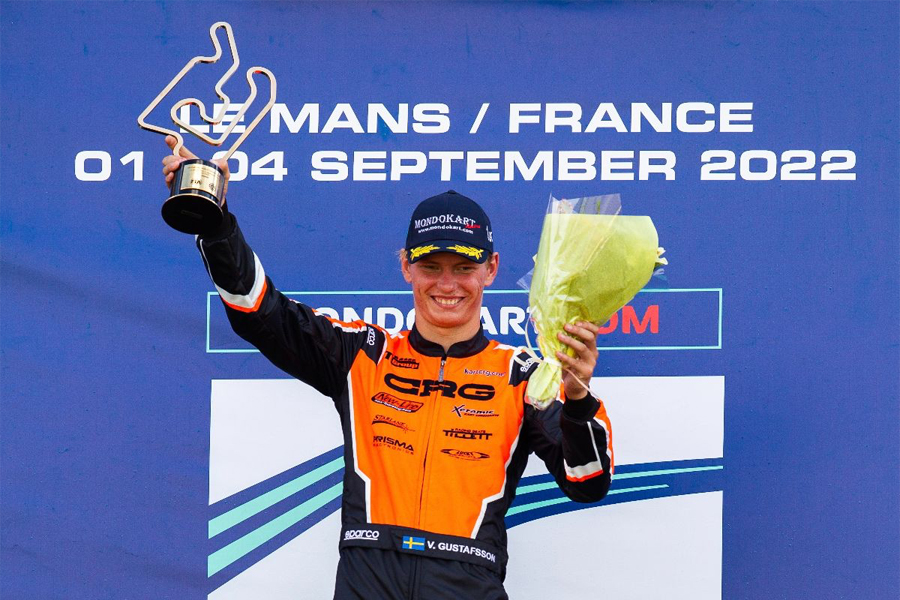 Swedish, 18 years old, Viktor Gustafsson is the new KZ World Champion, the top shifter class of international karting. He started racing in karting at the age of 5 and like many children who dream of becoming the best in this sport, he followed a path of sporting growth that soon took him outside the borders of Sweden, to face international competitions and this year, in his first season as a CRG official driver, on September 4th he has won the most important race of his career up to now at Le Mans: the FIA ​​World Championship KZ.

We have met him at the CRG Factory a few days after this great sporting result and we have asked him some questions to get to know him better and to go back over the fantastic Le Mans weekend with him.

The first question we have asked him is how and when he has started karting:

“I drove my first go-kart at the age of 5 in a parking lot in southern Sweden. My whole family has always been involved and passionate about racing and it was almost natural for me to follow the path of my father and my grandpa. One day I asked if I could try and a few weeks later I drove for the first time. Soon what started as a game became a very competitive sport that I took very seriously, with the aim of being among the best in the world”.

From a sporting point of view, what have been the most significant results of your career?

“Obviously my world title together with CRG is the absolute top. Something that I will never be able to overcome, I think in terms of emotions and importance. It is something that every kart driver dreams of and doing it at the age of 18 was simply incredible. Previously, I won the Bridgestone Super Cup in Mini in 2015, which was my first important affirmation, capable of motivating me to take the next steps in my sporting growth in karting. In 2017 I won the WSK Final Cup in OKJ, after which I had a few seasons difficult sports and I even thought about quitting. The turning point came with the move to KZ in 2020, a category in which I won the FIA ​​European Championship and obtained pole position in the FIA ​​World Cup. During that season my mentality changed and I started making a name for myself in international karting. In 2021 I won the WSK Champions Cup and in the same year I finished 3rd in the Super Master Series. My experience in karting has taught me that whatever you win and no matter how good you are, you always have to keep improving, because otherwise you will be overtaken”.

What can you tell us about your private life, your hobbies besides racing?

“My life has always been oriented towards being the best driver possible. At the moment I still go to school and this takes a lot of time, because I’m studying Economics and Law. If I don’t study I train on the track and if I don’t drive I train from a physical point of view, mainly with the bicycle. My passion for cycling has grown enormously in recent times, thanks to the benefits it gives me in racing. This is and has been my life in the last two years and I am happy about it”.

This year at the World Championship you had 2 chasiss with different technical bases available: the Road Rebel one with 32mm tubes and the KT2 with 30mm tubes. Can you explain the differences between these two models?

“Obviously there is a big difference from a technical point of view, both for the section of the tube and for some geometry of the chassis. It must also be said that the Road Rebel model we have used at the World Championship is an updated version, basically the model that CRG sells for the 2023 season. In any case, the technical differences between the two chassis also generate a big difference in terms of driving sensation. My experience is that the lap time is more or less always the same, so if we think in terms of performance we cannot say that one is better than the other. But on the contrary, as mentioned, the driving feeling transmitted to the driver changes and therefore one chassis rather than the other, can be better adapted to the needs or the style of each driver. As far as I am concerned, I immediately felt very weell with the 30mm KT2: it is very precise and quick when changing direction and has excellent lateral grip. The Road Rebel, on the other hand, was the favorite of my team mate Jeremy Iglesias, who also finished the World Championship on the podium. As for the specific technical characteristics of the Road Rebel we can say that it has more grip in general and great braking efficiency. Many drivers who take part in the National Championships have asked me this question to evaluate a choice between the two models, but the best answer I can give is to do a test with both and understand on a personal level which is the chassis you prefer. I don’t think you can make a choice on “paper”, even if the Road Rebel model is truly versatile and for years the best-selling CRG chassis for the shifter classes and with the latest evolutions it has made an important competitive step”.

This year with your move to CRG you have been involved in both, the OK and the KZ categories. Was it difficult to manage this double commitment in two categories so different from each other from a technical point of view?

“It wasn’t easy at all: it’s more complicated than what you think. Some mechanisms that you may find quickly in a test, don’t come naturally in the race and I had to work hard to find the right feeling and pace in the race in the OK category. Furthermore, in the OK class the kart + driver weight is lower than in KZ and I had to make many sacrifices also to respect this parameter imposed by the regulations, despite having already started a specific preparation in winter combining diet and physical activity. Unfortunately this need quickly turned into an obsession for me, something that I could no longer control and that also brought me not to eat for days. I haven’t talked much about this problem, although I think it’s important to do so, but luckily it is a phase I have overcome now and I am back to 100% of my performance “.

Before saying goodbye, we would like to go back over the Le Mans weekend through what you believe were the key moments in that success…

“It was a weekend that started well, with a good feeling with the chassis and the engine right from the first free practice sessions. We did a good job on the set up and managed the approach to the race well from a psychological point of view. We were not discouraged when we had a bad session and the very changeable weather did not affect us either. From qualifying onwards, we have always been among the fastest and our awareness of being able to do very well has grown steadily over the weekend. As I said, I chose to use the KT2 chassis and everything worked very well, without the need to make big set-up changes, allowing me to concentrate a lot on driving as well. Myself, the technical staff, the team and the engine tuner Gianfranco Galiffa were all like one person only. We all did and thought the same things and this made decisions very easy. We have won together”.