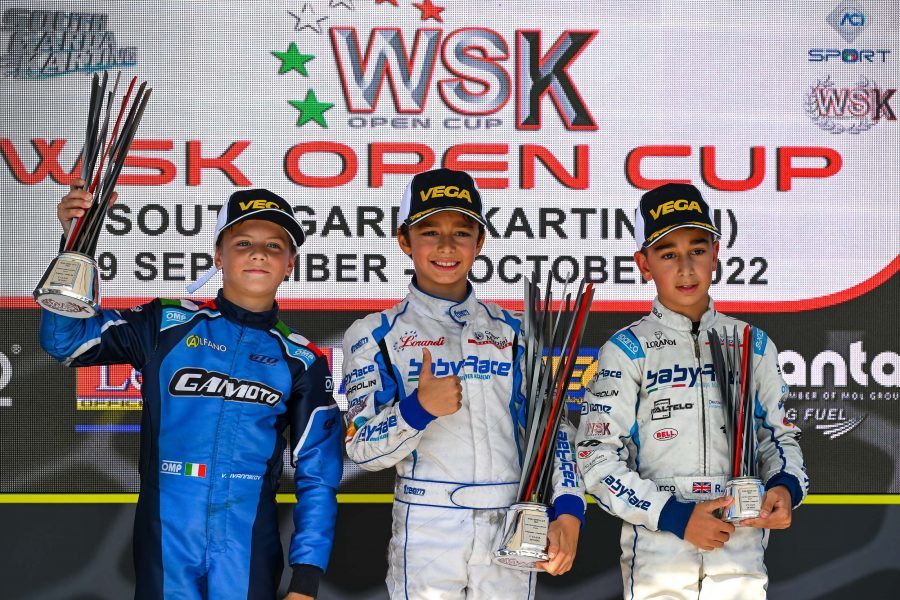 Weather conditions were perfect at the end for the closing stages of the WSK Open Cup, the international event organized by WSK Promotion at the South Garda Karting circuit of Lonato with the presence of the main constructors and teams. A total of 206 drivers from 48 nations were at the start of this fifth edition that had a lot of international drivers among its protagonists, and a lot of young talents that have been fighting for the titles of the 4 categories MINI, OKJ, OK and KZ2.

OKJ. In the two Prefinals of OK-Junior the two drivers on top in the heats kept their momentum. Prefinal-A was dominated by the Colombian driver Salim Hanna Hernandez (Ricky Flynn/LN-Vortex-Vega), while Prefinal-B went to the German Taym Saleh (KR Motorsport/KR-Iame). Among the emerging drivers, the Italian Iacopo Martinese (KR Motorsport/KR-Iame) claimed a great P3 at the debut in Junior.

KZ2. In the Prefinal of KZ2 the Italian Giuseppe Palomba (BirelART Racing/BirelART-TM Racing-Vega) had the upper hand on the French Emilien Denner (CPB Sport/Sodikart-TM Racing), who had led qualifying but ended the Prefinal in third place after the French Jeremy Iglesias (CRG Racing Team/CRG-TM Racing).

In the Prefinal of OK some of the protagonists of qualifying had incidents and the Italian Sebastiano Pavan (Forza Racing/Exprit-TM Racing-LeCont) made the most of the events winning from the Dane David Walther (Koski Motorsport/Tony Kart-Vortex). The two drivers on top in the heats ended fifth, Yuanpu Cui, and ninth, Alex Powell, both on KR-Iame run by KR Motorsport. 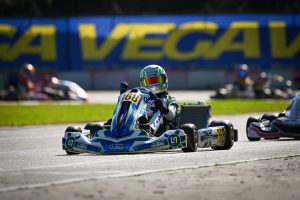 The Final of OKJ is dominated by Hanna Hernandez.

The Final of OK-Junior went to the Colombian Salim Hanna Hernandez (Ricky Flynn/LN-Vortex-Vega), who took an early lead and crossed the finish line on top ahead of the Brazilian Miguel Costa (Sauber Academy/KR-Iame), who installed himself in P2 halfway through the race. The third place was taken by the German Taym Saleh (KR Motorsport/KR-Iame), the fourth by the Pole Maciej Gladysz (Ricky Flynn/LN-Vortex), while the Israeli Guy Elbag (Ward Racing/Tony Kart-Vortex) was fifth and the Chinese Zhenrui Chi (Beyond Racing Team/KR-TM Racing) sixth due to a penalty that was handed to the Swede Elliot Kaczynski (Ward Racing/Tony Kart-Vortex). 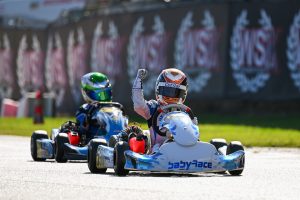 Zulfikari wins the sprint for MINI.

MINI produced a lot of spectacle thanks to the very many young talents that contest this category. Several drivers have been fighting for the victory until the very last meters and the Turkish Iskender Zulfikari (BabyRace/Parolin-Iame-Vega) managed to win the sprint to the line from Vladimir Ivannikov (Gamoto/EKS-TM Racing) and the Brit Roman Kamyab, who is Zulfikari’s teammate. The fourth place, after leading the race early on, went to Filippo Sala (Team Driver/KR-Iame), who has been a strong protagonist of the weekend as the Dutch Dean Hoogendoorn (Alonso Kart by Kidix/Alonso Kart-Iame). The sixth place went to the Romanian Bogdan Cosma Cristofor (BabyRace/Parolin-Iame). 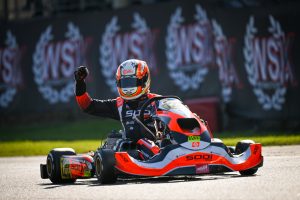 The Final of KZ2 has been very exciting and the Frenchman Emilien Denner (CPB Sport/Sodikart-TM Racing-Vega) took an early lead overtaking the Italian  Giuseppe Palomba (BirelART Racing/BirelART-TM Racing), who had a good start from the pole position. As Denner and Palomba locked out the top 2, the fight for the third place was a challenge between the Romanian Daniel Vasile (DR/DR-Modena Engines) and the French Jeremy Iglesias (CRG Racing Team/CRG-TM Racing). Vasile managed to secure P3 fending off the attacks of Iglesias. The fifth and sixth place went to other two CRG drivers: Viktor Gustavsson and Paavo Tonteri. 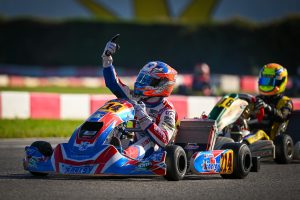 The driver from Latvia, Tomass Stolcermanis (Energy Corse/Energy-TM Racing-LeCont), claimed a strong victory from the second row of the grid. He managed to install himself on top of the race early on and kept this position all the way to the flag. Behind Stolcermanis, the Swede Oscar Pedersen (Ward Racing/Tony Kart-Vortex) and the Brazilian Gabriel Gomez (CRG Racing Team/CRG-Iame) completed the podium in the order. The fourth place was lost by the Italian Sebastiano Pavan (Forza Racing/Exprit-TM Racing) due to a penalty. The Jamaican Alex Powell (KR Motorsport/ KR-Iame) was therefore fourth after a good recovery race, while the American Luis James Egozi (Tony Kart Racing Team/Tony Kart-Vortex) was fifth and the Dane David Walther (Koski Motorsport/Tony Kart-Vortex) slipped down to P6 instead.

Complete results are available at: www.wskarting.it/index.asp