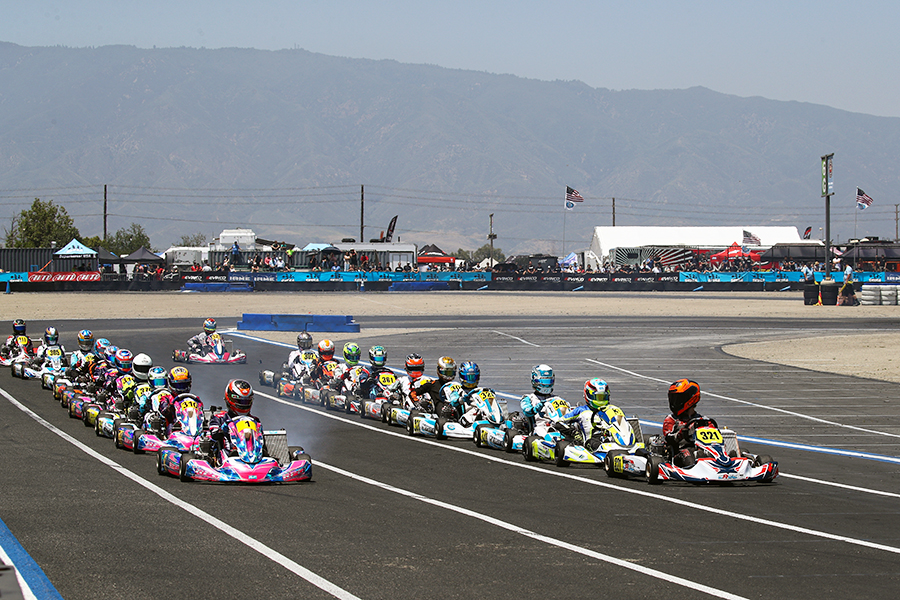 The California ProKart Challenge 2022 series finale this weekend is set to be the final major event in CalSpeed Karting history (Photo: DromoPhotos.com)

History will be made this weekend during the 2022 California ProKart Challenge event at CalSpeed Karting. The event slated for October 1-2 is set to be the last major karting event at the Fontana, California circuit that resides outside the Auto Club Speedway. CalSpeed announced the closure of the facility coming this December, and thus, the California PKC event will be the final Superkarts! USA event in its long history.

On the other side of history will be the championships decided with the sixth and final round of the 2022 California ProKart Challenge. The ‘best five of six’ championship format will take the title chases to the very end, with drivers searching for additional points in the quest for the crown while others fight to remain at the top when the final checkered flag is waved following the main events on Sunday afternoon.

The tightest battle going into the finale weekend is in the KA100 Junior class presented by Nash Motorsportz. Only two points separate Keagan Kaminski and Charlie Smith with the one round remaining. Smith has one victory while Kaminski has gone winless through the first five rounds, earning four top-five results. Round One winner William Rasmussen is close behind in third with Alex Mercado fourth. Round Four winner Kane Martin still has a mathematical chance as well, sitting fifth. Ethan Lampe is the point leader heading into the final round in the HRT Driver Development KA100 Senior class. Lampe has three podium finishes on the season and leads by 60 points over two-time winner Blake Nash – who already has a drop by missing the opening round. Aiden Kempf is third with two-time winner Frankie Mossman in fourth, another driver with a drop already after missing Round Two. All that sets up for what should be an interesting run to the championship.

Three drivers are fighting to the end in the P1 Racing Engines Micro Swift championship. Matthew Cagle has a 35-point advantage over Julian Sanchez heading into CalSpeed. Each has one victory, while Cagle has three runner-up finishes to Sanchez’s two. The only two-time winner on the year – Troy Ferguson – sits third and already has a drop factored in by missing the opening event. Factoring in the drop brings him closer to the top two in the standings with one more round remaining. The chase in the Empire Karts Mini Swift class could also go down to the wire. The lead is held by Johnie Stamps, who has two victories on the season and sits atop the standings by 95 points over Nixon Ellsworth. Close behind is recent winner Turner Brown as Round Two winner Nico Sarphati is fourth with an outside chance.

One title that is provisionally decided is the Factory Karts Pro Shifter championship. Multi-time champion Billy Musgrave has four wins on the season with a third-place result to fill up his five finishes on the year. His advantage over Ansel Baldovin and Luca Bortone gives him the provisional championship. Robert Switzler has had a solid season in the Leading Edge Motorsports X30 Master category, standing on the podium in all five rounds heading into CalSpeed. His lead in the standings is 130 over Scott Nealon, who has yet to pick up a victory in 2022. Ronnie Swaim is at the top of the Mike Manning Karting KA100 Master standings thanks to his recent victory in Santa Maria. He leads over Ron Schoonover with two-time winner Brian Phillipsen in third.

The track configuration for Round Six of the 2022 California ProKart Challenge will be the ‘Classico’ layout in the counter-clockwise direction. Race Pre-Entry is available through the online registration and remains open until the deadline of Tuesday, September 27 at 11:59pm PDT. As always, a 2022 SKUSA membership is mandatory to register and compete. Complete race and venue information, along with a weekend schedule, can be found at the PKC Event Page. Pit Spots and Overnight Camping reservations can be submitted by going to the CPKC CalSpeed Pit Spot webpage.

Superkarts! USA would like to remind competitors of the California ProKart Challenge to save the date for the season-ending championship awards banquet. The event will be held on Saturday, October 29 with more details to be published at a later time. All series competitors and supporters are invited.