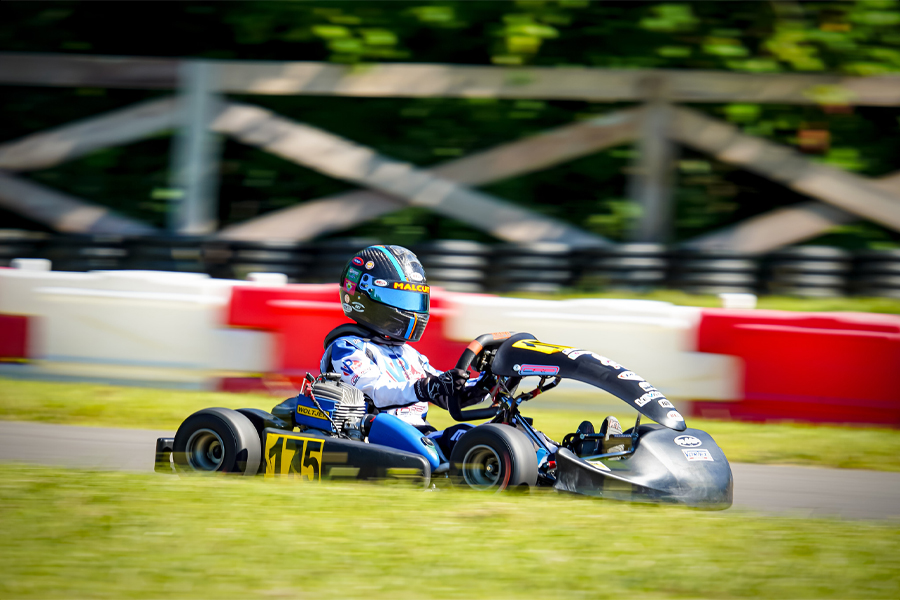 Isaac Malcuit is one of the brightest up-and-coming stars in the American karting scene in the past year. Malcuit started off his 2022 campaign by winning the championship in Mini Swift for the 2022 Florida Winter Tour and has been riding that wave of momentum ever since. No matter what series or class he competes in, Malcuit is always a title threat and has already wrapped up three class championships in 2022 on the national karting scene. Just last month, the Ohio-based driver finished on the podium in every race he started in, bringing home six trophies in just a few weeks. These performances helped Malcuit earn the EKN Driver of the Month for August 2022. 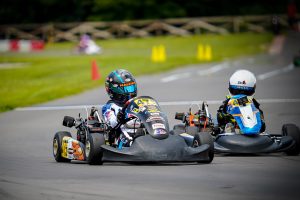 Malcuit started off his incredible month of August with the ROK Fest East event at NY Race Complex in Morristown, New York. In the nine-kart ROK Mini class, Malcuit finished every session – from warm-up to the Final in first place. His pace advantage was evident from qualifying, going eight-tenths of a second faster then his closest rival, and continuing that dominance into the first of three Heats, by crossing the line six seconds clear of second place. Malcuit took victory in the two remaining Heats, and come Sunday, would win the 16-lap final by 12 seconds. The win gave him a nice $2,500 and a ticket to the ROK Vegas event in Las Vegas later this year.

The next race on the schedule for Malcuit would bring him to Motorsports Country Club of Cincinnati for the WKA Grand Nationals and the final race weekend on the WKA Manufactures Cup Series calendar. He was on double duty for the weekend, running in Briggs 206 Cadet and the Mini Swift classes. In Briggs 206 Cadet, he started his weekend by setting fast time in qualifying. He went on to lead every lap in the Prefinal, and after fighting for the lead with AJ Stoner in the Final, came across the line first to win. Malcuit was unable to post a time in the Sunday qualifying session, meaning he had to fight his way up the order in the following races. He started the Final from the last row of the grid, but wouldn’t let that stop him, getting to the lead halfway through the race and sweeping the weekend in Briggs 206 Cadet.

In Mini Swift, Malcuit was the class of the field all weekend. He qualified on pole both days and was fastest in every competitive session on the weekend. He won both Prefinals by over four seconds, and walked away from the field in the Finals, winning Saturday’s main event by 11 seconds, and Sunday’s Final by just over nine seconds. After a dominant weekend of sweeping two classes and bringing home four trophies, it also meant Malcuit had done enough to win the championship in both Briggs 206 Cadet and Mini Swift.

Next on the calendar was a trip to the Michiana Raceway Park for the final round of the Cup Karts North America North Division program. At the South Bend, Indiana facility, Malcuit was able to secure victory on Saturday and runner-up Sunday. The results gave him his third victory of the season, five podiums in six rounds of competition to secure the divisional championship.

The final event of the month for Malcuit would be at New Jersey Motorsports Park for the penultimate round of the Stars Championship Series. Against 13 other drivers, he qualified on the front row in Mini Swift and would roll off in second for Heat 1. After finishing where he started in Heat 1, Malcuit took the win in Heat 2 by half a tenth over Travis Pettit. In the Prefinal, Malcuit would pick up where he left off, taking yet another win and setting himself on the pole position for the main event later in the day. He lost the lead off the start in tricky wet conditions and would end the 14-lap main event in second and on the podium.

This past weekend, Malcuit made his second start of the season at the United States Pro Kart Series in Mini Swift, and after not finishing the Final on Saturday, took home yet another win on Sunday to add to his resume for the 2022 season. He also becomes the eighth different driver with Nitro Kart to claim the Driver of the Month honor in his second time after claiming the award in December 2020. 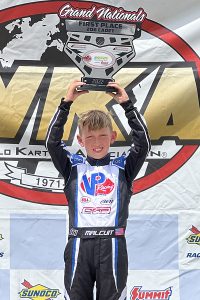 Chassis: Nitro Kart
Engine/Engine Builder: Lawson Speed Shop, Zanella Racing, Woltjer Racing Engines
Sponsors: Nitro Kart, Odenthal Racing Products, VP Racing Fuels, Bell Helmets, AIM
Series You Compete In: WKA, SKUSA, USPKS, Stars Championship Series, CKNA
Years Karting: 5 Years
How did you get started in karting? My Dad
What has been the high point in your racing career? Winning the 2022 Florida Winter Tour Championship
What are your goals in racing? To get to the NASCAR Cup Series
In a few words, how would you describe your driving style? Smooth
Funniest moment at the race track? Watching Grid Guys