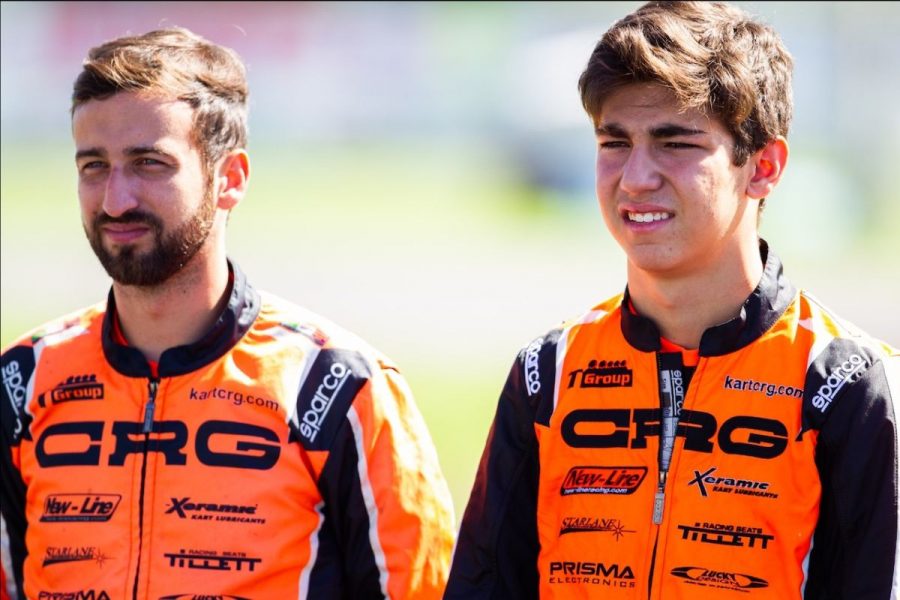 The CRG drivers missed out on podium but there was no lack of speed for them while competing in the FIA ​​World Championship OK & OK Junior in Sarno. The most important weekend of the year for the direct drive classes confirmed the competitiveness of the CRG chassis and only a series of unfortunate episodes, decisive in a single round event, deprived the CRG drivers of a more important result.

In the end, Olin Galli and Gabriel Gomez finished P8 and P10 respectively in the OK category, both closing the Final in the top ten, a result that, after a very positive weekend, was also within the reach of Simone Bianco, who has been very fast all weekend, but was forced to retire in the Final due to a race contact. The positive performances in OK were unanimous for the CRG drivers and confirm the great potential of the KT2 chassis, currently one of the most versatile and competitive on the market. Still talking about the OK class, Filippo Fiorentino and Adrian Malheiro remained out of the Final due to some contacts.

The CRG colors were also highlighted in the OK Junior category, where Scott Lindblom has always been among the fastest in the Qualifying races, where he also obtained a victory by securing P7 on the starting grid of the Final. At the start of the race he immediately entered leaders’ group in P3, but after a few laps a race contact knocked him out. A real pity because the Swedish driver had the speed and the race pace to take his chances. Despite the bitterness for the withdrawal, there still the awareness of the competitiveness of the technical material and the satisfaction for the staff of having taken the correct path for the future. In OK Junior Nikolas Roos, Sebastian Garzon and Enzo Nienkotterwere also very fast all weekend, but they failed to realize their performances with the qualification in the Final, due to two retirements in the Heat. More complicated, but certainly important from the point of view of the experience, the weekend of Nico Lahnalahti, Francisco Macedo, Michael Ider and Gabriel Sano.

The positive performance of the CRG chassis will certainly give an important input to the market in a 2023 key, not only in terms of sales, but also for the Racing Team’s driver line-up, which in all likelihood will see the arrival of some top level drivers. Now there will be two weeks of break and then we will get back to work in view of 2023 with the last WSK races of the season.

Full results of the Sarno weekend are available on the website www.fiakarting.com

Olin Galli (OK): “Our weekend was affected by some unfortunate episodes in Qualifying and in the first Qualifying Heats, circumstances that made me start the Final from the middle of the grid. In the Final my race pace was very good and I recovered 19 positions. Obviously, if I had started in a better position I could have done a different race and I could have managed the tires in a better way, but we know that the single-race events are like this and everything must be perfect at every stage of the weekend. P8 is a good result, but it certainly there’s a bit of a disappointment because we could have done better. Obviously, it is very positive for us to have such confirmation in a meeting of this level of how competitive our chassis-engine package is because this factor is at the basis of the work of the Factory Team”.

Simone Bianco (OK): “I have had the best weekend since I raced in OK and I certainly want to thank the technicians who followed me and the whole team for the very competitive technical material, both in terms of the chassis and the Iame engines provided by Boscaini. In the Heats I always finished in the top 5, scoring the best lap of the race 3 times and I managed the tires well, but unfortunately the retirement due to a contact at the start in the last Qualifying race made me start a bit behind in the Final. Unfortunately, at the start a new contact made me lose many positions, but with a good pace and many overtakes I climbed up close to the top ten, before a collision with a driver who ended up in front of me and who forced me to retire definitively. The balance of my World Championship is still very positive, because beyond the result that was missed when my potential was in the top ten, I think I drove with a continuity and a better approach than in previous races and I gained more confidence on my potential”.

Scott Lindblom (OK Junior): “It was a fantastic weekend despite the final result. I’m only in my 6th international race and being so competitive gives me a lot of confidence. The chassis and the engine have been perfect all weekend and the technical staff that follows me did an exceptional job, helping me a lot in managing every phase of this important race in the best possible way. In the Final I had a good start and I was calmly in the leading group, but while I was in P3 I received a strong blow from behind and I messed up the tires a little, going off-line and had to retire a few corners later. It was a shame as my speed was very good. I felt very good at the wheel, I was sure we could make a good progression and be very fast in the final stages of the race”.