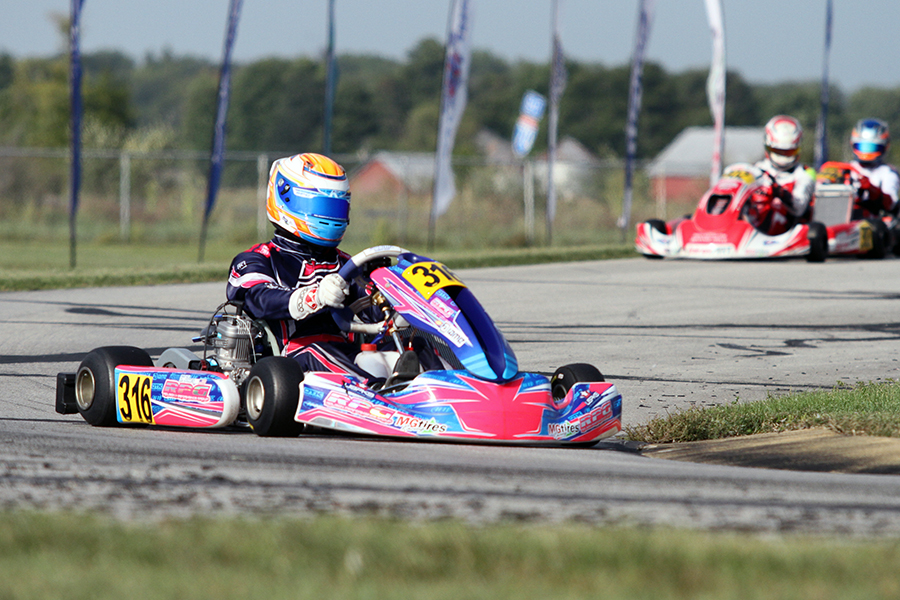 The 2022 United States Pro Kart Series went into the books on Sunday, completing the 10th season for the program. The eighth and final round of the series at the Heartland Grand Prix helped to decide who would leave the New Castle Motorsports Park facility as the last winners on the year, and those who would etch their names in history as class champion. Weather was once again perfect for Sunday with temperatures in the 80s and no threat of rain in the area. As you would expect, the racing amped up for the final day of action. Rolison Performance Group secured their eighth straight victory in the X30 Pro category as Hayden Jones doubled up on the weekend. Veteran Brandon Lemke piloted his Franklin Motorsports Merlin machine to the victory in the KA100 Senior finale ahead of championship driver Alex Stanfield.

The Franklin Motorsports X30 Senior category was a fight throughout the day with a dramatic main event to close out the season. Nate Cicero (RPG / Kosmic) found the speed overnight to secure the fast time in qualifying to clear the 26-driver field by over a tenth, including teammates Hayden Jones (RPG / Kosmic) and Ryan Norberg (RPG / Kosmic). A wild couple of opening laps sent both Cicero and Norberg down the order with Jones jumping up to the lead and driving to the win. Norberg was involved in contact late in the race with Diego Ramos (PSL / Birel ART), taking them both out of the race and at the back of the pack to start the Final. Jones led the field to the green flag but was quickly attacked by both Jeremy Fletcher (RPM / Tony Kart) and Cicero. It was Cicero that would be leading the pack until his rear bumper became detached from the kart, and was given the meatball flag to pull off the track. Fletcher took over the point with Pauly Massimino (SCR / CRG) and Jones now on his bumper. Jones jumped ahead of both by the halfway point, and from there was able to gap the group behind him fight for second. At the checkered, Jones secured his second victory of the weekend by just under two seconds. Fletcher eventually won the fight for the runner-up spot with 2019 KZ World Champion Marijn Kremers (PSL / Birel ART) up four spots to third for his third podium finish of the season. Norberg, starting 25th, fought up to fourth with fast laps of the race. Massimino completed the top-five.

The final standings in X30 Pro have Norberg winning his second straight championship by 429 points ahead of Jones. Massimino finished the year in third with Cameron Weinberg (SCR / CRG) in fourth. Kremers ended the championship chase in the fifth position. 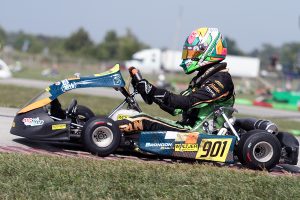 Once again, all 60 drivers took part in the main event for the Mike Doty Racing KA100 Senior category. Leading the way to open the day was the Alex Stanfield (GWR / Tony Kart) setting fast time in qualifying ahead of Saturday winner Christian Miles (MDR / LN Racing Kart). At the start of the Final, Miles along with a few others were pushed wide at the start and fell down the order. John Burke (Supertune / Tony Kart) jumped out to the lead until lap seven when both Stanfield and Brandon Lemke (FMS / Merlin) were able to push past. The two worked together to get away from the rest of the field with Stanfield at the point. It would be that way until the final circuit, exiting the I-70 corner. Lemke got a run and was able drive past Stanfield in the race to the checkered flag, taking the victory by only 29 thousandths at the line for his third victory of the season. Miles was able to muscle his way back through the field after sitting 14th on the opening lap to finish on the podium in third to end a solid Senior debut weekend. Josh Hotz (HDD / Exprit) had his best result of the season, placing close behind in fourth after starting 11th. Logan Adams (Comet / EOS) completed the top-five.

Stanfield secured the championship with his runner-up result for his second USPKS championship of his career, first in KA100 Senior. Lemke’s victory on Sunday put him second, 38 points behind in the final tally. Jeremy Fletcher (RPM / Tony Kart) finished the year in third with Aiden Levy (TKG / Alonso Kart) in fourth and Chase Hand (RPG / Kosmic) finishing fifth. 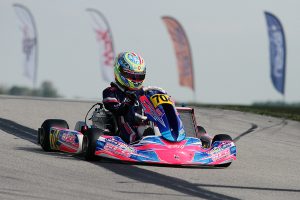 A fifth victory on the season to clinch the X30 Junior title for Caleb Gafrarar (Photo: EKN)

The Rolison Performance Group X30 Junior category saw eventual champion Caleb Gafrarar (RPG / Kosmic) sweep the action to secure the title. Gafrarar set fast time in qualifying and drove to the win in the Prefinal. Early in the Final, Sebastian Wheldon (JC / LN Racing Kart) and Enzo Vidmontiene (MottazSport / Kart Republic) challenge Gafrarar. By lap seven, Gafrarar was into the lead and gapped the field lap by lap. At the checkered flag, Gafrarar posted his fastest lap of the race to secure his fifth victory on the year, ahead of the field by nearly five seconds. The fight for second went down to the wire with a larger group forming in the end. Parker DeLong (RPM / Tony Kart) was able to grab the position, however, he was removed from the event for the day due to off-track actions by his crewmembers. Wheldon was next in the order, however, a pushback bumper penalty put his third in the order, advancing Max Taylor (RPG / Kosmic) to the second spot. Vidmontiene ended up fourth with Teddy Musella (RPG / Kosmic) in fifth.

The five wins on the season helped to put Gafrarar at the top of the championship standings to claim his first title in the X30 Junior category. Max Garcia (MPG / WPK) – who came into weekend leading the championship – settled for the second spot finishing 106 points behind. Ayden Ingratta (SCR / Redspeed) finished the year third ahead of Musella and Wheldon. 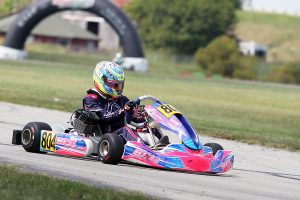 Two wins on the day for Gafrarar as he also won the KA100 Junior main event (Photo: EKN)

It was a double win day for Gafrarar (RPG / Kosmic) as he took the top honors in the Timmy Tech KA100 Junior class. The first class in the order saw Max Taylor (RPG / Kosmic) secure the fast time in qualifying as he edged out Ernesto Rivera (RPG / Kosmic) and Cooper Shipman (IRM / Tony Kart). A wild Prefinal ended with Rivera coming away with the win ahead of Gafrarar with Helio Meza (IRM / Tony Kart) improving to third from 17th on the grid. Grabbing the lead from the outside of row one, Gafrarar took advantage of the clear air in front of him to inch away from the field from the beginning. Leading all 16 laps, Gafrarar earned his third victory of the season, driving away to a five-second advantage. The fight for second went down to the wire with Rivera edging out Meza at the line with Max Garcia (MPG / WPK) right there in fourth. Taylor ended the day in fifth.

Meza did what he had to do over the weekend and in the Final on Sunday to secure his first USPKS championship in KA100 Junior. Garcia ended up 20 points short to end the season in second with Gafrarar only 38 points out in third thanks to his win on Sunday. DeLong ended the year fourth with Cooper Shipman (IRM / Tony Kart) in fifth. 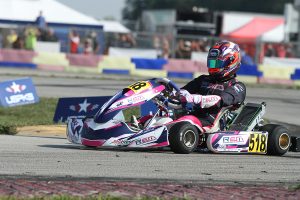 A victory secured the championship for Danillo Ramalho (REM / Kosmic) in the Speed Concepts Racing X30 Masters class. Saturday winner Renato Jader David (Orsolon / Tony Kart) was once again the driver to beat in qualifying with another monster lap. The field caught up in the Prefinal as Laurentiu Mardan (TecnoKart USA) and Ramalho battle for the top spot, with Renato securing the win. RJD set the pace to begin the main event with a pack of six formed at the front. Ramalho, who started fourth, inched his way toward the front and took over the point on lap nine. Fighting for second behind him allowed enough space for Ramalho to cruise to the victory, his fourth of the season. Renato won the battle for second ahead of Mardan with two-time defending champion Scott Kopp (FMS / Exprit) missing out on the podium in fourth with Niki Coello (Kart Republic) placing fifth. 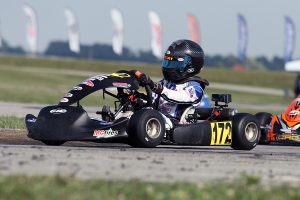 Isaac Malcuit won a drag race to the line in Mini Swift for his first victory of the season (Photo: EKN)

The DNJ International Services Mini Swift class was a duel between two drivers looking for their first win of the season. Prefinal winner Isaac Malcuit (Nitro Kart) and Carson Weinberg (SCR / CRG) broke away from the field in the 14-lap main event. Malcuit led the first 11 laps until Weinberg took his turn at the point. On the final circuit, Malcuit was able to slip past Weinberg early on in the lap, setting up for a drag race to the line. Weinberg misjudged which way Malcuit would go down the straight, and went two wheels off the track on the outside. Malcuit was able to beat out Weinberg at the line for his first victory on the year. Kai Johnson (AKT / Energy) – who posted the fast lap of the race – was able to climb up seven spots to the third step of the podium. Top qualifier Lucas Palacio (TKG / Kart Republic) crossed the line in fourth, however, lost three spots due to a penalty for contact. That promoted Tristan Murphy (Parolin USA) in fourth and Saturday winner Keelan Harvick (Parolin) placing fifth.

Harvick was able to secure the championship at the end of the day on Saturday, his second in two years and first in the Mini Swift category. Weinberg’s runner-up on Sunday helped to secure the second spot in the championship chase with Tyler Roberts (IRM / Parolin) in third. Palacio finished the year fourth with Johnson in fifth. 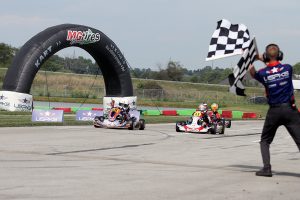 It looked to be a day of redemption for Marco Sammut (MDR / LN Racing Kart) in the Team Ferris Racing Micro Swift class. After suffering a tech DQ on Saturday, Sammut set fast time in qualifying and won the fight in the Prefinal for the win. Sammut was shuffled back to fourth at the start of the Final, but on lap four, retired from the race after an off-track excursion. Up front, Royce Vega (Benik) led the opening laps until he was shuffled down the order and then spun on lap 10 to retire from the race. It was a shuffle for the lead after Vega fell down the order, including Jacob Modjeski (FMS / Merlin) and Rocco Simone (Parolin USA). With two laps to go, the fighting continued and Modjeski was another victim of an off-track excursion, going off track at turn two. Simone led at the white flag, but was challenged by Woon and Nicolas Orbezo (IRM / Kosmic). In a wild last lap, Orbezo was able to come out with the lead in the final corner, and win the race to the checkered flag by 80 thousandths of a second ahead of Simone. Woon was right there in third with Cameron Marsha (Nitro Kart) and Drew Walz (Kart Republic) completing the top-five.

The fight for the championship was between Woon and Simone heading into the weekend. Despite Simone earning more points both days, Woon had enough of an advantage and did what he had to do in order to claim his first USPKS championship by 42 points. Jackson Gibson (RPG / Kosmic) finished the year in third with Vega fourth and Orbezo in fifth.

The 10 season of the United States Pro Kart Series is now complete. A new era of the program is set to begin in 2023 with the program expanding to five events, with more changes in store prior to the opening laps of the new year. Congratulations to those drivers earning hardware, success, improvement and championships on the season.