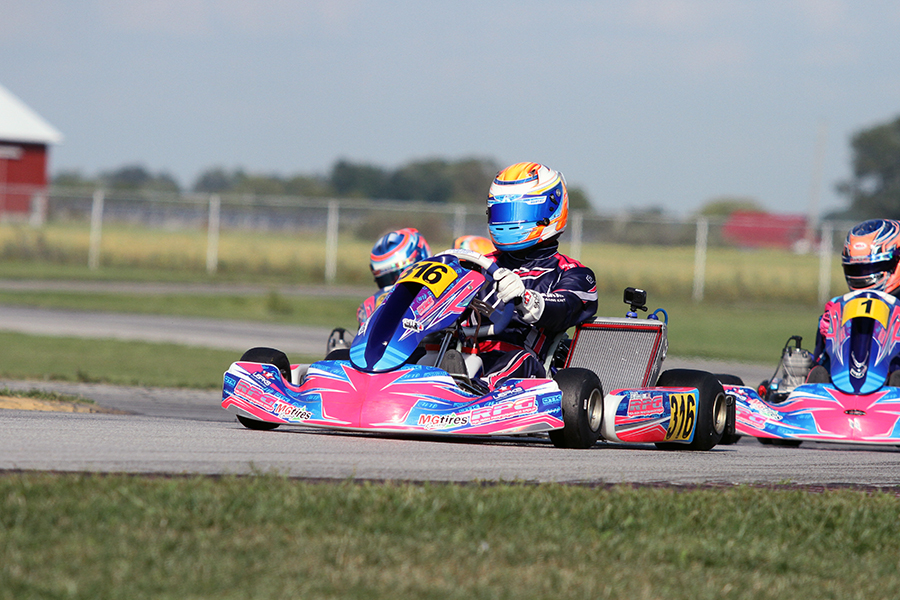 It could not have been a more perfect day for racing at the New Castle Motorsports Park facility on Saturday as the United States Pro Kart Series held Round Seven of the 2022 season, welcoming the first day of racing at the Heartland Grand Prix. Sunny skies all day long with warm but comfortable temperatures in the 80s with a slight breeze made everyone feel welcomed at the New Castle, Indiana facility. On-track, the action was hot as well with racing going down to the wire as expected in the seven IAME categories. Hayden Jones was able to end the six-race winning streak of his Rolison Performance Group teammate to score his second career X30 Pro victory while Christian Miles made his KA100 Senior debut memorable, pulling off victory in the 60-driver category.

The Franklin Motorsports X30 Pro saw a bit of history come to an end as provisional champion Ryan Norberg (RPG / Kosmic) had his winning streak of six main event victories come to an end thanks to teammate Hayden Jones. It was Norberg setting the pace in qualifying for the 27-kart field, however, in the early laps of the Prefinal he relinquished the top spot to Jones and Nate Cicero (RPG / Kosmic) by waving them through. The three pulled away with Jones picking up the win ahead of Norberg. The three were once again the class of the field in the 18-lap Final as Jones led the majority of the race. Both Norberg and Cicero took a turn, but Jones took over at lap 15 and established a gap over the rest, driving away to four tenths advantage at the checkered flag. Norberg settled for second with Donovan Bonilla (RPG / Kosmic) and Jeremy Fletcher (RPM / Tony Kart) able to come in late to slip past Cicero. Bonilla – who posted the fast lap of the race – had three-second pushback bumper penalty, dropping him to seventh in the results to move Fletcher on the podium and Cicero to fourth. Pauly Massimino (SCR / CRG) was elevated to fifth. 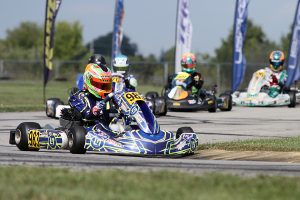 An announcement was made at the beginning of the day that all 60 drivers would compete in the Mike Doty Racing KA100 Senior main event, dropping the LCQ and keeping the two separate Prefinal events. A solid lap in qualifying put championship contender Alex Stanfield (GWR / Tony Kart) at the top of the time sheet, clearing the field by two tenths of a second. Senior rookie Christian Miles (MDR / LN Racing Kart) won the Prefinal ODD race ahead of Stanfield while Brandon Lemke (FMS / Merlin) came through to win Prefinal EVEN over Gavin Bayliff (TKG / Kart Republic) to fill out the front row for the main event. Five driver made up the lead group, including Miles, Stanfield, Lemke, Mick Gabriel (AEK / Kosmic) and Logan Adams (Comet / EOS). Stanfield led the for the first nine laps until he was shuffled back to the fifth spot. Miles was the driver to dethrone him from the top spot with Adams now the top challenger. Racing for second however provided Miles with a good gap through the remaining laps until Stanfield made the charge back to second and close up late. One his bumper through the final lap, Stanfield was unable to get a good enough draft to line in order to complete the pass, as Miles scored the debut victory by 86 thousandths. Gabriel crossed the line third for his first USPKS podium result as Lemke ended up fourth and Adams in fifth. All three drivers were on different powerplants with BBS, Allison, AEK, Woltjer and Comet taking the top-five. 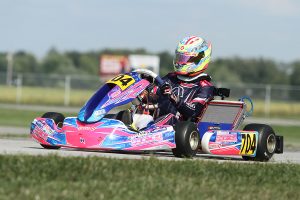 Caleb Gafrarar went from zero to hero in X30 Junior for his fourth victory on the season (Photo: EKN)

The execution in the Rolison Performance Group X30 Junior class was outstanding by Caleb Gafrarar (RPG / Kosmic). After a messing qualifying session with drivers fighting for track position, Ernesto Rivera (RPG / Kosmic) came away with the quick time, edging out teammate Teddy Musella by only one thousandths of a second. Gafrarar found himself in fifth. It would not last as he would drive himself up to the lead by lap four and pull out to a two-second gap. While taking the two laps to go signal, Gafrarar came across the line with engine issues, and was forced to retire. This allowed Ayden Ingratta (SCR / Redspeed) to secure the race win while Gafrarar would have to start at the tail of the 28-driver field with an engine change. It was a wild start to the 18-lap Final with lead changes nearly every lap through the first half of the race. By that point, championship leader Max Garcia (MPG / WPK) had put himself at the front of the field. Gafrarar had made his way up into the top-10 at the same time, and began picking off drivers one by one. By lap 12 he was into second and the following circuit, took over the lead. From there, Gafrarar drove away to a two-second advantage to claim his fourth victory of the season. Rivera won the fight for second ahead of Garcia with Ingratta just missing out on the podium at the line for third. Leonardo Escorpioni (Zanalla / Tony Kart) capped off the top-five. 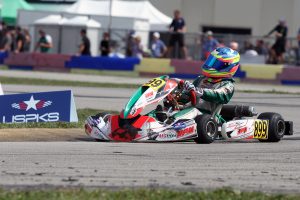 The TimmyTech KA100 Junior category featured 50 drivers on the day, however, was not broken up for Prefinals and started all of them in the main event. Thankfully, the drivers were able to get through both starts of the Prefinal and Final without any major issues. Luke Powers (JSR / Redspeed) put in a solid lap for qualifying, clearing the field by nearly two tenths. After fighting for the lead early, he would be shuffled down to sixth in the end as Caleb Gafrarar (RPG / Kosmic) came out with the victory. A solid lead group formed early and maintained through much of the race. Championship leader Max Garcia (MPG / WPK) was in the lead for some time before Helio Meza (IRM / Tony Kart) controlled the race. Just before getting the two laps to go signal, contact in the cell tower involving Meza and Garcia shuffled up the field, allowing Parker DeLong (RPM / Tony Kart) to slip past and take over the lead with a healthy advantage. Unchallenged, DeLong earned his first victory of the season to help put him back in the title chase. Fernando Luque (Supertune / Tony Kart) drove to second in his USPKS debut as Meza recovered to finish third. Caleb Gafrarar (RPG / Kosmic) ended up fourth with Ernesto Rivera (RPG / Kosmic) placing fifth. Garcia ended up back in eighth in the final results. 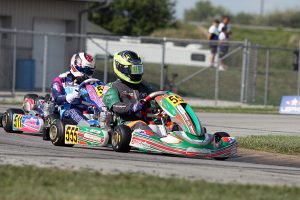 Renato Jader David came away with the victory on the final lap in the X30 Masters main event (Photo: EKN)

It appeared to be a day of Renato Jader David (Orsolon / Tony Kart) controlling the day in the Speed Concepts Racing X30 Masters class. RJD put down a monster lap in qualifying to clear the 16-driver field by over half a second. He went wire-to-wire in the Prefinal, driving away to a near three second advantage. In the Final, former series champion Laurentiu Mardan and championship leader Mario Barrios (RPG / Kosmic) stayed on his bumper. Barrios put himself up into second and on lap 12, took over the lead. On the final circuit, Renato made his move past Barrios into turn one with Mardan following through. Coming to the line, Mardan made a last draft attempt, coming up just 73 thousandths short at the line with Renato earning his second victory of the season. Barrios came across the line in third, however, he lost the bumper clamps and thus received a six-second penalty for the pushback bumper. That dropped him down to sixth in the order, moving two-time defending champion Scott Kopp (FMS / Exprit) up to the podium in third ahead of Scott Roberts (SCR / Redspeed) and Niki Coello (Kart Republic).

The results in the DNJ International Services Mini Swift category were left unofficial due to tech at the end of the day. On-track, Alessandro Truchot (Parolin USA) set fast time in qualifying while Keelan Harvick (Parolin) won the Prefinal. They were joined by Kai Johnson (AKT / Energy) and eventually Carson Weinberg (SCR / CRG) at the front of the field. Johnson led the second half of the race, taking the white flag as the leader. Weinberg, who fought his way up to second, challenged Johnson for the top spot through the middle part of the final lap. They raced into I-70 with Johnson and Harvick fighting for the top spot. Weinberg went from third to first around the outside on the exit of the corner, and with a great run was able to reach the line first for the provisional victory. Harvick missed out by 14 thousandths of a second with Truchot third and Johnson fourth. Devin Walz (Kart Republic) was the driver in fifth. Sunday morning, it was announced that Weinberg was removed from the results following tech inspection due to improper exhaust. That promoted Harvick to the win, his fifth straight, as Truchot and Johnson completed the podium. Walz was moved to fourth with Lucas Palacio (TKG / Kart Republic) finishing fifth. 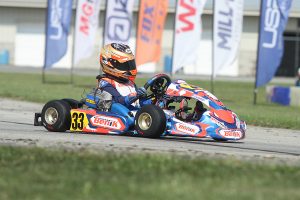 A similar situation ended the day for the Team Ferris Racing Micro Swift class, with the results unofficial pending tech situation. Marco Sammut (MDR / LN Racing Kart) started the day as the quick driver in qualifying ahead of the 26-driver field. Round Six victor Royce Vega (Benik) however put himself at the front in the Prefinal for the win. The main event was a great battle with the top four including Vega, championship leader Ashton Woon (Nitro Kart), Rocco Simone (Parolin USA) and Nicolas Orbezo (IRM / Kosmic). On the final circuit, Woon was able to go from third to first, crossing the line as the provisional winner. Vega was second with Simone third. Orbezo went off course in the final corner on the last lap, crossing the line in 18th. Woon was given a five-position penalty for the contact, dropping him to sixth in the provisional result and moving Vega to the top of the podium. Sammut is elevated to third ahead of Jacob Modjeski (FMS / Merlin) with Jackson Gibson (RPG / Kosmic) in fifth – pending the official results. Sunday morning, it was announced that Sammut was removed from the results following tech inspection for an improper exhaust. That put Modjeski on the podium in third, moving Gibson to fourth and Woon now in fifth.

Only one championship is decided with Ryan Norberg securing his second straight title in the X30 Pro category. The remaining six divisions will have the championship fight going down to the wire with Sunday’s action at New Castle Motorsports Park to decide this year’s title winners at the United States Pro Kart Series. Be sure to follow EKN Social Media for updates, results, photos and more all day.