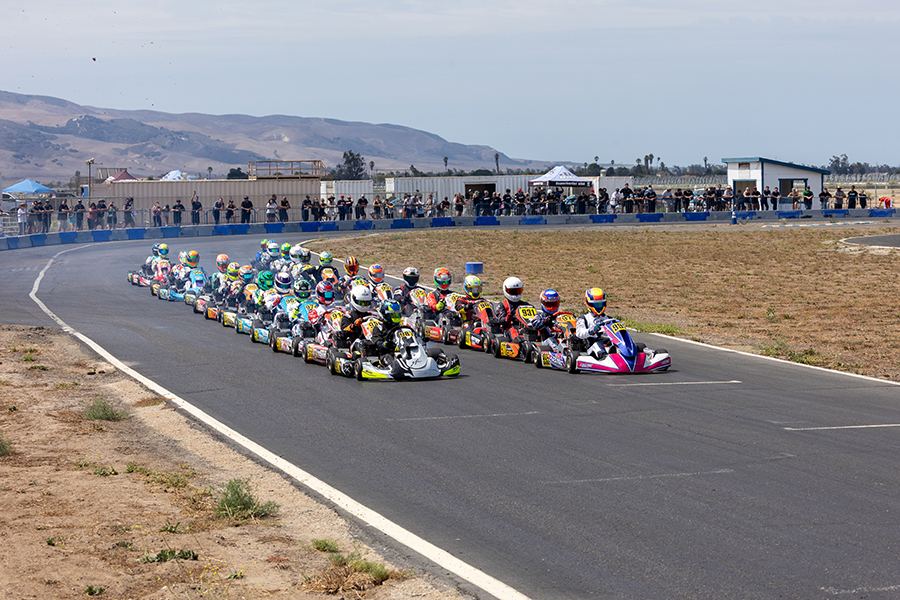 The penultimate round of the 2022 California ProKart Challenge was contested over the September 10-11 weekend at the Santa Maria Karting Association facility. The Santa Maria, California circuit has been a consistent stop for the Superkarts! USA regional program, welcoming nearly 100 entries over the two-day event with perfect Pacific coast weather greeting them. A number of drivers picked up their first victories while others continued their winning streaks – as the fifth round of the 2022 championship program shaped the title chases even more heading to the year-end event. 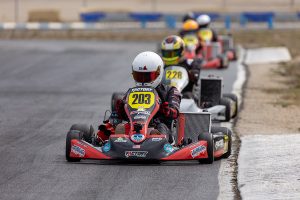 Billy Musgrave was able to double up on the weekend, winning Pro Shifter and his first of the year in KA100 Senior (Photo: Spencer Russell – photosbysmr)

The first victory of the weekend came in the Factory Karts Pro Shifter class, where Musgrave came into the weekend leading the championship with three victories. Musgrave posted fast time of 46.426 in qualifying to clear the six-driver field by over a tenth. The holeshot in the Prefinal, however, went to Keawn Tandon from the outside of the front row. Tandon led the entire distance to win the 14-lap race. Musgrave ran second, but at the halfway point retired. Musgrave worked his way back to the front early in the Final, reaching the top spot by lap three. From there, Musgrave showed the way to close out the 24-lap race with another victory. Tandon ran a close second with Ansel Baldovin rounding out the podium, his second of the season. Luis Quinones was fourth with Luca Bortone fifth.

The largest category of the weekend was the HRT Driver Development KA100 Senior class with 30 drivers competing. Leading the way in qualifying was Ethan Lampe, posting a 49.571 to clear the field by over a tenth. Lampe led a majority of the Prefinal, going on to win ahead of Izaac Gutierrez and championship leader Frankie Mossman. Sitting in fifth was Musgrave, posting the fast lap of the race. That speed carried over into the Final, where Musgrave was part of the lead group fighting for the victory. Mossman was among those until he was shuffled down the order. Gutierrez led for a number of laps until he was challenged by Aiden Kempf. They went back and forth for the lead, with Musgrave waiting in the wings. On the final circuit, both Gutierrez and Kempf were part of an incident in the final few corners as Lampe went from fifth to first for the provisional win. Lampe, however, was penalized two positions for cutting the track, thus promoting Musgrave to the victory – his first of the season in the class. Blake Nash fought up from eighth to end up second, as Lampe was classified third. Timothy Carel was fourth with Kempf able to earn the fifth spot. 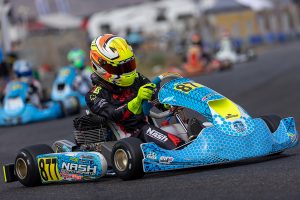 Jesus Vasquez Jr. is two for two on the year in the KA100 Junior division (Photo: Spencer Russell – photosbysmr)

Jesus Vasquez Jr. was able to claim a second victory on the year in the Nash Motorsportz KA100 Junior class making only his second start of the season. It was a near sweep of the event for Vasquez. However, Round One winner William Rasmussen showed the way in qualifying with a 50.425. Vasquez was fourth in the session and led the majority of the Prefinal en route to the race win ahead of Rasmussen. The early laps of the 24-lap Final saw a number of lead changes, with Vasquez slipping down to fourth at one point. By lap seven, Vasquez was back at the lead and showed the way for the remainder of the race for the victory. Keagan Kaminski moved up late to grab the second spot for his best finish of the season. Charlies Smith followed through to round out the podium in third. Valentino Garbarino climbed 13 spots to fourth. However, the hard charger award went to Shea Aldrich, improving 17 spots to fifth. Rasmussen fell to ninth in the final order.

Among the four drivers to sweep the weekend in their respective categories was Turner Brown in the Empire Karts Mini Swift class. Brown began with clearing the 15-driver field in qualifying by nearly three tenths of a second. Turner would then go on to lead every lap of the Prefinal and Final, extending out to a near 10-second advantage in the 22-lap main event for his first victory of the season. The fight behind him was for second, as Johnie Stamps beat out Nico Sarphati for the runner-up position on the podium. Nixon Ellsworth was fourth with Mason Duchesne placing fifth. 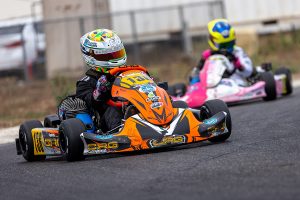 Braydon Wagner was able to secure the weekend sweep for his first victory in the P1 Racing Engines Micro Swift division. Wagner put down a lightning quick lap in qualifying to clear the seven-kart field by over three tenths. He slipped to fourth at the start of the Prefinal but fought his way back to the front by the end for the win. The Final was all Wagner, leading all 22 laps and driving away to an 11-second gap for his first series victory. Julian Sanchez drove to second with Matthew Cagle completing the podium. Byron Borneman finished fourth with Citizen Carbol in fifth.

Veteran driver Billy Cleavelin never relinquished the top spot all weekend in the Leading Edge Motorsports X30 Master class. Cleavelin set fast time in qualifying and then led each lap of the Prefinal and Final to claim his third straight victory on the season. Tony Rossetti was second with Robert Switzler classified third ahead of Terry Giffen after penalties were assessed – while Scott Nealon finished fifth. 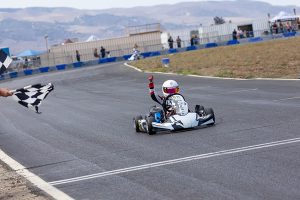 It was a similar result in the Mike Manning Karting KA100 Master category, with Ronnie Swaim taking the top spot in a sweep on the weekend. Swaim set the pace in qualifying and won the Prefinal and Final for his first victory of the season. Ron Schoonover was second with Steve Wiener in third.

The 2022 California ProKart Challenge is set to conclude with the sixth and final round held on October 1-2 as the program returns to the CalSpeed Karting facility in Fontana for the final time ever as the popular facility will be shutting down in December. Registration is currently open for the series finale at the MotorsportsReg.com SKUSA page. For more information on anything related to Superkarts! USA, please visit the website – www.superkartsusa.com and be sure to follow the Superkarts! USA Facebook page, Twitter and Instagram accounts.