Over 1000 Combined Entries During the Five Race Weekends 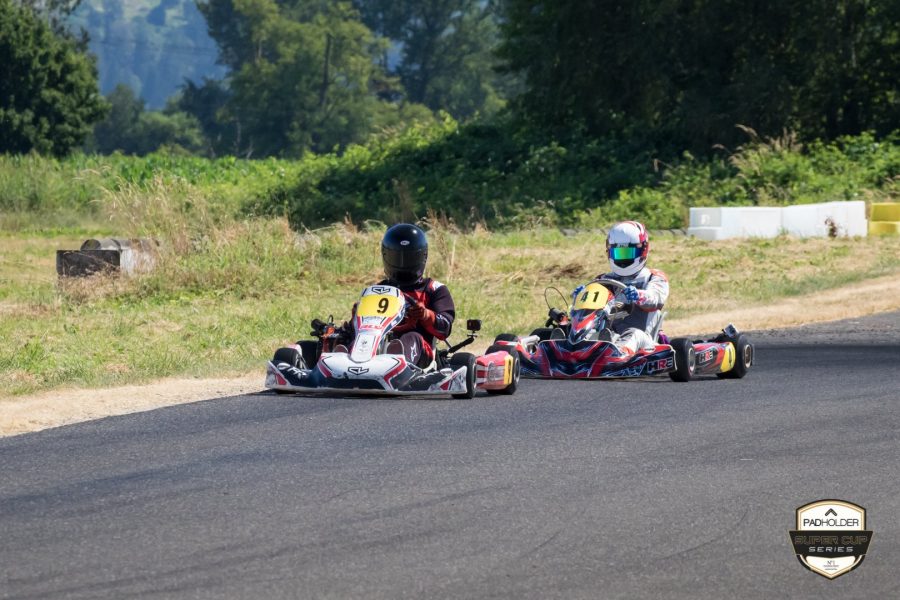 The 2022 Padholder Super Cup Series Sprint presented by N1 Collision Group has come to a close on what was an incredibly successful year for the series. Making stops at five tracks across the northwest portion of North America, four of the events brought together over 200 entries, with a record of 351 entries for the first weekend in the Tri-Cities. With 14 classes to choose from at each event, there was no shortage of entertaining racing on track throughout the memorable 2022 season.

Chinn Construction Senior Briggs 206 was by far and away the largest class this season, with 49 different driver taking part throughout the five race weekends. Boden Barnwell took top honors at the end of the season, being crowned champion after winning half of the races during the season. It was a close battle for the title up until the final day, where championship runner up Zak Meyer would have a less then optimal finish for the day, and would drop out of the title hunt, finishing 122 points back from the lead after winning three races throughout the year. Although finishing runner-up, Meyer still had a positive season, with three wins and six podium finishes in 2022. Riley Miller came in third, being the only driver in the entire class to attend every race. Giovani Benson finished the season fourth with six top-five finishes to his name, and Henry Tadeusiak ended the year fifth in the standings. 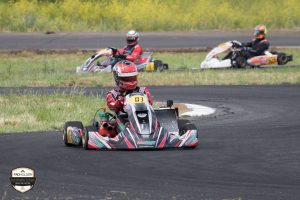 With the largest average attendance for all classes, Huggler Race Engines TaG Senior saw 32 drivers compete in 2022, and 21 of those scoring top-five finishes. Antonio Costantino finished the season 194 points clear of second, giving him the title for 2022. He won three races this year and swept the weekend in Medford. Dylan Ulinder came out of a tight battle for second, finishing just six points in front of third place season finisher Gracie Brown. Although neither of the two managed to stand on the top step in 2022, they were both consistently in the front scoring points, helping their campaigns for a top-three end to the season. Marco Simpson would finish fourth after scoring his one and only podium in Medford on Sunday, and Ian Pirie came ended fifth on the season.

Nik Goodfellow put together a solid season in 2022 to claim the title in the XCCEL Racing TaG Heavy class. Goodfellow had the most wins of anyone on the season with four and taking both wins in Chilliwack to elevate himself above the rest of the field. The race for second was covered by only 23 points from second to fourth with Cameron Cassels earning the position in the final standings by 15 points over third-place Chad Wallace. Coming home only eight points back with three wins on the season was Hunter Hesseltime. Bill Ryan ended the season in fifth, running only three race weekends but finishing outside the top-10 only once. 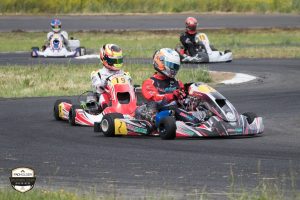 Helmet House Shifter category provided some close racing in the fastest karts in the series. Five drivers all stood on the top step at some point during the season. Evan Arnold took top honors overall for 2022, scoring two round wins and failing to finish in the top-five only once on the season to claim the championship. Cole Hegar ended the standings runner-up, scoring a win at Chilliwack, as Mario Gill finished the year in third, taking two wins during his campaign. Ricky Worley’s stand out performance at Medford helped propel him into fourth in the standings as Zane Walker came fifth with a best result of third-place on Saturday at Medford.

Ranked among one of the top attended classes on the season is ORP Junior 2 Briggs 206. With 35 drivers competing and an average of 17 drivers per round, Junior 2 was always a category to watch. Five different drivers won a race during the season, including champion Massimo Valiante. With six victories on the season, he won the title by just under 100 points to Kaleb Keck, who despite his consistent string of finishes up front, he never won a race and settled for second in the final point standings. Trestin Moore came in third with one win on the year and Ben Corkey behind in fourth, who took the win at the first round of the season. Regan Kerr finished fifth in the standings with one win on the year Sunday at Chilliwack. 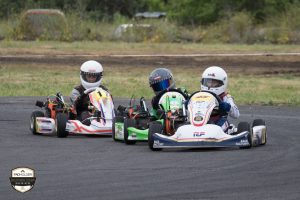 Cheap Fast Racing Junior 1 Briggs 206 was another class with consistently high numbers, making for an exciting season. Colt Schlotthauer took the crown for 2022 with four round victories to his name. The drivers finishing second through fourth in the standings all had two day wins to their name. Kase McKinney ended the season second in the standings with Jack Bowdish in third and Lewis Dilley fourth. Johnathan Walker may not have grabbed a win in 2022, but his consistency throughout the season put him fifth in the final standings.

CMC World Formula category is the second championship for Boden Barnwell on the 2022 season. Barnwell took the top spot at the end of the year, outscoring his sister Brinley Barnwell in second by 89 points. The Barnwell’s would rack up half of the race wins on the season with Boden taking four and Brinley securing one win. Joe Filipanko took third place in the final standings, recording six top-five finishes during the season. Bryan Green finished behind in fourth with five top-five results of his own. Brennan Gregg had a rough start to the season but climbed back after consistently doing what he needed to secure fifth in the championship. 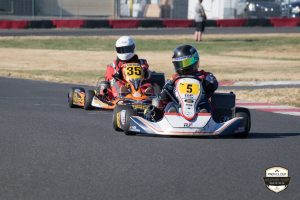 Chris Worley was crowned the champion of XCCEL Racing Shifter Heavy after a tight battle with vice-champion Rusty Lingle. At the start of the season, Lingle took the first two wins with Worley coming in runner-up for both days. Lingle would hold the lead for most of the season, however a 12th place finish at the series finale hurt his chances in the point standings. Worley took advantage, winning the final round to secure the series championship with Lingle in second. Thomas Riddle ended up third in the standings after winning twice in 2022. Aaron Dost took fourth with Petri Ottavainen in fifth.

Burly Products 60cc saw an intense fight for the title during the course of the season, with the main protagonists being Colt Schlotthauer and Jack Bowdish. In the end, Schlotthauer would come out on top by just 23 points over Bowdish. Schlotthauer won five races during the season with second place man Bowdish only scoring two, but relied on his consistent results to keep him in the title hunt. Kase Mckinney came home in third after a long season where he took the remaining two wins not held by Schlotthauer or Bowdish. Charlie O’Neill ended up fourth, with a second place as his best result of season. Viyaan Bhindi caps off the top-five earning with two top-three finishes in 2022. 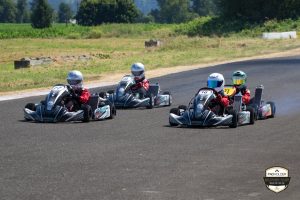 Arjun Gill took the championship crown for Lane Landscaping & Fencing TaG Cadet in dominant fashion by ending the season with a 419-point lead to his nearest rival. Gill was one of four drivers to earn victories during the season, securing four himself. Mathias Broeken finished the standings in second, scoring one win in the final race of the season. Brandon Ng ended up third with three top fives to his name, and James Bedard finished the year in fourth with one win. Luca Popescu would be the final driver in the top five of the standings, highlighted by a win on Sunday at Tri-Cities.

Italian Motors USA TaG Junior Champion Massimo Valiante fought hard with vice-champion Matteo Alfano during the season, which saw the two drivers separated by 48 points in the final tally. Timothy Clarke secured third on the season with one win at Medford, and fourth place driver Sydney Cassels would also score a victory on the season on Sunday in McMinnville. Closing out the season in fifth would be William Ginn, getting three second place finishes on the year. 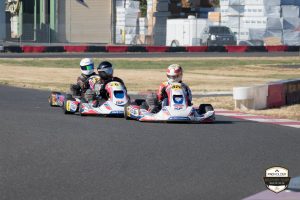 Augie’s Fiberglass NW 100cc Junior had the closest title fight of any of the 14 classes in 2022. Trestin Moore and William Ginn both swept two weekends each during the season, and it would come down to who had the better results when the other was off winning. In the end, Moore was crowned champion by just 10 points to Ginn. Mauricio Parada came in third, finishing in the top three eight different times. Teaghan McNeill ended the season in fourth with a best result of third-place on the first Sunday race of the season. Kaleb Keck closes out the top-five in this year’s standings.

A total of 18 drivers took part in Generations Bar & Grill NW 100cc Senior throughout the five stops on the 2022 calendar, where Sergio Tapia Jr. took the title of champion. He consistently was up at the sharp end of the field and that consistency paid off. He scored two wins on the final weekend of the season and grabbed a podium result on two other occasions earlier in the year. Jack Doyle ended up second in the standings with the most wins of anyone in the category, earning five wins in six starts. Third place championship finisher Lukas Eyth took the opening round win and finished in the top-five for all of his races. Fourth place in the standings went to Joey Cazer as Zak Meyer ended up fifth, earning three top-five results on the season. 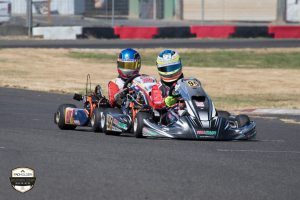 Midnight Motorsports Kid Kart saw the future of the sport battle it out on track with 12 different drivers competing in 2022. The non-points scoring class achieved its biggest turnout of the season in Chilliwack on Saturday, when eight different Kid Kart drivers took to the track.

The end of year banquet for the series will be held at the Embassy Suites in Tukwila, WA, on Saturday, December 3. For more information about the series and the banquet, visit their website at www.padholdersupercup.com.