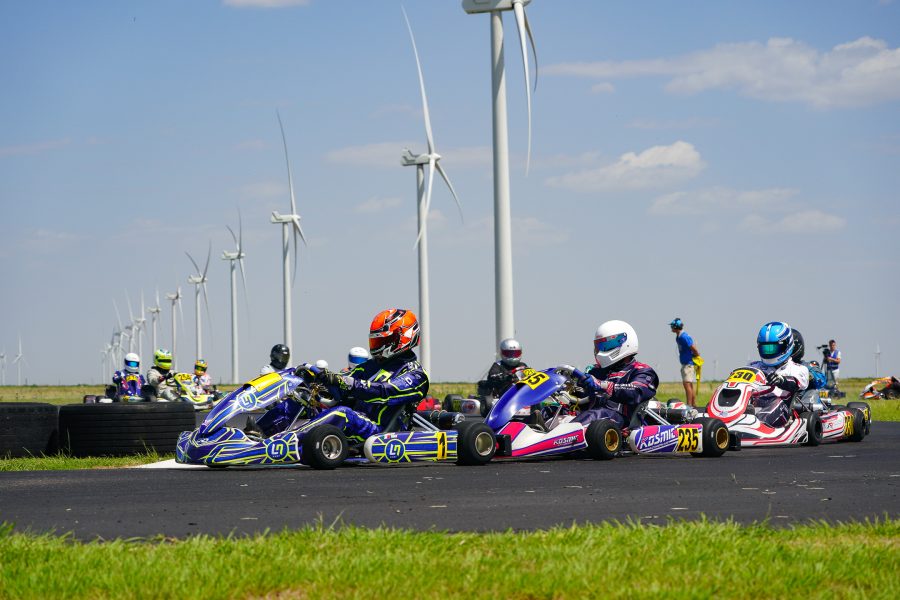 After three outstanding events to start the 2022 season, the Texas Sprint Racing Series Presented by Auctionetx headed to the Amarillo Kart Circuit in Amarillo, Texas on August 5-7 for the penultimate round of the championship. A packed paddock of 163 drivers took to the scaled-down replica of the Turkish Grand Prix Istanbul Park circuit, which is seen on the Formula 1 calendar. The track has become a favorite among racers and played host to some close and thrilling action. 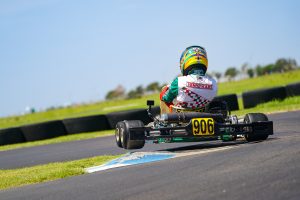 Exertech KA100 Senior was the largest and most competitive field on the weekend, with three different drivers winning races on during the event. Peyton Phillips started his weekend the best way possible by going fastest in qualifying, and he would start next to Alex Stanfield in the opening heat race. Jake French picked off a couple places at the start of the run and made a late charge to take the win in Heat 1. Brayden Robertson was another who, like French, made a late race surge from fifth to place second at the stripe. Polesitter Phillips ended up fifth, but he didn’t let that stop him in Heat 2, in a race that saw Peyton, Aden Rudolph and Stanfield all lead at some point during the 10 laps. In the Final, Stanfield got shuffled back on the start, pushing him all the way back to sixth, but he would recover and get back up to the front and snatch the lead away from Robertson on lap eight. The battle wasn’t over as Robertson and Rudolph were also on the scene, fighting hard for first. Stanfield would prevail in the end, winning an epic final and taking max points going into the final round of the season. Phillips ended up in second with Rudolph in third after showing the pace to win all weekend. Drew Chappell snagged fourth and Robertson ended his Sunday in fifth. 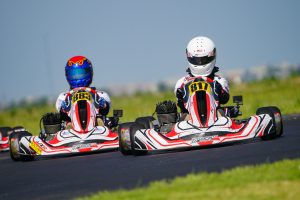 Skinner stormed to victory by over 2 seconds in the Final (Photo: Studio52.us)

4T Concrete Pumping KA 100 Junior saw some close battles and hard racing all weekend long, with a handful of drivers being eligible to win at any given moment. Davis Cunningham had top speed in qualifying, setting himself on pole for the first of two heats. Ivanna Richards started third and moved forward take the Heat 1 win after a pass for the lead on lap six. Cunningham would strike back on Sunday morning, winning out over Richards in a closely contested Heat 2. Going into the main event on Sunday afternoon, it was very much ‘advantage Cunningham’, as he led the opening three laps of the Final. Landon Skinner would soon take over up front after a quiet day on Saturday. Cunningham came back at Skinner, but would drop out of the race on lap six. Skinner would also drop down to fourth on the same lap but managed to get back to the lead by lap 10, and would then hold that lead for the rest of the Final. Richards finished second, just 2.5 seconds back from the lead, while Diego Guiot took third. Ragan Saville and Graham Trammell capped off the podium. 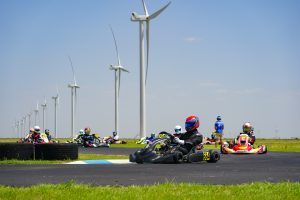 Cruz Racing Development 206 Senior has been a class to watch all season, with incredibly close racing throughout the calendar. The level of competition in this class makes it even more impressive when a driver can go on to dominate the weekend, and that’s exactly what Braxden Tregre did during the weekend. Tregre would take pole by three thousandths over Tyler Stephens, and Macon Moore would make up a top-three that was separated by just 0.02 seconds. Tregre led every lap in both heat races, going untouched by his opposition. In the Final, Caiden Wolfe got past Tregre with half of the race remaining. Wolfe led for seven laps until Tregre got back by him in the closing moments of the race, making it a clean sweep for Tregre on the weekend. Mikey Bowlin finished runner-up while Wolfe completed the podium in third. Ethan Wolfe would come in fourth ahead of Macon Moore in fifth. 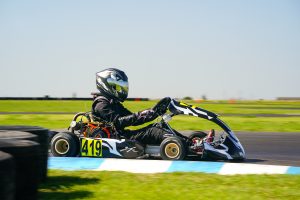 Saville fended off the Junior pack to take a hard-fought win (Photo: Studio52.us)

Ragan Saville was untouchable in Saville Electric 206 Junior during the course of the weekend. Saville took pole position on Saturday morning and never gave up the lead past that session. He won both heat races and the Final on Sunday while leading every single lap during the races. Saville was able to build up gaps of a couple of seconds in both heat races, further cementing his pace advantage on the weekend. While Saville was up front all weekend, Jenson Harrell and Parker Fitz battled it out for the second spot throughout the weekend. Harrell got the better of Fitz in qualifying, while Fitz responded by getting second for both heat races. The two would follow each other closely in the Final, with Harrell getting past Fitz at the halfway point. Harrell would take second for the weekend with Fitz in third, Sawyer Roussel in fourth and Alfred Alvarez del Castillo in fifth. 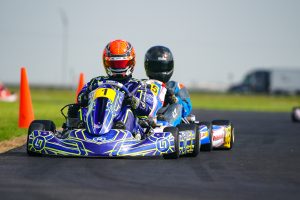 Kart Racing Solutions KA100 Master started their weekend out with a close fight for pole between the two main protagonists on the weekend, Morgan Lebaron and Miguel Mier. Lebaron snatched pole by three hundredths over Mier and held that pace for the first few laps of Heat 1. However, from lap three of Heat 1 until they crossed the line in the Final, Mier led every lap from that point on and would take victory on the weekend. Robby Mott took second on the weekend after being consistent and staying in that top-five battle. James Lundberg finished third to cap the podium. Lebaron would come fourth ahead of Randy Russell in fifth. 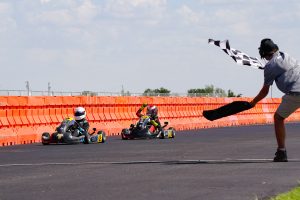 Wargo just held off the Cadet pack in the Final (Photo: Studio52.us)

Derek Wargo took a well-deserved and hard-fought win in Ferris Mowers 206 Cadet, in a class of 18 karts. Wargo qualified third behind Brayden Westfall and Jaxon Young, just two hundredths off the pole-winning time. He would go on to show that he had the dominant pace during the heat races, finishing where he started in Heat 1, but would win the next two races including the all-important Final. Young and Westfall gave it their all to try and challenge Wargo, but it wasn’t enough. Young would take second in the Final ahead of Matteo Quinto, who broke into the front of the pack in the last race of the weekend. Paxton Dyson would end his day in fourth with Thomas Smith behind in fifth. 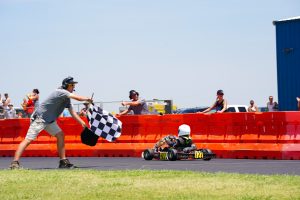 In Alan Rudolph Racing Academy Mini Swift, it was the Berry brothers of Mason and Carson who took turns being upfront throughout the weekend. They started the weekend with Mason going fastest in qualifying and his brother Carson right behind just a few tenths shy of pole. David Ybarra and Derek Wargo were the only two drivers who would really give the Berry brothers a run for their money throughout the weekend, with Wargo always being on the coattails of the Berry pair. Mason would go on to win the first heat with Ybarra behind in second and Wargo third. Carson Berry fell down to fourth in the first heat, but he rebounded in the second to take victory going into the Final. Mason bounced back to the win in the Final, as Wargo kept the pressure on for the entire race. Wargo finished second with Quinto behind in third. Ybarra came home in fourth with Carson Berry in fifth. 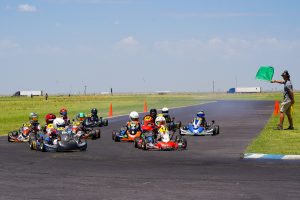 Kaspar won out in the battle for the lead at the end of the Sunday Final (Photo: Studio52.us)

Houston Freightliner / Western Star Micro Swift saw Colton Schniegenberg and Kade Kaspar battle it out for supremacy the entirety of the weekend. Schniegenberg took the pole in qualifying by a tenth and a half over Matthew Cagle. Kaspar ended up in fifth in the timed session but ended up surging his way through the front runners in Heat 1 to claim victory on Saturday after the front two rows made contact in turn one. This allowed Kaspar to run away on the opening laps. Schniegenberg would come back to form on Sunday morning, taking the Heat 2 victory, leading every lap, where Kaspar finished third. During the Final, Schniegenberg found trouble a couple of laps in and fell down the order, allowing Kaspar to take the lead for the majority of the race. He battled with Aston Wyatt at the end of the race but would come out on top, taking the win in Micro Swift. Wyatt finished second ahead Schniegenberg in third. Cagle came fourth in the end while Paxton Dyson capped the top-five at the flag. 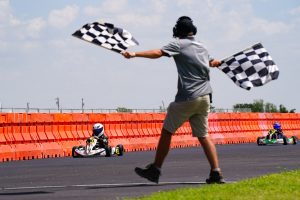 Mitchell was clean and consistent all weekend (Photo: Studio52.us)

Helix Electric Honda Kid Karts crowned Theodore Mitchell as the winner for Round 4 of the championship, winning both heat races and the Final. He started Saturday by putting his kart P2 on the grid next to fast qualifier Andrew Anastasio. Mitchell made the move for the lead in turn 10 and held onto that lead for the rest of Heat 1. Mitchell went on to win the Final on Sunday by over a second to Dutch Westbrook and Anastasio in third. Fourth went the way of Brody Stoffle and Asa Davidson rounded out the top five.

The Texas Sprint Racing Series Presented by Auctionetx will wrap up its 2022 season at Speedsportz Racing Park at the ‘Fall Finale Under the Lights’. Be sure to follow TSRS on Facebook and Instagram, and get details on everything at www.texassprintseries.com. Those interested in supporting the 2022 program with sponsorship, please contact them via email at info@texassprintseries.com.