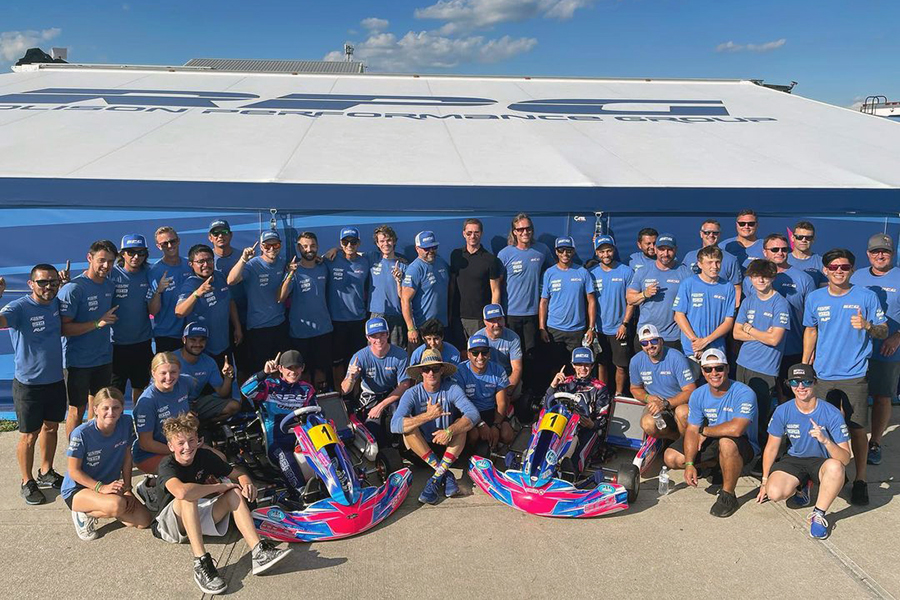 The third and event of the 2022 Superkarts! USA Pro Tour brought Rolison Performance Group to what has become the traditional location for the annual SKUSA SummerNationals – the New Castle Motorsports Park. A total of 24 drivers under the RPG tent would take on the 1-mile track that has become a staple of the American karting calendar during the July 29-31 weekend. Series titles were up for grabs and crucial championship points were on offer, with multiple RPG drivers going into the weekend with a mathematical shot and winning a Pro Tour title. 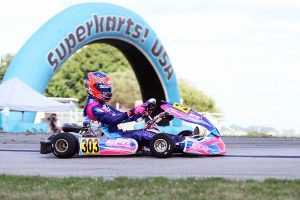 Ryan Norberg was on the hunt for his fifth SKUSA Pro Tour title in X30 Senior but it wouldn’t come easy, as teammate Hayden Jones took pole for Saturday with Paul Bocuse and Donovan Bonilla in third and fifth, making it an RPG inside row, as Norberg would roll off in eighth. Jones would hold onto first in the Prefinal with Bocuse in second, Norberg fourth with fastest lap and Bonilla fifth. In the Final, there was no stopping as Norberg took the win on the day. The victory would earn him enough points to secure the provisional fifth career SKUSA Pro Tour title. Jones capped off an impressive day on the podium in third, as Edward Portz came from outside the top-10 to finish in fourth. After a rough start to the day, Laurent Legault finished in seventh as Bocuse ended up eighth. Norberg lead the RPG tent in Sunday qualifying putting his Kosmic on the inside of the second row in third, with Jones not too far behind in sixth. Legault started fourth next to Norberg but plummeted down the order on lap one and ended in a DNF. Jones would also hit trouble as he would finish 11th, but Norberg kept pushing to take the win in the Prefinal. Norberg went untouched in the final race of the 2022 SKUSA Pro Tour, winning by just under three seconds to record a fifth straight victory. Jones fought his way forward to grab a second podium on the weekend, placing runner-up for a RPG 1-2. Legault had a rough day ending up in 15th and same can be said for Bocuse in 25th. After a good qualifying on Saturday, Bonilla would finish the weekend with a DNF and 18th on Sunday. Wes Duchak would end up in 12th both days after making his way through the field on both occasions. 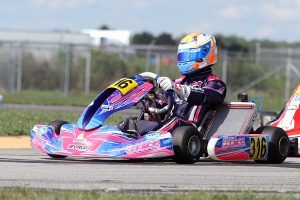 Caleb Gafrarar, Max Taylor and Emma Kate Scarbrough were the three drivers hailing the colors of Rolison Performance Group in X30 Junior. On a weekend that could see Gafrarar take the crown, he started off with a bang going third fastest in qualifying on Saturday, and would line up just in front of teammate Taylor, and Scarbrough would be just outside the top-10. Gafrarar would then hold position in the Prefinal and finish in third, while both Taylor and Scarbrough would hit trouble during the race. In the Final, Gafrarar would battle hard to get his Kosmic up to second and on the podium. On Sunday, Gafrarar would grab pole while Taylor and Scarbrough lined up 10th and 11th. Gafrarar would go onto to take victory in the Prefinal. The Final saw the top three, including Gafrarar, build nearly a 10 second lead to the rest of the pack, allowing them to fight it out for the win and in the end, Gafrarar would have to settle for second. More importantly, he had done enough to take the X30 Junior Championship for the 2022 SKUSA Pro Tour. Taylor would finish in the top 10 both days in eighth and sixth – earning the third spot in the championship chase. Scarbrough would make it all three karts in the top 10 on Sunday after she finished ninth.

KA100 Junior saw Caleb Gafrarar start off his weekend the best way possible, putting it on pole and would start in front of the 41-kart field. Unfortunately for the championship hopeful, he had troubles in the Prefinal and was sent down to 16th after a commanding performance. He fought back in the Final to end up eighth. On Sunday, Gafrarar would qualify on the front row yet again this time in second. He would then convert that front-row start into a win in the Prefinal. In the Final, all of the top five karts lead at some point, Gafrarar would hold on in the chaos to achieve third. Emma Kate Scarbrough was able to sneak into the top-20 both days finishing in 19th twice. Gavin Wardle had a best finish of 25th on Saturday and finished 35th on Sunday. Lillian Scarbrough ended a hard-fought weekend in 34th and 30th. 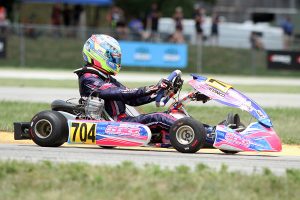 The duo of Jackson Gibson and Rafael Canas represented RPG in the Micro Swift class. Gibson started off the weekend strong by setting fast time in qualifying on Saturday by just under two-tenths of a second to his nearest rival. He would go onto convert that pace into a win in the Prefinal and secure pole for the main event. Gibson would fall back on lap one of the Final and although he put up a heroic fight, just wasn’t able to hold the lead and finished in a respectable seventh. Sunday would also prove to be a challenge, with Gibson qualifying outside the top-10. Although he put in yet another heroic drive to take the Prefinal win, opening lap contact pushed him down to 14th. He powered through to catch the tail of the lead group at the end, finishing ninth. Canas completed his first SKUSA Pro Tour weekend start with finishes of 23rd and 22nd.

The Pro Shifter roster under the RPG tent expanded with Hannah Greenmeier and Victor Jimenez joined by the newest member of the RPG family, SKUSA Pro Tour Champion and three-time SuperNationals winner Danny Formal. Greenmeier would lead the trio in Saturday qualifying, going fifth fastest in an extremely tight session. Unfortunately, Greenmeier and Jimenez would suffer a DNF in the Prefinal leaving Formal to take eighth. In the Final, Greenmeier would scythe her way through the field, making up 16 spots to end up sixth and earning her the hard charger award. Formal ended up ninth and Jimenez 20th. On Sunday, Greenmeier equaled her starting spot from the day prior in fifth, with Formal improving to seventh and Jimenez in 22nd. Both Greenmeier and Formal retired on lap two with their own issues, leaving Jimenez to finish 18th. Greenmeier put in a repeat performance driving her way to sixth once again in the Sunday Final. Jimenez recorded his best finish, just shy of the top-10 in 12th as Formal recorded a DNF. 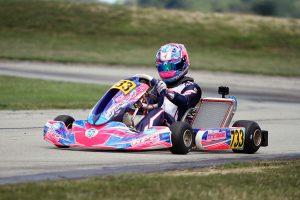 KA100 Senior was the biggest field on the weekend with 43 entries, with six of them under the RPG tent aboard Kosmic machines. On Saturday, Cedrick Lupien would lead the charge setting a time good enough for fifth in qualifying, with teammate, Caleb Shrader starting behind him in seventh. Lupien would start strong, getting up to third, to only be shuffled down the field late in the race down to 13th. Shrader finished ninth after a hectic first heat of the weekend. Both recovered spots in Saturday’s Final with Shrader in eighth and Lupien in ninth. Sunday again saw Lupien lead the way for RPG, qualifying seventh. After a rough day in the mid-pack, Gia Cicero was able to break out on Sunday and barely missed out on the top 10 in qualifying. In the hotly contested Prefinal, Lupien would advance on his spot from qualifying and finish sixth. Cicero would fall back five spots while Shrader had a mini come back drive making up spots from 17th on the grid to finish 12th. In the Final, it was a six-way battle for the final step on the podium. Lupien held onto the podium places for as long as he could but would ultimately finish the day in fourth. Cicero would make it into the top 10, finishing in 10th, bettering her Saturday result of 29th. Shrader was bounced back to 17th as Zak Meyer, Kieran Rogers and Jack Doyle all left New Castle with more to be desired after a difficult weekend in the constant mid-pack battles. Rogers had a best finish of 20th on Sunday, but didn’t finish the final on Saturday. Doyle got up to 22nd on Sunday and 30th on Saturday. Meyer showed pace during qualifying on Saturday but wasn’t able to show it in the races, ending up 23th and 28th in both finals. 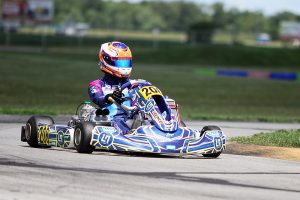 The Rolison Performance Group hauler now heads back home to Oregon for a chance to regroup after a busy month of July on the road. The team is setting up for a Driver Training program the week of August 19-25 near their homebase before setting up to head on the road for the United States Pro Kart Series Hoosier State Grand Prix, scheduled for September 15-18 at the New Castle Motorsports Park in Indiana.