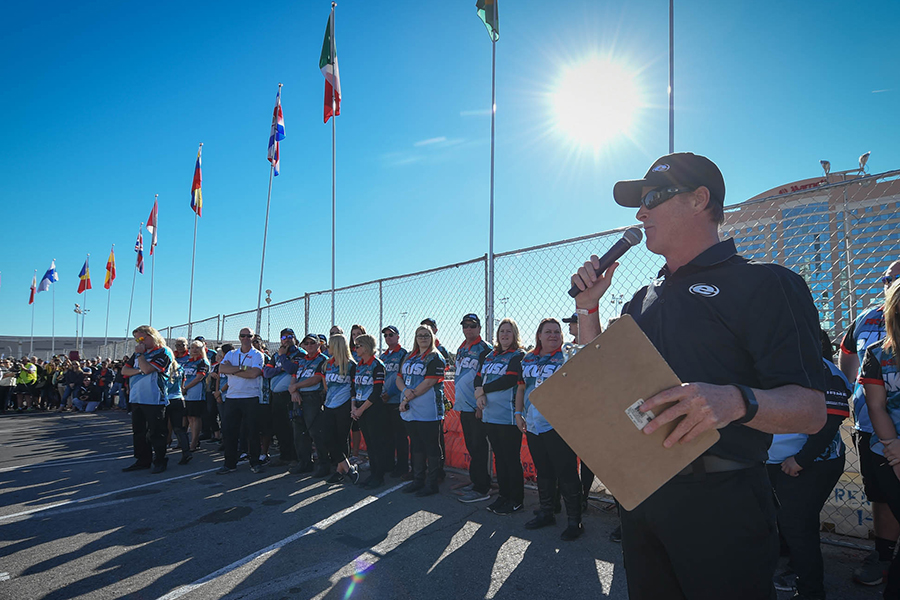 In November, I’ll attend and work my 25th Superkarts! USA SuperNationals. During the first two years of the event, I helped out on the microphone, before taking over the show fully in 1999. For over two decades, I’ve had the honor of calling the action of the greatest karting event in the world. As I’ve written about on numerous occasions, the SuperNationals are my ‘Christmas’. 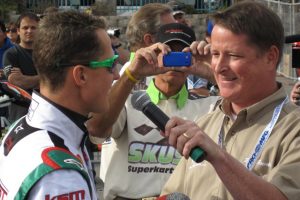 Howden has seen and called it all, including interviewing Formula 1 great Michael Schumacher in 2009 (Photo: On Track Promotions – otp.ca)

Over the years, I’ve said that the only downfall with being the ‘voice’ of the event was not being able to actually experience the SuperNats as a driver. Well, that’s going to change. This year, I’ve decided that it’s time to pull double-duty, adding a competition component to my commentary. I’m going to race KA100 Master in the 2022 SKUSA SuperNationals.

Actually, it was David Cole’s idea. When SKUSA announced the inclusion of the KA100 Master class, David messaged me and said “this is your chance, you should run”. I thought about it for a second, batted around the idea, and agreed. This was my chance. The 25th edition. The right category. I’m not getting any younger. This is the right time.

Actually, racing in the SuperNationals is something that I’ve thrown around for years. I’ve announced and raced at the same event many times, including the 2013 ASN Canadian National Karting Championships, many years at the Rock Island Grand Prix and, most recently, in 100cc Masters at the Challenge of the Americas in Sonoma and 206 Masters at the Texas ProKart Challenge event in Amarillo in 2019. I love the opportunity of experiencing the track in between commentary calls. It adds a new level to it for me. I don’t have to question the track and grip conditions; I’m experiencing them myself.

I’ve been a kart racer since 1995, and last season was the first time in 26 years that I didn’t participate in even one race. That realization was disappointing. Every year, I find a way to run something. Often times it’s a home race at the Waterloo Regional Kart Club, or maybe just a last-minute offer like the COTA and TPKC races mentioned above. Other races I’ve targeted directly to cross off my personal bucket list. I’ve been extremely fortunate to compete in many of the biggest races in American karting. I’ve hit the streets at both the Rock Island Grand Prix and Quincy Grand Prix, I ran the full Superkarts! USA Florida Winter Tour in 2000, made the Sr. Champ and Star Champ mains at the WKA Daytona Kartweek Dirt World Championship and Stock Heavy at the Tulsa Shootout, felt the excitement of the Cup Karts North America Grand Nationals, and had the chance to race on the hallowed grounds of the Indianapolis Motor Speedway in the USAC Battle at the Brickyard. The SuperNats remains unchecked. 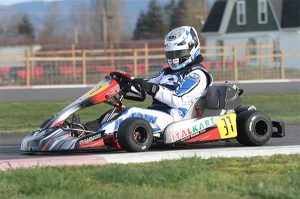 As a kart racer since 1995, Howden will make his first start as a driver at the SuperNationals in KA100 Master (Photo: EKN)

I’ll be developing a great deal of editorial around this effort. Physically, I’m good to go for a Briggs event, but I need to fire up a training regime to get in the kind of shape I’ll want for the SuperNationals. I’m going to need to lose at least 20 pounds and get much more fit than I am right now. I have 15 weeks to dial myself into race shape, so this program has already started. I’ll need to get in the seat of a kart as much as I can, and I’m already making plans to hit the track. I’ll be racing at the CKNA Grand Nationals at New Castle on the first weekend of October, so that’s a great midway point to check where I am.

Team-wise, if you had a chance to do a one-off event with a team, who would it be? There are so many top-quality operations in the sport these days, but I’ll be honest, I want to get a look at the inner workings of the Rolison Performance Group. What makes these guys so successful? Who are the key players under the tent and in the debriefs. I approached Mike Rolison just over a week ago, and he was very intrigued. A seat at RPG for the SuperNats is a tough ticket to get, but I’m thankful that Mike agreed to come on-board for this experience. His expectations are high, and he’s already joked about wanting to be updated my fitness progress. At least, I think he was joking.

There are so many great layers to this project. I’ve never driven an OTK product in competition, so this will be a first. I’m in need of a good kick in the ass health-wise, to get back to where I was in 2015 when I dropped 20 pounds to get down to 180, so that may be the true prize in all of this. When the final race is run on SuperSunday, and I’m sitting back with a beer in the paddock, I aim to do so as a SuperNationals entrant. To me, after 25 years on the PA, this will take my experience as part of the event to the next level.

I’m nervous, but excited. I’m motivated to be ready to have a truly successful experience. Superkarts! USA has offered up the KA100 Master class to the community, but they need to see 25 pre-entries by August 21. That’s three weeks. Master racers, let’s do this. I mentioned my plans in secret to a few guys this past weekend at the SummerNats, and they’re already on-board.

This is the year. This is my shot. This…is my ‘double-duty’.