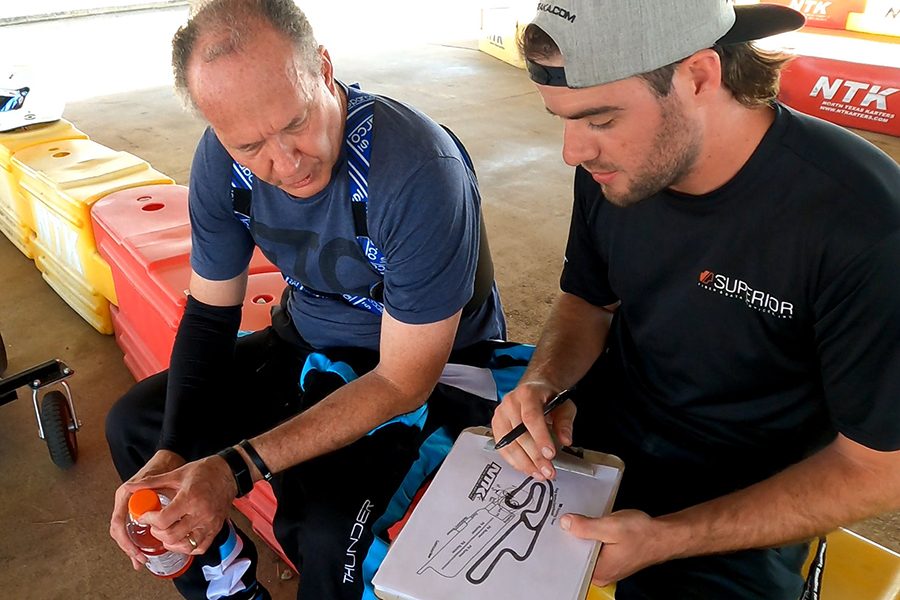 The following is a continuing series ‘Begin Again’ by R.K. Siler. The last installment was the first of the 2022 season with The Makeover – Part I and today, we provide you with Part II.

In Part I of “The Makeover”, I discussed the big changes that were made to my shifter kart, including the installation of a new ROK Shifter engine and a complete reset of my chassis settings back to a more neutral set up.  The result is a more driveable and competitive kart, but as I mentioned in Part I, it’s clear that the next big gains in lap time would be coming from me, the driver. 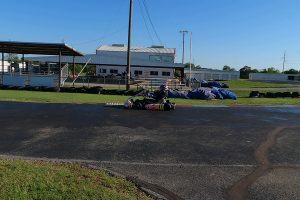 Now, before I go any further, if I am going to be fully transparent, I have a healthy ego.  I usually do a good enough job of keeping that ego in check, but it’s tough for me to ask for help on something like improving my driving.  I mean, I won a Formula Ford championship in 1989, why should I need any help?  Just to make matters a bit worse, I did some driver coaching decades ago and found myself working with some truly pompous “gentlemen drivers” (these guys were real chest-beaters) who were just impossible to deal with.  I always tried to be respectful with those guys, but in the back of my mind I was always thinking thoughts like, “Dude, you ain’t quick and you’re never going to drive for Ferrari, so save your money and stop!”  So, yes, I had some misgivings about hiring a driving coach.

Mind you, Mike Jones at the Dallas Karting Complex had coached me a bit and Mike definitely helped me, and my buddy Jack McLemore spent a lot of time offering tips and advice, which also helped.  But in the back of my mind, I knew that there is just no substitute in getting a coach who is standing on the track and watching me drive, looking at my data, and correcting the bad techniques or habits that I was using.  As luck would have it, I am friends with Jake French on Facebook, and he made a post saying that he was available on weeknights for coaching at North Texas Kartways (NTK).  Great!  Full of enthusiasm, I quickly messaged Jake and booked two sessions with him.

On the appointed day for my first coaching session, I wrapped up work, packed up my kart and headed out to NTK to meet Jake.  It was on the drive to the track that my ego kicked in and with that, so did some of my insecurities.  Top of mind is that Jake is a former SKUSA Pro Tour Champion and has been one of top two or three shifter kart pilots for the better part of a decade.  Suddenly, the shoe was on the other foot – I was now the gentlemen driver being coached by the ace.  The closer I got to the track, the more I started thinking things like, “Since you really are a miserable wanker, for goodness’ sake, at least try to be coachable!” 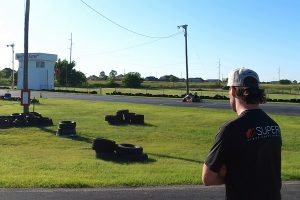 Now, the good news for me is that Jake coaches karters all the time as part of his role with PSL Karting, where he is both a team driver and in-house driving coach, so he has helped drivers of all skill levels, and intellectually, I knew that, but emotionally, that little voice inside me was having a field day.  Jake asked me to first drive a few laps so he could watch me, then he pulled me off the track and with me in still in my kart, the coaching began.

“Did you ever drive formula cars?” he asked.

“Yeah, I thought so.  You have some good old habits that need to be broken and replaced by good new habits,” he said.  “From now on, no more blipping the throttle on your downshifts. And for your upshifts, instead of lifting all the way off the throttle, I want you to barely lift off the pedal and just go to the next gear.  What’s happening is that you are letting off the gas pedal too much, so the revs are dropping so much that you’re falling below the power band, and that is killing you on acceleration.”

And he sent me right back out again to practice just those two things.

Eliminating blipping the throttle on downshifts was very quickly dealt with, but the upshifts, for me, were quite difficult for some reason.  Multiple times per lap, I would slightly back out of the throttle, grab the next gear and immediately go back to full throttle, only to discover that I had found neutral as I over-revved the engine to roughly the Moon and back.  But…when I got it right, it felt right, and it was very satisfying, and you could see the impact of that one change on my data because my straight-line speed went up a couple of miles per hour when I got it right.

By this time, I had pounded out quite a few laps, so between the Texas heat and the exertion of driving a shifter kart, I was getting tired and starting to make mistakes.  Jake wisely called me into the pits (which has a huge awning that provides some much-needed shade) and told me to grab a Gatorade and catch my breath.  We then sat down on some TechPro barriers and reviewed the track map for NTK, with Jake telling me which gears to be in for each corner, and then we began talking about braking technique and roll speed.

Jake began by saying, “Your lines through the corners are fine, I can’t really help you too much there.”  I thought to myself – at least I’m doing something right.

Jake continued, “I’m going to put a traffic cone on the spot where you are braking for Turn 3 (this is a tight right-handed hairpin turn), and I want you to hit the brakes hard and then release them quickly right at the cone.  And then I am going to move the cone closer to the turn during the next few laps.  Don’t worry about anything else, take it easy in the rest of the corners, just work on this one drill in one corner.” 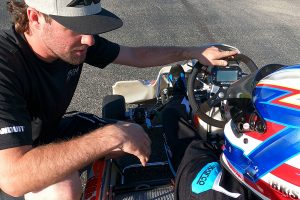 A quick discussion between laps with French and Siler

Sure enough, as I began to work towards bettering the braking technique that Jake was moving me towards (and away from the technique that I had developed when I was driving Formula Fords), that traffic cone began getting closer and closer to turn 3.  “Jake, you gotta be frickin’ kidding me!” I thought as I darn near screamed off and missed the turn.  Jake motioned for me to pull over on the side of the track.

“OK, you’re doing great!” he began.  I was glad that at least one of us thought I was doing good, because to me, it felt horribly unnatural.  “What I want you to try now is to brake in the same place that you’re braking at now, but I want you to release the brake quicker.  Sort of like, if you are on the brakes for a second and then releasing them, just get on the brakes for half a second and release them.”  He consulted my MyChron data for a minute, and then said, “Yeah, see, you’re entering Turn 3 at around 22 miles an hour, I want you to try to come in at around 30 miles an hour.”

“Yep.  I go in faster than that, so I have every confidence you can do it,” he said with a smile.

Wow!  My analytical brain quickly figured out that Jake was asking me to improve my corner entry speed by roughly 40%…but, Jake said he “had every confidence in me that I could do it”, so I guess I could.  And, you know what?  I did it!  Jake explained later that by driving into the corner harder, I was making the chassis work for me and honestly, while it took a leap of faith to do what Jake asked me to do, it was actually easier to drive the kart around that corner. 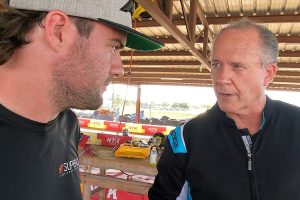 A final debrief on the day

By this time, I was absolutely exhausted, and we both had to get home for dinner, so we shut it down for the evening.  The following week, Jake and I met at the track again, and all we did was work on perfecting the techniques that had been taught in the first session.   I was feeling good about myself until I realized that the guys hanging out with Jake that evening were Jake’s Dad Mark, 2019 FIA Karting KZ World Champion Marijn Kremers and multi-time Challenge of the Americas and Pro Tour winner Hunter Pickett, so no matter how well I did on track, with those three watching me, the pressure was inevitably on.  All I could think was, “Please God, don’t let me be a complete wanker…help me be merely a wanker tonight!”

I for sure will be working with Jake, our crazy schedules permitting, in the months to come.  I have learned that if I can check my ego at the gate when I come into the track, a great coach like Jake will definitely make a big difference in my on-track performance.  How much of a difference?  Well, in my first race after having my two sessions with Jake, I went from running at the back of the pack to heading up the mid-field, being less than 1 second off the pace of the leaders.  Hiring a driving coach probably saved me at least 6 months of trying to figure it out on my own.  Of the lessons learned, the biggest was probably how and when to apply the brakes, and just as importantly, how and when to release them.  The greatest time gains for me, at this point, is in learning how to use the brakes.

I highly encourage you to consider the use of a driving coach if you can find the right one; by that I mean that the two of you have to speak the same language to communicate effectively, something that Jake and I were able to achieve very quickly.  And for you guys that drive on the PSL Karting team, I hope you know how fortunate you are to have somebody like Jake looking over your data and coaching you up!