Tony Kart Wins the First Round of the WSK Euro Series 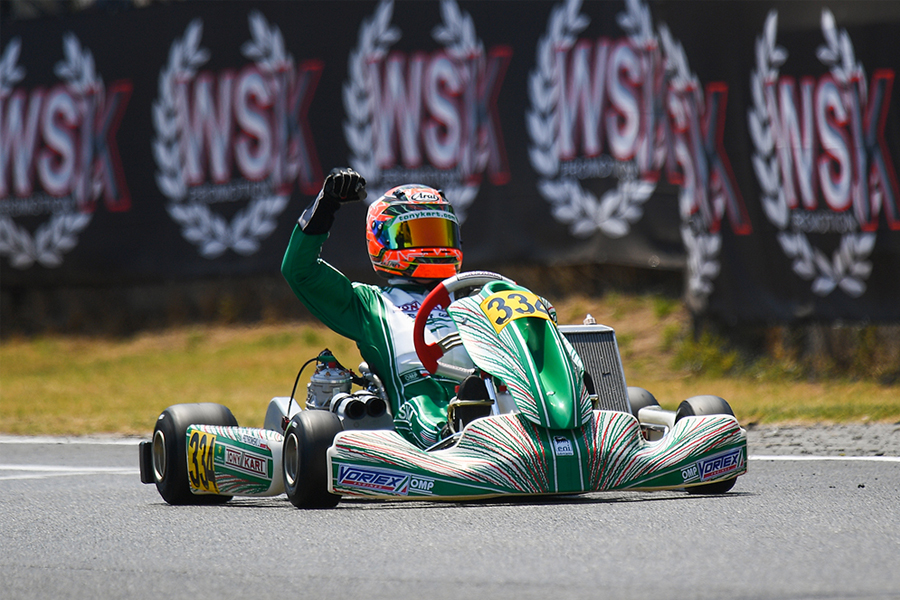 At the South Garda Karting of Lonato, on the occasion of the first of the two championship stages, our Tony Kart Racer 401 RR dominates the OKJ final with Jan Przyrowski and takes the lead in the overall ranking.

The WSK Euro Series of our Tony Kart Racing Team starts in the best way. In the first round of the championship, at the South Garda Karting in Lonato, the Tony Kart Racer 401 RR, paired with the Vortex DJT engine signed by OTK Kart Group, double wins in OKJ after the previous success in the FIA Karting European Championship in Franciacorta. The Racing Team’s attendance is reduced, on the other hand, in the OK categories, still with the “401 RR” chassis and the DST engine by Vortex, and in the MINI category, with the Tony Kart Rookieand the MCX engine by Vortex, as well.

In OKJ, Jan Przyrowski comes to Lonato on the strength of his first success in the FIA Karting European Championship obtained just seven days before. The Pole starts quietly in the qualifyings, but during the qualifying heat he scores three victories, a second place and three fastest laps, enough to launch him into third position in the intermediate ranking. However, Przyrowski is not content with these results and, on Sunday, he does even better: first he wins the A pre-final and then is leader since the pole to the chequered flag in the final. In the championship, Przyrowski is now on top with 88 points, +41 from the second driver in the standings: an important advantage in view of the last and decisive round at Sarno.
Uphill weekend for Enzo Tarnvanichkul. After having been one of the main players in the European Championship at Franciacorta, the Thai driver cannot find the same rhythm in the eliminatory heats, but in the A pre-final he gains a precious fourth place, reaching the Top 15 in the final, although he later receives a 5-second penalty for his front spoiler in the wrong position.

Two other Racing Team drivers also show off their skills in the final: Alp Hasan Aksoy confirms the growth he had made during the season with a very good performance in the qualifying heats, while Jimmy Helias is our fourth best driver. On the other hand, bad luck stops Maria Germano Neto just at the very best: the Portuguese driver confirms her sprinting skills in qualifyings with a positive sixth place in her group, but an accident in the eliminatory heats and the consequent injury put a premature end to her weekend.

In the OK class, our drivers are Keanu Al Azhari and Liu Ruiqi, who are on the Italian circuit to further refine their driving skill in relation to such a competitive category as the ‘Senior’. Al Azhari takes a place in the top tem at the end of the three eliminatory heats and the pre-final, but the tussle in the first laps of the final prevents him from finishing the weekend in the best possible way. On the other hand, Ruiqi shows off in the qualifying heats and in the pre-final with several comebacks, coming close to the Top 15 in the final.

In the MINI category, the newcomer Ludovico Mazzola and Ethan Lennon put themselves on the line in a category with a total of 110 entries. Despite the interesting performances shown throughout the competition, our two young drivers do not reach the final on Sunday.

Tony Kart Racing Team’s season continues in two weeks (July 28th-31st), with the second and final round of the WSK Euro Series at the International Naples Circuit in Sarno, again for the OK, OKJ and MINI classes.