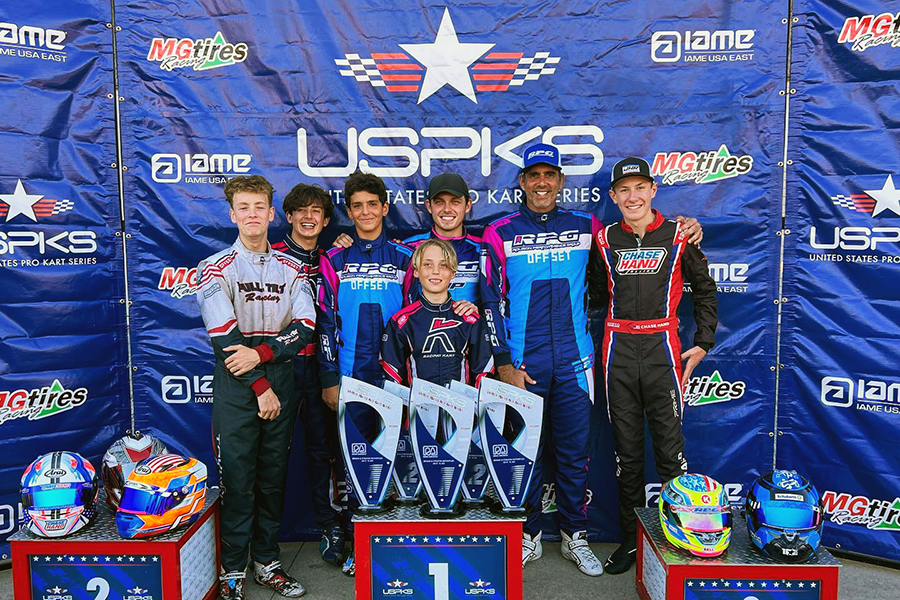 The Rolison Performance Group trekked to Wisconsin from their west coast home to return on the eastern half of the country as they begin the second half of the season. First on the docket was the United States Pro Kart Series Badger State Grand Prix, held over July 7-10 weekend from the Briggs & Stratton Motorplex at Road America. The Elkhart Lake, Wisconsin facility hosted Rounds Five and Six of the championship program, with 24 RPG-prepared Kosmic machines competing in the seven different IAME categories. In total, drivers under the Rolison Performance Group tent grabbed solid hardware, including 12 podium finishes and six victories. Leading the way for RPG was Caleb Gafrarar picking up three of the four wins in Junior competition as Ryan Norberg extended his USPKS X30 Pro win streak to six and Mario Barrios secured his first victory of the season in X30 Masters. 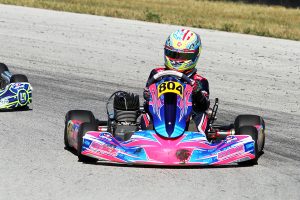 KA100 Junior saw 45 drivers compete with four of them representing RPG. Ernesto Rivera led the team in qualifying, where he secured fourth on the grid with teammate Caleb Gafrarar not far behind in eighth. Rivera would hold onto his fourth place at the line in the Prefinal, while Gafrarar made up one spot for seventh. Max Taylor, who started 12th, made his way up to sixth to put him in contention for the Final. Gafrarar would show off his raw talent and speed in the Final to win for the first time in 2022 in the category. Rivera and Taylor continued their fight toward the front, finishing in the top-10. Gafrarar continued to lead the way on Sunday, setting fast time in qualifying and winning the Prefinal. He made it a clean sweep on the weekend, taking the victory for his second on the weekend despite falling back to fifth mid-race. Rivera would join him on the podium as he fought his way forward up to third for his first podium result in the category after qualifying down in 14th. Taylor ended the Sunday action in 13th. Diego Mendeztorres fought hard all weekend in his RPG debut at USPKS ending up with a best finish of 26th over the two rounds of racing.

In X30 Pro Junior, six drivers flew the Rolison Performance Group flag, competing in the 24-kart-strong junior category. On Saturday, the RPG group would be led by Caleb Gafrarar in qualifying, as he secured third alongside teammate, Teddy Musella. Gafrarar would go on to win the Prefinal, with Musella close behind in third. Come the Final, Gafrarar would hit trouble and be sent to the back of the field, able to work back into the top-10 by the checkered flag. Ernesto Rivera would lead the charge for RPG, battling for the win but coming home in second for his career best USPKS finish. Max Taylor followed through to land on the podium in his first USPKS outing with RPG in the third spot. A pushback bumper penalty took Musella off the podium, placing fourth. On Sunday, Gafrarar would again lead the charge in qualifying, ending the session in second. After a tough Prefinal for all six RPG drivers, Gafrarar charged through the front pack to take the victory for his third of the season. Taylor added another top-five finish on the weekend, placing fourth with Musella leading early in the race only to finish sixth. Emma-Kate Scarbrough ended up 14th to both days to match her best results in only her second USPKS start in the category. Javier Herrera made his USPKS debut on the weekend, finishing 21st and 16th on the weekend. 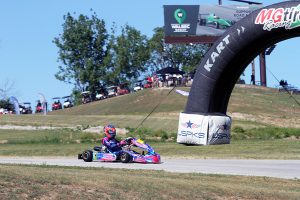 Ryan Norberg made it six for six on the season, taking double victory in the X30 Pro category. Norberg took both fast time awards in qualifying during the weekend and won both Prefinals as well. On Saturday, fellow RPG drivers Hayden Jones and Paul Bocuse both qualified in the top five, ending the session in third and fourth. Bocuse would hold onto third in the Prefinal and Jones would fall back to seventh. In the Final, Jones would fight back up to fourth, but Bocuse would hit trouble in the opening laps that sent him down the order. Sunday began with Bocuse, Jones and Wes Duchak all within the top-11. Jones improved his pace from Saturday and was among those in the early battles in both the Prefinal and Final, securing another fourth place result to close out his best weekend of the season. Bocuse ended up in the 11th position while Duchak retired early, unable to better his 20th place result on Saturday. 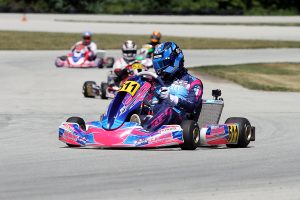 Mario Barrios put in a championship-like performance on Saturday in the X30 Masters category. Barrios set fast time in Saturday qualifying and was able to secure the win in the Prefinal. From there, he led wire-to-wire in the Final to claim his first victory of the 2022 season at USPKS. Barrios struggled in qualifying on Sunday, however, found the pace in the Prefinal to come from 11th to the race win. After leading the early portion of the Final, a slight mistake in turn one sent him spinning around. He regrouped and drove back up to 10th. Danny Robertson carried the RPG flag in the Final on Sunday. A top-five contender all weekend, Robertson was able to drive to his first podium finish of the season, ending up on the third step to improve from a P10 on Saturday. S.H. Moon and Rob Maier would both achieve a best finish of 13th on the weekend after showing improving pace during practice days. 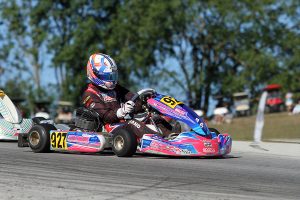 Hand remains well in the title hunt going into the finale
(Photo: EKN)

KA100 Senior was by far the largest field on the weekend at 55 karts with four drivers representing Rolison Performance Group. Gio Cicero led the charge in qualifying on Saturday, ending the session in 10th as teammate Chase Hand would end up 11th. Both drivers did exceptional in their heats, with Hand finishing sixth while earning fast lap in the ODD group and Cicero was fourth in the EVEN group. Hand had an incredible performance in the Final to go from 11th at the start to a hard fought third-place result, the first podium finish for the Senior rookie. Cicero started sixth but unfortunately was shuffled down the order, ending up 20th. Sunday it was Hand’s turn to shine in qualifying, ending up an impressive eighth overall before finishing fourth in his Prefinal. Cicero was 24th overall in qualifying and was able to fight up to 10th in the same Prefinal. The Final would not go in the favor for Hand, as he ran as high as sixth before retiring. Cicero fought her way up to 14th by the checkered flag to lead the RPG team. Grace Hemmerde and Rob Maier each missed the main even on Saturday and did not compete past the Prefinal on Sunday. 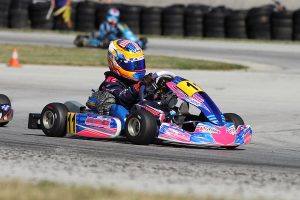 Gibson is currently second in the title hunt for Micro Swift
(Photo: EKN)

Jackson Gibson was the lone driver in the 33-driver Micro Swift catetory on the weekend. Issues in qualifying put him 11th on the grid for the Saturday Prefinal, where he came to life and advance up to take the win. From the pole position, Gibson fought for the victory each lap, eventually losing in a drag race to the checkered flag to end up second for fourth podium of the season. Issues plagued him on Sunday, unable to secure a fast lap in qualifying and retiring on the opening lap of the Prefinal. Gibson drove up to the 20th position in the Final.

In Mini Swift, Lillian Scarbrough would be the sole representative for RPG in an incredibly challenging class of 34 drivers. Scarbrough had a best qualifying performance of 28th for both days. On Saturday, she came back from a DNF in the Prefinal to finish 24th, making up six positions. She, unfortunately, hit more trouble in Sunday’s main event, dropping out on the first lap.

Following the success at Road America, the Rolison Performance Group operation now begins preparation for the final event of the Superkarts! USA Pro Tour. The 2022 SKUSA SummerNationals is scheduled for the July 28-31 weekend at the New Castle Motorsports Park in New Castle, Indiana. RPG is slatted to be at the New Castle facility the weekend prior, taking part in the track’s SummerNationals warm-up event to provide all RPG drivers the opportunity to be tested and prepared for the final two rounds of the Pro Tour.