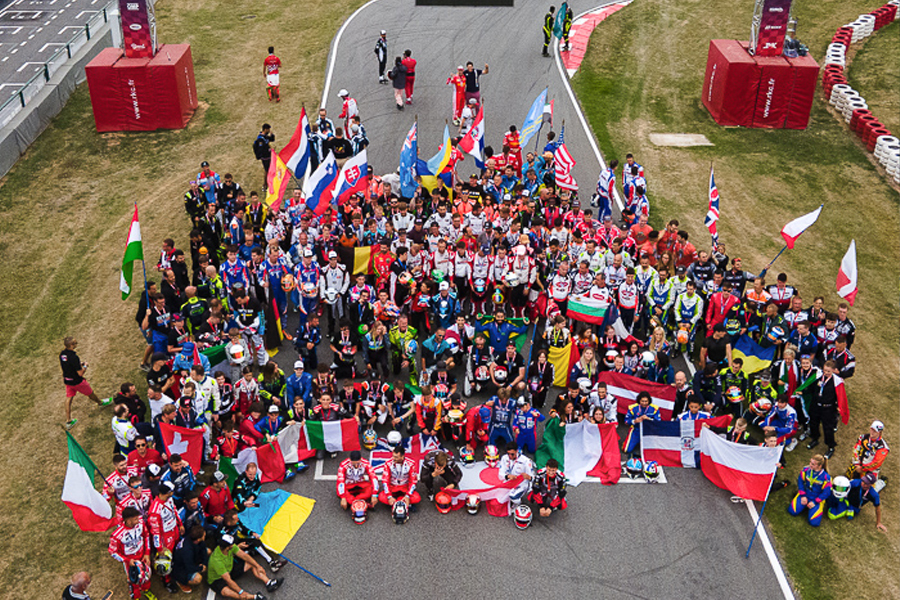 The second decade of the SWS International Finals opened with a very successful event near Paris on the exceptional site of the Racing Kart de Cormeilles, endorsed by Jean-Eric Vergne. More than 300 drivers from 44 nations, divided into five categories, were able to give free rein to their passion during four days of intense and fair competition.

The track of the RKC is perfectly adapted to the SWS leisure karts for the International Finals and alternates with great fluidity between fast and technical sections for the greatest enjoyment of the drivers. The sunny weather during the entire event meant we saw superb battles at all levels, the prize for combativeness going to the Juniors as it does every year.

The new rules adopted a format closer to that of high-level competition: Qualifying, Heats, Super Heats and Finals. Weight management was optimised to ensure greater fairness. The race control system managed by the WFR was used for the first time and provided irrefutable evidence to support the decisions of the stewards. Finally, the first Women’s Cup, in response to a strong demand, proved to be very interesting.

The organiser 3MK Events proved once again its mastery of the subject in perfect harmony with the very professional team of the RKC. The Sodi Rental equipment was at its best as always: performance was the order of the day in all categories, accompanied by a high level of reliability to maximise enjoyment for the competitors. For example, the Sodi RT 10s in the Endurance Cup did not encounter any technical problems during the 12-hour race, which covered more than 750 km at an extremely fast pace.

The 76 drivers of the Sprint Cup competed in a marathon of 32 races at the wheel of 125cc 2-stroke Rotax Junior Evo-powered Sodi Sport karts. Lucas Decobert (FRA – RKC Karting Paris) and Adam Szydlowski (POL – Gokart Arena Łódź) were neck-and-neck in Wednesday’s Qualifying, facing Andrejs Laipnieks (LVA – 333) then Damien Pointet (CHE – Karting de Vuiteboeuf). Decobert and Adam Szydlowski remained very close against the clock on Thursday, but Bastien Meunier (FRA – Karting Loisirs Neuilly) came next in the overall classification of the three heats. The positions remained the same on Friday in the cumulative ranking of the heats and Super Heats with Levente Szabó (SVK – Fibo Karting) in 4th place and Duke Melchior (DEU – Cool Runners Kart) in 5th. Meunier started in the lead in Final A, but Szydlowski took the lead on the second lap and then distanced his opponents. Decobert came back to 2nd position, but the gap to the leader reached 2,5”. Meunier progressively lost ground and finished 6th. After 20 laps, Szydlowski was 2″ ahead of Decobert, who set the fastest time. Szabó secured 3rd place by nearly 3”, followed by Martin Guérard (FRA – Sens Espaces Karting) and Laipnieks. Szydlowski, who was the leader last year until it started to rain, took a brilliant revenge this year.

DA CRUZ DOMINATES THE FIRST EDITION OF THE WOMEN’S CUP

KID CUP: KOSENINA AT THE FINISH

Oliwier Chłopek (POL – Cartmax) was at the front of the heats and proved his speed in Qualifying. Oscar Lambert (GBR – Dubai Autodrome) was 2nd ahead of Kotaro Asanuma (JPN – U-Kart Circuit), then Ben Yiangou (GBR – Brentwood Karting) and Patryk Gacka (POL – Canpol Racing). The standings after the Super Heats confirmed this hierarchy, but the Final would change the situation with its five different leaders. Asanuma and Chłopek first took turns in the lead, then Lambert led for 11 laps under pressure from Yiangou, leader for one lap. Meanwhile Nejc Kosenina (SVN – Karting Maribor) made a fantastic comeback from 7th position and overtook Yiangou in the last corner. The Kids were driving Sodi LR5 200cc 4-stroke Honda karts.

JUNIOR CUP: PEMOV MAKES THE DIFFERENCE IN THE FINAL

In the Junior Cup, three winners followed each other during the Qualifying Heats: Dario Pemov (BEL – Karting Eupen powered by Prokart), Raphaël Cauville (FRA – RKC Karting Paris) and Leon Schmied (AUT – Styria Karting), while Luca Corsi (ITA – Affi Kart Indoor) won the Super Heat. Pemov led the Final from start to finish under pressure from Kirill Martolog (UKR – Skymall Karting Kyiv) and Cauville. Pemov took advantage of the battle between his two pursuers to take the lead at the end of the race and win with more than 2,5” of a lead. Alberto Brentegani (ITA – Affi Kart Indoor) made a great comeback of eight places to finish 4th ahead of Noah Lanuza (FRA – Karting de Saintes). The Juniors were driving Sodi LR5 200cc 4-stroke Honda karts.

44 very international teams competed in the Endurance Cup at the wheel of the famous Sodi RT 10 with a Honda 390cc 4-stroke engine. There were some very experienced drivers in this particular discipline as well as some competition drivers for a high level event.

Saintes (FRA) took pole position in the Qualifying Practice based on the average of the four team members, ahead of Infinity (ITA) and Dammuso Dad & Son (ITA). The start of the 12-hour semi-night race was given at 10pm on Thursday. While the night was to be a bit cool, the stints followed one another at a good pace. Infinity and Saintes made their presence felt in the top three, as well as Kart & Diem Pro, Red Racing, Dammuso Dad & Son and PFV. Joker Team, who were quiet at the beginning of the race, were able to climb back up thanks to their great consistency and appeared at the top of the ranking at daybreak. Changes of leadership continued until the finish line which rewarded Joker Team’s consistency after 626 laps. Infinity followed on the same lap by 32”, then Kart & Diem Pro at 46”. The small gaps between the two teams showed the intensity of the racing. Saintes and PFV dropped back in part because of their penalties.

The winners of each category were rewarded with Bell helmets, the runners-up received Sodi suits, while gloves and Sparco boots were given to the 3rd-placed drivers.

The winning team in the Endurance Cup was offered entry to a 24-hour race, the 2nd to a 12-hour race and the 3rd to a 6-hour race.

All the drivers on the Final podiums were invited to attend the FIA Karting World Championship – KZ in Le Mans in early September as VIPs with Sodi.

A MEMORABLE EVENING AT THE LIDO

The very last performance of the Parisian Cabaret before it closes was reserved for the drivers and supporters of the SWS 2022 International Finals. This special attention was appreciated by all those present on the Champs-Élysées, aware that they were witnessing a historic evening. The prize-giving ceremony took place on stage at the end of the legendary Bluebell Girls show that made the Lido a legend.

Finally, the location of the 2023 SWS International Finals was announced in advance. The Slovakia Ring has been chosen to host the SWS flagship event in Slovakia next year in July.