Lemke returns to top while Norberg extends streak to five 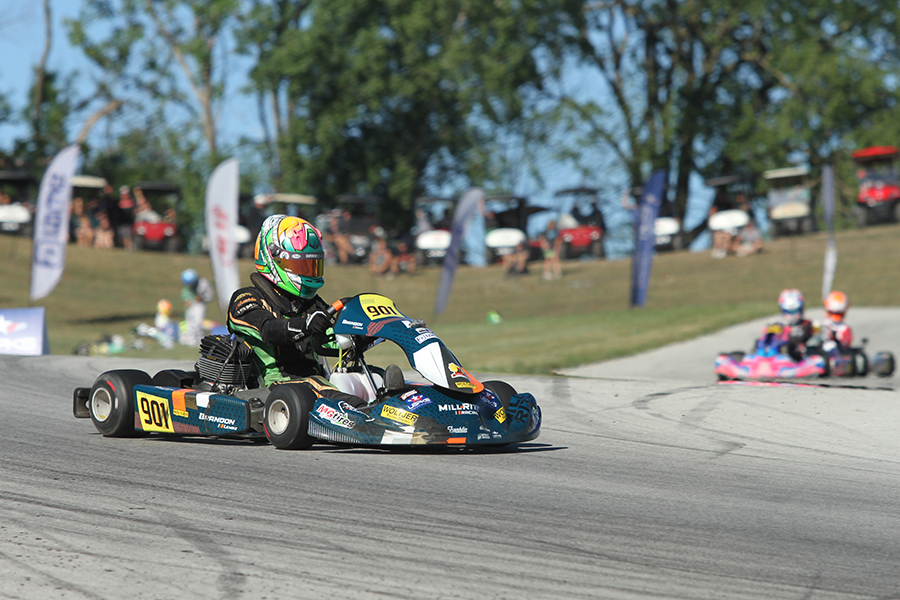 The second half of the 2022 United States Pro Kart Series kicked off on Saturday as Round Five of the championship program was contested in the first day of racing for the Badger State Grand Prix from the Briggs & Stratton Motorplex at Road America. A sunny day at the Elkhart Lake, Wisconsin facility welcomed some exciting racing throughout the seven different IAME divisions with familiar names coming away with victories in the main events to close out the day.

The last main event on the day was the Mike Doty Racing KA100 Senior division with former champion Brandon Lemke (FMS / Merlin) earning near maximum points on the day. After setting fast time in qualifying and winning his Prefinal, he was pushed out of the top spot by the other Prefinal winner Jeremy Fletcher (RPM / Tony Kart). They were joined at the front by Gavin Bayliff (TKG / Kart Republic), who started seventh. Lemke did not lead until lap 10 when he was provided a big lead after fighting for position with Fletcher and Bayliff. From there, Lemke put down consistent laps to keep the advantage for the remainder of the 22-lap race, earning his second victory of the season. The battle for second went down to the wire with Fletcher taking the position ahead of Chase Hand (RPG / Kosmic), who improved eight positions. Bayliff missed out on the podium in fourth with Race Liberante (Race Factory) ending up fifth after Alex Stanfield (GWR / Tony Kart) was penalized for contact, ending up eighth. 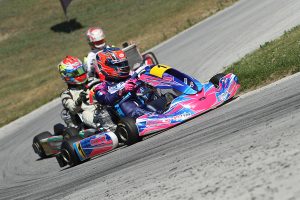 The Franklin Motorsports X30 Pro class was another sweep as well and near perfect day for defending champion Ryan Norberg (RPG / Kosmic). He had to fight for the win in the Prefinal and setting fast time in qualifying. He was shuffled back by Diego Contecha (Orsolon / Kart Republic) but eventually returned to the point and won the Prefinal. The Final was a wire-to-wire performance with Contecha and Marijn Kremers (PSL / Birel ART) on the hunt. They kept Norberg honest throughout the 26-lap race, however, were unable to attempt any pass. Norberg drove to his fifth straight victory with Contecha in second and Kremers provisionally in third. He would not make it through tech with a squish issue, thus handing the third step of the podium to Diego Ramos in his PSL Karting / Birel ART debut. Hayden Jones (RPG / Kosmic) was up three spots to fourth as was Austin Garrison (SCR / CRG) who posted fast lap of the race. 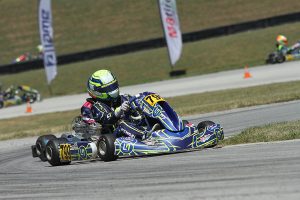 The Rolison Performance Group X30 Junior class welcomed a first-time winner on the season and for his career. Cameron Brinkman (MDR / LN) came away with the fast time in qualifying but saw two-time winner Caleb Gafrarar (RPG / Kosmic) run away with the Prefinal victory. Contact in turn 10 dropped Gafrarar to the tail of the field on lap two after leading the opening circuit. This handed the top spot to Teddy Musella (RPG / Kosmic) and Brinkman as they swapped for the position. Toward the end of the race, point leader Max Garcia (MPG / WPK) moved up into the lead. He held the spot through the final lap, running a defensive line. That was until the final corner when Brinkman made his move to the inside, and was able to get the run out of the corner to secure his first series victory. Garcia crossed the line in second, but a three-position penalty for contact with Musella dropped him to fifth. That moved Ernesto Rivera (RPG / Kosmic) to the second step of the podium and Max Taylor (RPG / Kosmic), up nine spots to third. Musella would have finished second, however a pushback bumper penalty put him fourth overall. Gafrarar, after going off a second time, drove up to reach the top-10 however a pushback bumper penalty dropped him to 12th in the final classification. 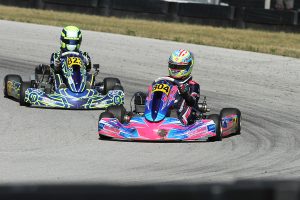 The fourth different winner on the season in KA100 Junior presented by Timmy Tech claimed the victory on the day. It looked to be Landon Skinner (GWR / Redspeed) as he set fast time in qualifying and was able to get away from the field in the Prefinal for the win. His run at the front only lasted two laps before he began to slip down through the field, eventually finishing 10th. The drivers at the front became Caleb Gafrarar (RPG / Kosmic) from seventh and Cameron Brinkman (MDR / LN) from third. They were able to get away from the rest of the field and establish a solid lead. Eventually, Helio Meza (IRM / Tony Kart) and Cooper Shipman (IRM / Tony Kart) locked up and were able to slowly creep in on the top two. By the white flag, they were there as Gafrarar and Brinkman had swap position multiple times. Gafrarar grabbed the lead on the final circuit, and with Meza and Shipman putting on the pressure to Brinkman, was able to get away in the final corners to drive to his first victory of the season in the category. Brinkman held on for second with Shipman earning the third spot ahead of Meza. Point leader Max Garcia (MPG / WPK) was alone in fifth. 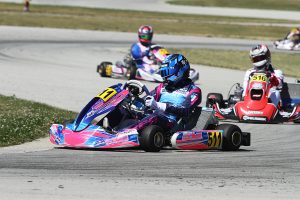 Perfect day for his first win on the season in X30 Masters for Mario Barrios (Photo: EKN)

Mario Barrios had his best performance of the season in the Speed Concepts Racing X30 Masters class, sweeping the action on the day for a perfect points performance. Barrios set fast time in qualifying and led all the laps in the Prefinal. With the pole position, Barrios took advantage in the Final, leading all 22 laps and recording fast lap of the race to earn his first victory of the season. Chris Wehrheim (Nash / CL) came up from seventh after he was involved in contact during the Prefinal to trail in second in his class debut. Championship leader Danillo Ramalho (REM / Kosmic) joined them on the podium in third. Scott Roberts (SCR / Redspeed) was fifth with two-time defending champion Scott Kopp (FMS / Exprit) rounding out the top-five. 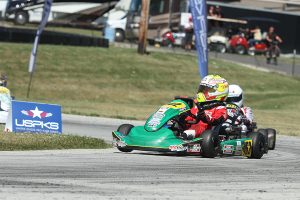 The most exciting race of the day was the DNJ International Services Mini Swift class the a large portion of the 34-driver field in the hunt at the end. The day began with Carson Weinberg (SCR / CRG) setting fast time in qualifying before finishing third behind Turner Brown (SCR / CRG) and Lucas Palacio (TKG / Kart Republic) in the Prefinal. Brown and Weinberg each led before Palacio took over the point just before the halfway mark. As the race progressed, championship leader Keelan Harvick (Harvick / Parolin) was moving his way forward along with Tyler Roberts (IRM / Parolin). Harvick took over the lead with four laps to go, and looked to be on his way to victory. Roberts however was able to put in a challenge on the final lap, and it brought a host of drivers into the mix through the final corners. Harvick and Roberts went back and forth through the remaining turns, with Harvick making the final move. As they came out of the corner, the pack was three-wide, and about three rows deep toward the checkered flag. At the line, Harvick scored the victory by 78 thousandths ahead of Palacio. Round One winner Salvador Della Vecchia (AKT / Energy) slipped his way through the wild few corners to be right there in third, landing on the podium. Weinberg came across in fourth with Roberts ending up fifth. All the top-nine who were right there at the finish came across the scales with no pushback bumper penalties. 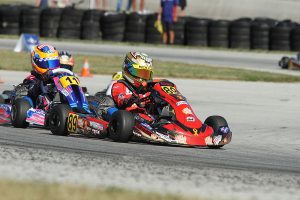 Three in a row for Ashton Woon as he claimed victory in Saturday’s Micro Swift Final (Photo: EKN)

For a third straight round, Ashton Woon came away with the victory in the Team Ferris Racing Micro Swift class. Woon (Nitro Kart) was second to Round Two winner Rocco Simone (Parolin USA) in qualifying but finished the Prefinal fifth as Jackson Gibson (RPG / Kosmic) charged up from 11th for the race win. It was Gibson and Woon that were able to get away from the field for the 20-lap main event. Gibson set the pace for the first 18 laps before Woon took over. That was the winning move as Gibson was unable to make an attempt to reclaim the top spot, as Woon went on to earn his third straight main event victory. Simone joined them on the podium in third with Troy Ferguson (Benik) fourth and Royce Vega (Benik) fifth, earning fast lap of the race.

Round Six of the 2022 United States Pro Kart Series is set to close out the Badger State Grand Prix on Sunday, with the final day of action from the Briggs & Stratton Motorplex at Road America.