The second half of the season for the 2022 United States Pro Kart Series is set to begin this weekend as the 10th season of the championship program continues. The Badger State Grand Prix will be contested on July 7-10 at the Briggs & Stratton Motorplex at Road America in Elkhart Lake, Wisconsin. This is the seventh straight event, dating back to the 2020 finale, where the series is welcoming over 200 entries. This weekend’s pre-entry total is at 227 with walk-ups expected on Thursday during at track registration. Thankfully, another perfect weekend of weather is forecasted for the fifth and sixth rounds of the 2022 program. 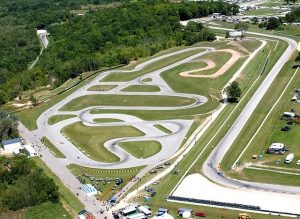 The newly renamed Briggs & Stratton Motorplex at Road America is one of the hidden gems of the sport in North America. The track is situated inside the famous 4-mile road course that is labeled ‘America’s National Park of Speed’. The Motorplex hosts an 8/10-mile circuit that is contested in the clockwise direction, featuring elevation changes throughout, including off-camber and banked corners. It was originally constructed in 2000 and was repaved at the end of 2017. This will be the third straight year USPKS has visited Road America.

What will be different about this weekend is the format reverting back to the original style after the opening two events of the year featured qualifying on Friday. Thursday and Friday will be practice only, with Fast Friday hosting five sessions. Qualifying is now moved to their respective days with Round Five on Saturday hosting warm-up, qualifying, Prefinals, Last Chance Qualifiers and Finals. Sunday for Round Six will have the same format with the KA100 Senior class the only scheduled to run split Prefinals and an LCQ. 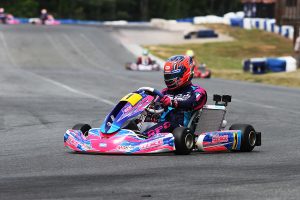 The story going into the weekend for the headline X30 Pro division is the winning streak of 2021 series champion Ryan Norberg (RPG / Kosmic). Including the first four rounds of the United States Pro Kart Series program and the recent SKUSA SpringNationals, Norberg is six for six in main events, which began in March at Orlando. He holds a 295-point lead over Pauly Massimino (RPM / Tony Kart), who has one podium finish after four rounds, a runner-up result in Round Three. The same for Cameron Weinberg (SCR / CRG), who is third in the standings and was second to Norberg in Round Four. Jack Jeffers (SCR / Redspeed) and 2019 FIA KZ World Champion Marijn Kremers (PSL / Birel ART) round out the top-five in the standings, all needing perfect weekends to put themselves closer to Norberg in the standings. Among the 28 drivers entered is Brazilian Diego Ramos, who is making his debut with PSL Karting aboard the Birel ART brand. Ramos ran X30 at Orlando and then KA100 at GoPro.

The KA100 Senior class is the largest of the event with 53 drivers already registered to compete over the two rounds at Road America. Alex Stanfield (GWR / Tony Kart) is the leader at the halfway point of the championship with two victories, one at Orlando and one at GoPro. He holds a 163-point advantage over former series champ and Round One winner Brandon Lemke (FMS / Merlin). Only one point back is Round Three victor Jeremy Fletcher, making his USPKS debut with Ryan Perry Motorsport. Stanfield and Fletcher each have two podium finishes while Lemke has just the lone victory to his podium trips. Anything can happen in this category with Chase Hand (RPG / Kosmic) and Aiden Levy (Harvick / Alonso Kart) sitting fourth and fifth in the title chase, along with the many drivers looking for victory on the weekend. One of them could be Diego Contecha (Orsolon / Tony Kart), making his class debut and running double duty on the weekend. That is just one of the stories that could develop throughout the event. 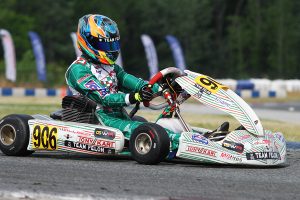 One driver is leading both Junior championships heading into the second half of the season. EKN Driver of the Month for May 2022 Max Garcia holds tight advantages in both the X30 Junior and KA100 Junior categories. Garcia (MPG / WPK) has yet to win in X30, however, his consistency at the front has him leading by 48 points over two-time winner Caleb Gafrarar (RPG / Kosmic) with two-time winner Ayden Ingratta (SCR / CRG) 87 points back. Sebastian Wheldon (JC / LN Racing Kart) and Jorge Ortiz (Supertune / Tony Kart) sit fourth and fifth, all within 200 points in the very competitive 22-driver category. The KA100 standings has Garcia with two victories and leading by 55 points ahead of Parker DeLong (RPM / Tony Kart). Recent TSRS race winner Cooper Shipman (IRM / Tony Kart) is third with Round three winner Helio Meza (IRM / Tony Kart) in fourth. Caleb Gafrarar (RPG / Kosmic) is fifth, over three hundred points back with Round Two winner Steven Miller (CDR / Kosmic) in sixth. The driver who is the most consistent over the second half of the season could come away with the championship, beginning at Road America against the 43-driver field. 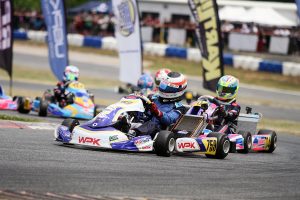 All seven of the categories at the USPKS has seen at least one driver win more than once on the season already. That driver in Mini Swift is last year’s Micro champ Keelan Harvick (Harvick / Parolin). The North Carolina driver defended his home turf at GoPro in May, and now is the championship leader by 129 points over Georgia’s Carson Weinberg (SCR / CRG). Asher Ochstein (Supertune / Tony Kart) is third with Round Two victor Tyler Roberts (Parolin USA) in fourth. Oliver Wheldon (JC / LN Racing Kart) completes the top five, just over 200 points out of the championship lead. Harvick is making a return to the USA from his first European trip to compete in Italy, hoping to extend his win streak against the 34 drivers entered on the weekend.

The two victories at GoPro Motorplex for Ashton Woon (Nitro Kart) put him on top of the championship standings at the halfway point in the Micro Swift chase. Jackson Gibson (RPG / Kosmic) has been consistent over the first four rounds, and only trails by 32 points with Round Two winner Rocco Simone (Parolin USA) a close third. 2022 Round One winner Marco Sammut (MDR / LN Racing Kart) is 161 points back in fourth with Benja Fernandez (TKG / Kart Republic) sitting fifth. Jaxon Porter made news prior to the event, joining Parolin USA with the Road America weekend his debut with the team and the chassis as one of the 34 drivers entered on the weekend.

Follow the coverage all weekend long on the EKN Social Media accounts for Facebook, Twitter and Instagram for news, updates, photos, videos and more, including the top-10 results after each session beginning with the final Fast Friday laps. Listen to the racing action by heading to the EKN Live page or tune in on the EKN Radio Network.