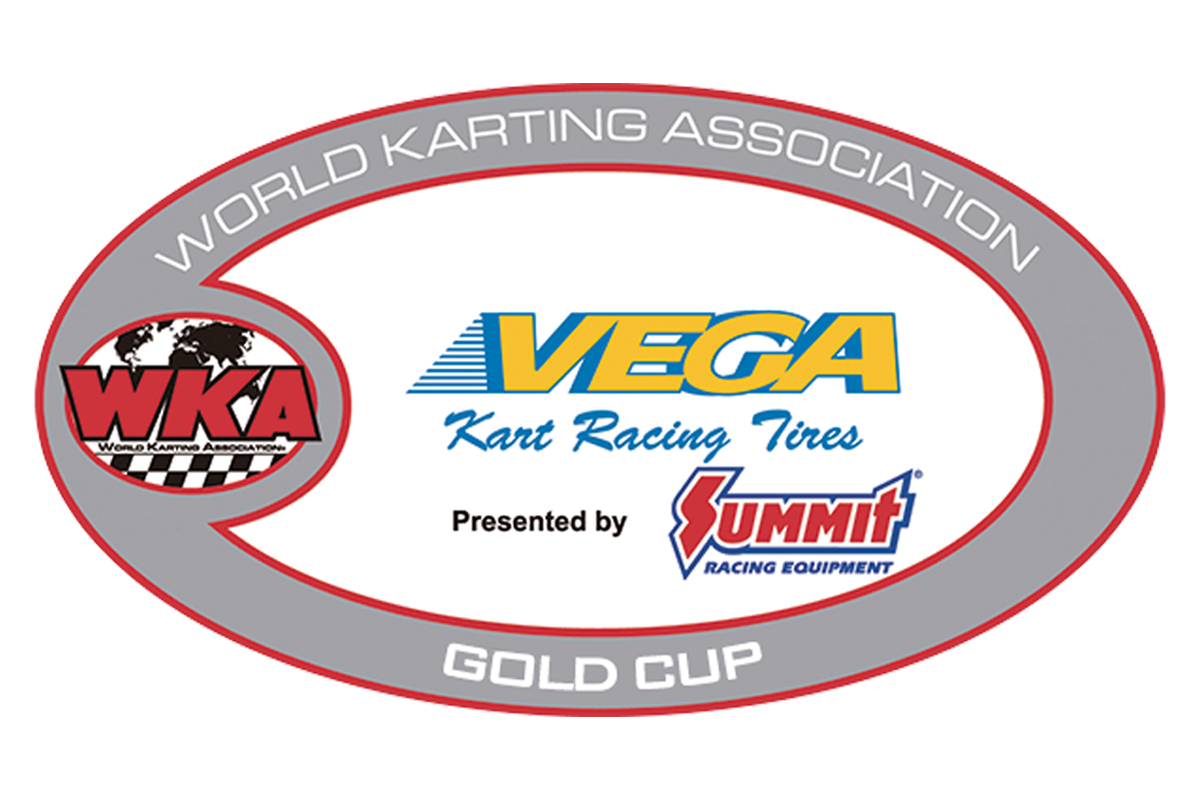 The World Karting Association reintroduced its once widely popular Vega Tire Gold Cup Series presented by Summit Racing Equipment for 4-cycle sprint June 24-26 at Charlotte Motor Speedway, where the North Carolina-based organization and its partners awarded racers with a fine prize package including $1,650 in cash, $1,200 in Summit Racing gift cards and another $2,000 worth of Summit Racing merchandise plus custom trophies for top-three finishers in each class and WKA medallions for pole award winners.

WKA has plans for similar awards packages at the second and third Gold Cup races of the year coming in September at Barnesville, Ga., and November at 103rd Street Sports Complex.

At Charlotte, on-track action opened Friday with a full day of Friday practice capped by a pair of special money races. New York native Mike Giessen, driving a Swann Mechanical-owned vintage kart, won the Ground Shaker Shootout for Briggs limited modifieds over Stevie Roberts, and Florida’s Elmer “Moe” Edmonson pocketed $500 for the win in the Kart Lounge 206 Senior Shootout elimination race, which saw the last two karts in the running order removed from the track after every 3-lap segment.

Edmonson and fellow Floridian Colin Warren were the last two drivers remaining after Zach Linsell and Ryan Bennett were removed. The two traded the lead a couple times in the final 3-lap shootout with Edmonson coming out on top. Warren won $200 for his efforts and Linsell was credited with P3 and the $100 award. Each of the top-three finishers also received trophy checks shown in the podium photo.

Saturday at Charlotte featured the first Gold Cup Series points racing since November 2016 at Carolina Motorsports Park, marking approximately five and a half years since the last race for the 4-cycle sprint series.

Inscoe would return a few classes later for the 206 Masters final, which saw him win his second race of the day in a close contest of North Carolina’s Tim Skinner. Chuck Watkins was third, Ed Weinstein fourth and Flip Davis rounded out the top five. Inscoe won the pole awards in both classes.

The father-son duo of Tyson and Tyler Swann were the drivers to beat Saturday in vintage competition. As was the case so many times over the last couple season in the Maxxis Sprint Series, Tyson and Tyler left the rest of the vintage fields to each score a win over the other in the two classes offered. Tyson opened the afternoon with a 0.195-second win over Tyler in Vintage Stock Heavy Final 1. Kenny Buff was third, Steve Lofton fourth and Robbie Davis fifth.

In the Junior Black main, Nichols followed Bridges and Klys across the finish stripe for third with Guerreiro taking fourth.

Luke Giglio and Justin Sherbert split the 206 Cadet main events. Sherbert won the first Cadet feature of the afternoon with a close victory over Giglio in Cadet Yellow. Giglio threw everything but the kitchen sink at Sherbert throughout the race but couldn’t find a way past the IONIC Edge Chassis racer. Giglio settled for P2 on his Birel with Lance Thigpen P3, Will Haire P4 and Ryan Hall P5.

Giglio broke into the win column later in the day in the Cadet Green final. The Alpharetta, Ga., racer pulled away from Sherbert in this one for a 7.2-second win. Thigpen was P3 for the second time on the day with Hall P4 and Haire P5.

In 206 senior racing, Zach Linsell scored his first feature win in about two years on his No. 115 MGM Chassis. The Pennsylvanian held off Moe Edmonson and Colin Warren to win 206 Senior 380#. Linsell led nearly all of the race until Warren passed him with a couple laps to go. Linsell quickly took back the lead coming to the white flag and held it to the checkered. Edmonson slid past Warren on the final lap for second with Warren having to settle for third. Collin Miller was fourth and Ryan Bennett fifth.

After barely missing out on wins in Friday’s 206 Senior Shootout and Saturday’s Senior 380# final, Warren was getting hungry when the 206 Senior 360# final rolled around as the final race Saturday afternoon.

Driving his familiar No. 211 TS Racing / VLR chassis, the Naples, Fla., veteran closed out the day with the Senior 360# final victory over Linsell, who again led the most laps in the contest. Warren made an inside move into turn 1 on Linsell on the white-flag lap. When Linsell slid high, Warren was able to open up a gap and hold it to the finish for a 0.316-second win. Linsell settled for P2 with Edmonson P3, Miller P4 and Noah Rivers rounding out the top five.

Gold Cup racers were back at it Sunday with another full racing program including morning practice, qualifying, pre-finals and finals to close out the weekend.

A handful of new racers were in attendance after prior commitments Friday and Saturday, and one of those was Chapel Hill, N.C.’s Todd Baron, who was on the west coast earlier in the weekend for a family wedding and landed back at Charlotte-Douglas Airport early Sunday morning to compete at Charlotte.

To no one’s surprise, Baron showed good speed right out of the box that catapulted him to a dominating win in 206 Super Masters by a 6-second margin over Saturday winner James Inscoe. Baron swept the class’s competition with the pole award, pre-final win and final victory. Steve Lofton followed Baron and Inscoe across the line for third, Stuart Keller was fourth and Darren Bray fifth.

Baron had to fight harder in 206 Masters with Inscoe, Tim Skinner, Kenny Buff and Ed Weinstein all running strong. Skinner won the pre-final and led early in the main before Baron went past and pulled away for a 3.5-second margin at the checkered. However, Baron’s No. 11 was issued an infraction in post-race tech due to his team changing chassis between the pre-final and final. The win was given to Skinner with Inscoe second, Weinstein third and Buff fourth.

Cadet racing was all Luke Giglio on Sunday. Riding his No. 68 Birel tuned by Mike Giessen, Giglio dominated both cadet classes all day with feature wins in Cadet Yellow and Cadet Green by large margins.

In Cadet Green, Giglio pulled out to a 13-plus-second advantage over Lanie Thigpen when the checkers waved after 10 laps. Georgia youngsters Ryan Hall and Will Haire took third and fourth with Maryland’s Sydney Miller rounding out the top five.

In Cadet Yellow, it was Giglio scoring his third final win of the weekend by a 6.2-second gap over Saturday winner Justin Sherbert. Thigpen was right behind Sherbert for P3, Hair P4 and Hall P5.

Giessen wasn’t only working on Giglio kart throughout the weekend, but he was doing some driving of his own. Tony Maynard made the call to Giessen to wheel one of Robbie Davis’ potent vintage karts, and Giessen gladly accepted. After winning Friday’s Ground Shaker Shootout with the Briggs limited modified power plant, Giessen drove the No. 75X Sunday with the Briggs flathead and proceeded to win the Vintage Stock Medium final with a last-lap pass on a strong running Kenny Buff.

Buff would have to settle for second by a close 0.320-second gap, denying the South Carolina racer of a win on the weekend; he was close several times. Tyson Swann was less than a half-second back of Giessen at the stripe for third. Chuck Watkins and Josh Loftin filled out the top five.

Earlier in the afternoon, Roberts Kart Shop owner Stevie Roberts drove the same Davis / Swann Mechanical No. 75X to victory in Vintage Stock Heavy. Roberts, who rarely races these days, finished P2 to Giessen in Friday’s Shootout and returned Sunday to add another feature win to his long list. He’d finish 1.2 seconds ahead of Tyson Swann for the victory with Buff third and Steve Loftin fourth.

Ronnie Kyls took a pair of Gold Cup win trophies back with him to Jacksonville.

Riding a No. 7 Coyote Zenith, Klys won both junior finals Sunday afternoon starting with Junior Black. Klys crossed the stripe P2 to Saturday double winner Peyton Bridges, but both Bridges and Christopher McKeithan were disqualified after the race for contact and unsportsmanlike conduct. Neither driver was allowed to start the later Junior Yellow final. Klys was credited with the Junior Black win over Nathan Guerreiro and Thomas Nichols.

Klys, who’d been close all weekend, took full advantage and backed up his Black win with a dominating drive in Junior Yellow, crossing the finish line more than 16 seconds ahead of fellow NFKC racer Nichols. Keith Labhart was P3.

Barrett Turley made it two-for-two in Kid Kart Sunday afternoon. Turley backed up his Saturday feature win with a Sunday triumph, this time by 0.262 seconds over Ryder Thompson, who gave Turley all he wanted to handle in the 8-lap final. Florida’s Blaise Hindrey was third.

Edmonson started main event competition in the win column with a 0.270-second win over his MGM Chassis teammate Linsell. Warren was third in this one with Collin Miller fourth and Noah Rivers fifth.

A potential $500 was on the line in the Sunday Senior Heavy final — $250 from WKA for the overall weekend win and an additional $250 cash prize posted by Kart Lounge for the Sunday race win.

Warren pushed Edmonson away from Linsell throughout the 10-lap affair and was able to separate the teammates. On the final lap Warren made his move with an inside pass in the left-hander at the end of the backstretch and that was all he needed. Moe wasn’t able to return the favor and Warren crossed the stripe a kart-length ahead for the $250 win plus netted the overall $250 award. In all, Warren would leave Charlotte with a cool $700 between Sunday’s awards and Friday’s P2 result in the 206 Senior Shootout.

Edmonson and Linsell both won some cash, as well, between Friday and Sunday. Moe settled for P2 in this one with Linsell P3, Miller P4 and Tyler Swann P5 of 10 starters.

Next up for the WKA Gold Cup is rounds three and four set for September 9-11 at the historic quarter-mile Lamar County Speedway in Barnesville, Ga.

Pre-registration and the event schedule will be posted soon. For all information on the Gold Cup Series, visit https://www.worldkarting.com/series/gold-cup/

For more information on the World Karting Association, please contact Mike Tetreault at Mike@worldkarting.com or by phone to 609.326.3741.