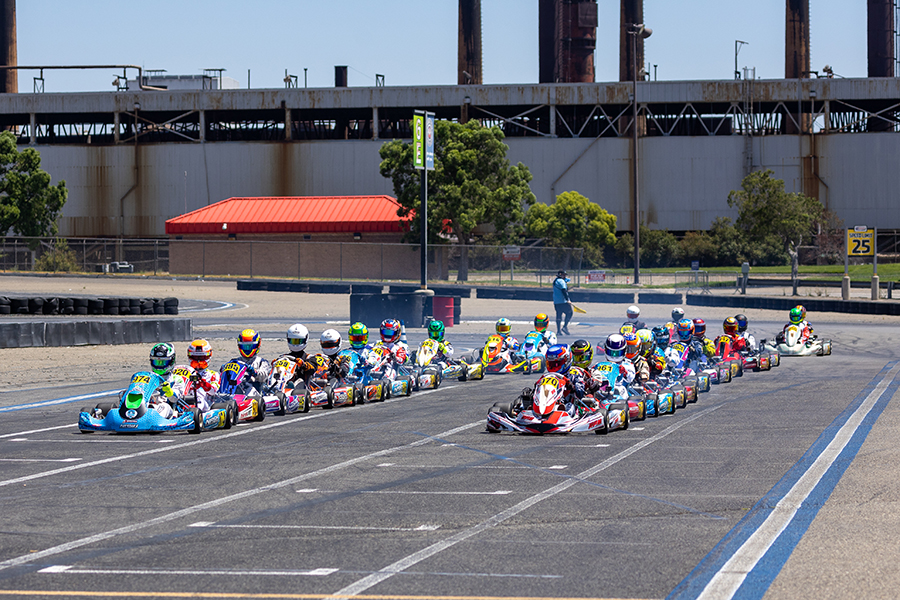 The California ProKart Challenge traveled to the CalSpeed Karting Center for the lone double-round weekend of the 2022 season. The June 24-26 event at the Fontana, California facility hosted Rounds Three and Four of the Superkarts! USA regional championship program. Hot California weather greeted the nearly 90 drivers to compete around the ’Sportivo’ layout, starting with a full day of practice on Friday before two full rounds of racing over Saturday and Sunday. In total, four drivers were able to secure double victories on the weekend. 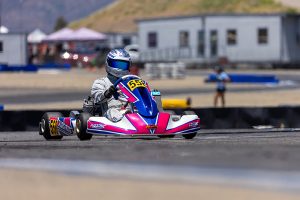 A complete sweep of the weekend went down in two categories – both in the elder divisions. Veteran driver Billy Cleavelin made his first starts of the season memorable with a sweep of the Leading Edge Motorsports X30 Master class. Cleavelin set fast time in qualifying both days, going on to win the Prefinal and Final in each round. Each victory was by double digits, with championship leader Robert Switzler second and Scott Nealon in third on Saturday. Sunday saw Tony Rossetti rebound from a DNF on Saturday to place runner-up, with Switzler placing third.

It was a similar story in the Mike Manning Karting KA100 Master, with Brett Harrelson in the leading role. Harrelson defended his home track with a perfect weekend performance in his 2022 series debut. He would go wire-to-wire on Saturday, earning maximum points for the victory ahead of Ronnie Swaim and Tim Meyer. It was a repeat for Harrelson on Sunday, leading every lap of the Prefinal and Final for the second victory of the season. Meyer progressed to second on Sunday, with championship leader Brian Phillipsen improving up to third from fourth on Saturday. 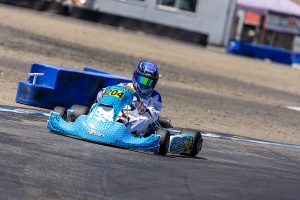 The Empire Karts Mini Swift class also saw one driver pick up the victory both rounds. Nixon Ellsworth was the driver to beat after setting fast time in qualifying. He was promoted to the win in the Prefinal after provisional winner Johnie Stamps was docked for a starting infraction. In the Final, Ellsworth led the opening few laps before Stamps took control. Stamps led the remainder of the race to claim his first victory of the season. Ellsworth trailed in second with Turner Brown driving to third. Bronson Koustas and Michael McGaughy completed the top-five. Sunday was Tristan Murphy at the front, setting fast time in qualifying and winning the battle in the Prefinal. After leading the first four laps, Murphy relinquished the lead to Stamps, who went on to lead the remaining laps for a second victory on the weekend. Murphy settled for second, with Ellsworth a close third. Brown and Ty Fisher ended up fourth and fifth.

Multi-time champion Billy Musgrave was able to triumph both days in the Factory Karts Pro Shifter class to add to his career total. Musgrave was able to claim the top spot in each round, including a 16-second margin of victory on Saturday followed by a six-second advantage in Sunday’s Final to claim his second and third wins on the season. Luca Bortone and Ayrton Hernandez stood on the podium with Musgrave on Saturday, with Bortone and Liam Jones claiming second and third on Sunday. Michael Guasch and Luis Quinones each took a victory on the weekend in Master Shifter. Guasch held off Quinones in the Final on Saturday, while Quinones outlasted Guasch on Sunday for the top spot on the podium. 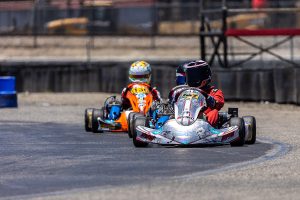 The HRT Driver Development KA100 Senior class was the largest of the event with 26 drivers competing. For much of the weekend, it was paced by Round Two winner Blake Nash. Setting fast time in qualifying, Nash went on to win the Prefinal to open up Saturday – after Billy Musgrave led the first few circuits. Nash then went on to lead all 24 laps of the Final to claim his second victory of the season. Round One winner Frankie Mossman set fast time in the race, driving up to the second spot. British driver Oliver Hodgson advanced one spot to third, dropping Musgrave off the podium in fourth while Jacob Hoover ended up fifth. Nash resumed his run at the front on Sunday, posting fast time in qualifying and coming out of the Prefinal with the win. He would lead for only two laps in the Final, however, before Mossman took control of the top spot. Mossman led the final 22 circuits to claim his second victory of the season, with Nash holding onto second. Hodgson repeated his podium result from Saturday, this time climbing up 12 positions to third. Dane Idelson drove to fourth with Aiden Kempf finishing fifth. 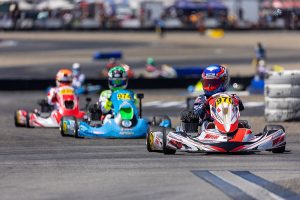 A second victory on the season for Frankie Mossman in the competitive KA100 Senior class (Photo: Spencer Russell – photosbysmr)

One of the more exciting categories throughout the weekend was the Nash Motorsportz KA100 Junior class – with multiple drivers in the fight each session. The top three in qualifying for Round Three were separated by 38 thousandths, with Round One winner William Rasmussen posting fast time to edge out Payton Westcott and Kane Martin. Sitting fourth was Keagan Kaminski, who drove to the win in the Prefinal. Kaminski set the pace early in the 24-lap Final until Martin took his turn at the point. While he was up front, recent Pro Tour winner Charlie Smith was advancing forward from his P6 starting spot. By lap 20, Smith was at the point and from there, led the remainder of the race for his first victory of the season. Alex Mercado followed him in second with Martin slipping to third. Alexander Gonzalez drove to fourth with Westcott finishing fifth. Rasmussen was quickest once again to open up Sunday’s action, holding the top spot through the Prefinal ahead of Martin. Getting the jump at the start of the Final, Martin was able to grab the lead and show the way for the entire 24-lap run to claim his first series victory. Rasmussen was a close second, with Smith up four spots to third. Kaminski ended up in fourth with Westcott completing the top-five. 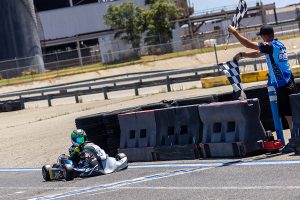 Each round on the weekend in the P1 Racing Engines Micro Swift class was a sweep. Round Three on Saturday was controlled by Julian Sanchez. After Sanchez set fast time in qualifying, he held off Round One victor Matthew Cagle for the win in the Prefinal. Round Two winner Troy Ferguson joined the fight in the Final, with he and Cagle each taking turns at the point. Sanchez fell to third on the opening laps but fought back to lead the only lap that matters, the final circuit. Sanchez secured his first victory of the season over Cagle and Ferguson. Daniel Ramirez and Nathan Ramirez completed the top-five. Ferguson took control on Sunday for Round Four, sweeping the action. Ferguson never relinquished the top spot, leading each lap in the Prefinal and Final for his second victory on the year. Cagle drove to second with Sanchez third. Miles Boertje advanced up to fourth with Nathan Ramirez finishing fifth.

The 2022 California ProKart Challenge resumes after a two-month break, traveling to the Santa Maria Kart Track on September 10-11 for Round Five. For more information on anything related to Superkarts! USA, please visit the website – www.superkartsusa.com and be sure to follow the Superkarts! USA Facebook page, Twitter and Instagram accounts.