Near record turnout at North Texas Kartways for midpoint of series 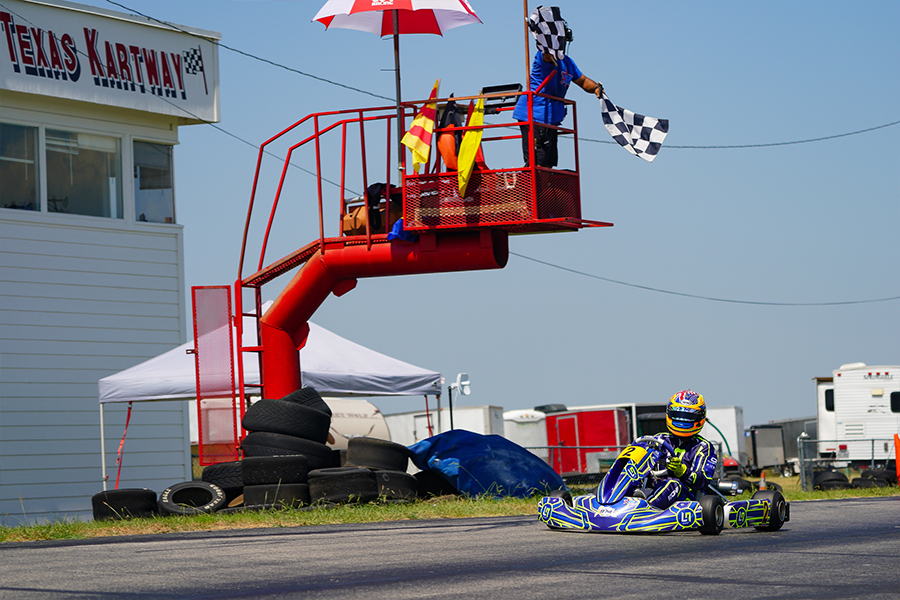 Round Three of the 2022 Texas Sprint Racing Series presented by Auctionetx was held at North Texas Karters facility in Denton, Texas. The halfway point of the season pulled 181 entries to the half-mile circuit for the ‘Summer Shootout’. The relatively small track conjured up some unique challenges for all drivers, creating extremely close and exciting racing throughout all nine classes. 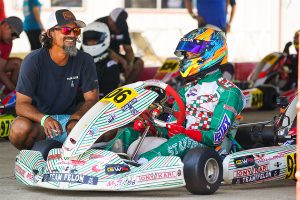 The biggest class by far on the weekend was the KA100 Senior by Exertech class. A total of 35 drivers battled over the two-day event, with a large field being broken into four groups after qualifying. Overall, Alex Stanfield went fastest in qualifying, with Nicholas Stouffer setting the second-fastest time between the two groups. In the AvsB heat, Stanfield set the fastest time and won by over five seconds to Aden Rudolph in second. In CvsD, Adrian Cruz took the win away from Drew Chappell, who started from the pole. In the AvsD heat, Cruz yet again took the win from starting second on the grid over top qualifier Stanfield. In BvsC, Peyton Phillips gained four positions throughout the race and set the fastest lap along the way to secure the win by one thousandth of a second over Rudolph in a spectacular photo finish. The Final began with Cruz spearheading the field until falling back to sixth. Stanfield took the lead on lap one and from there, led every lap until the checkered flag for his second victory of the season. Cruz ended up getting back to the sharp end of the field to end up in the runner-up position. Phillips made up six positions to get onto the podium in third. Brayden Robertson had a monumental drive to go from 15th to fourth with Vinnie Meskelis rounding out the top five. 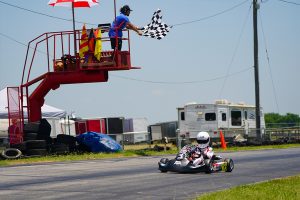 Tyler Roberts is the third different winner in Mini Swift on the season (Photo: Studio52.us)

Emmett Eddolls set the early pace in Mini Swift by Alan Rudolph Racing Academy with a commanding fast time in qualifying, clearing the field by over three tenths up on his closest rival Gage Bailey. Heat One saw Eddolls lose the lead off the start and later in the race retired, as third-place qualifier Tyler Roberts took over proceedings at the front. Halfway through the race, David Ybarra made the pass on Roberts for the lead, building up a two-second advantage for the win. After claiming the provisional win in Heat 2, Roberts led all 27 laps of the Final, driving away to a 2.7-second advantage over Bailey. Derek Wargo joined them on the podium in third with Eddolls rebounding to fourth while Ybarra placed fifth. 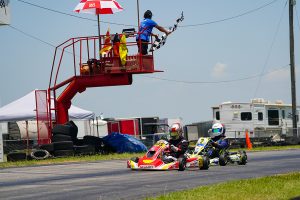 A total of 23 drivers contested for victory in 206 Senior by Cruz Racing Development with Caiden Wolfe stating his intentions early with fast time in qualifying by one hundredth of a second, in an ultra-competitive session that had the top four covered by less than a tenth. Caiden Wolfe and Melson maintained their top two positions in the first heat race. Heat Two saw Ava Elder elevate to the top position over top qualifier Wolfe with Summers in third, recording the fast lap. The Final turned out to be a race of attrition, and saw most of the front runners from the prior heats fail to finish or get shuffled down the order. Tyler Stephens fought from seventh on the grid to finish the race in second and was promoted to the top step after a penalty to provisional winner Koen Summers dropped him down to fifth. Wolfe ended up in second, up 10 spots overall with Braxden Tregre placing third and Speedsportz winner Kelvin Xing in fourth. 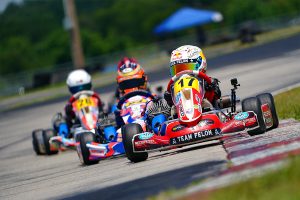 Royce Vega would lead off the 14-kart Micro Swift by Houston Freightliner / Western Star class following quick time in qualifying. Vega lost the lead to begin Heat 1 to Colton Schniegenberg on the first lap and was never able to retake the spot. It was Alex Chandler that took the win away from Schniegenberg on the final circuit. In Heat Two, Vega lead from start to finish, but was handed a three-second time penalty for a jump start, demoting him to fifth. That awarded the win to Aston Wyatt. Wyatt and Schniegenberg controlled the top two positions for the majority of the 26-lap Final until Vega and Chandler took their turn at the point, making it a four driver fight for the victory. On the final circuit, Schniegenberg was able to emerge with the top spot, earning his first triumph of the season. Vega retired on the final circuit, allowing Wyatt to grab second. Paxton Dyson was classified third and Chandler fourth while Emerson Laine completed the top-five. 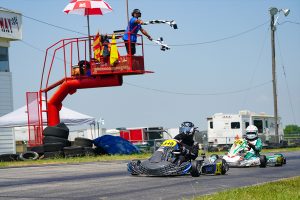 The 206 Junior class by Saville Electric welcomed a third straight victory for Ragan Saville. It was Saville earning fast time in qualifying before leading each lap of the two heat races. He was challenged in the Final as Alfred Alvarez Del Castillo took control of the point. Saville grabbed back the top spot around the midway point, however Alfred led for most of the race. He was there until the final circuit when Saville pulled off a last lap pass to secure the victory with Castillo settling for second. Ean Colimbus ended on a high in third after a difficult weekend in the heat races. Shelby Ramirez was hard charger in fourth and Jenson Harrell caped off the top-five.

It was the largest field of the season with 20 drivers entered in the KA100 Master class by Kart Racing Solutions. Martin Stone kicked off the weekend with fast time in qualifying before going on to win the opening heat race. Robby Mott was able to end the possible sweep of the event with the win in Heat Two ahead of Stone. In the Final, it was Stone back to the point, delivering a master class performance over the 27-lap run to earn his first victory of the season, becoming the third different winner on the season. Andy Miller drove to second ahead of defending champion Miguel Mier. Morgan Lebaron was fourth with Doug Foxworth in fifth while Mott retired on lap 11. 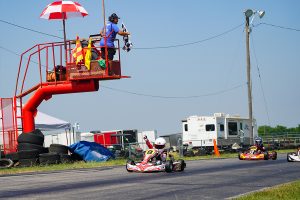 A strong field of 12 filled up the grid for the Honda Kid Karts by Helix Electric. Theodore Mitchell led the way in qualifying and led the first half of Heat One until handing over the lead to Westbrook, who went on to score the win. Andrew Anastasio fought his way through the pack from sixth in Heat Two to get the win in the closing moments of the race. Westbrook opened up the Final as the leader but lost the lead on lap eight when he retired early. This left Anastasio to take over and drove away to the victory, his first on the season. Mitchell settled for second as Brody Stoffle sneaked his way onto the podium. Victor Guss-Wunderle ended up in fourth and Marcelo Flores rounded off the weekend in fifth place. 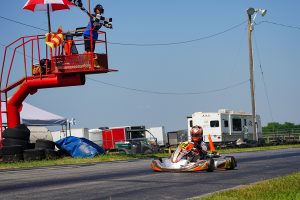 First victory on the season for Cooper Shipman in the KA100 Junior category (Photo: Studio52.us)

KA100 Junior by 4T Concrete Pumping saw 28 entries on the weekend with a hyper-competitive qualifying session that saw Oscar Iliffe earn the fast time. The gap between second and fourth was only eight-thousandths of a second, which set the scene for the dog fight to come. Illife got the hole shot from the start and held the lead of Heat One for less than a lap when Cooper Shipman made his move to spearhead the field and held that position until the checkered flag. Illife dropped down to second at the line. Shipman remained up front for Heat Two as he edged out Ernesto Rivera by five hundredths of a second to take the win. That was the last challenge Shipman faced as he led all 26 laps of the Final for the victory. The hard charger went to Helio Meza who finished outside the top-15 in both heat races, and advanced to the second spot after starting 17th. Landon Skinner drove to third with Ragan Saville fourth while Iliffe ended the weekend in fifth, earning fast lap of the race. 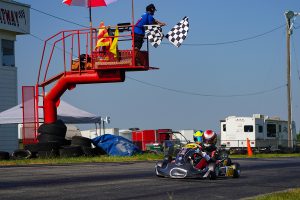 Jaxon Young led majority of the Final for the victory in Briggs 206 Cadet (Photo: Studio52.us)

Emmett Eddolls led the 206 Cadet by Ferris Mowers field in qualifying as he edged out Josey Chambers by just under a tenth of a second. Despite the effort in qualifying, Eddolls would lead Heat One up until he dropped out of the race before the halfway point. Chambers couldn’t capitalize on Eddolls retirement, instead, Jaxon Young moved his way up into top spot for the win. Eddolls would come back to win Heat Two, however, ahead of Young and Chambers. In the opening laps of the Final, the trio at the front including Aston Wyatt battled it out for the lead Wyatt held on to the top spot for the first five laps until Young claimed the position. From there, Young had no intention of giving it up and went on to earn his first victory of the season. Chambers came in half a second short at the line with Wyatt in third. Eddolls went purple on his climb up the order, up four positions to finish fourth as Dereck Wargo was fifth.

The Texas Sprint Racing Series presented by Auctionetx will continue their 2022 season with their ’Midsummer Mashup’ at the Amarillo Kart Circuit in Amarillo, Texas over the August 5-7 weekend. Be sure to follow TSRS on Facebook and Instagram, and get details on everything at www.texassprintseries.com. Those interested in supporting the 2022 program with sponsorship, please contact them via email at info@texassprintseries.com.