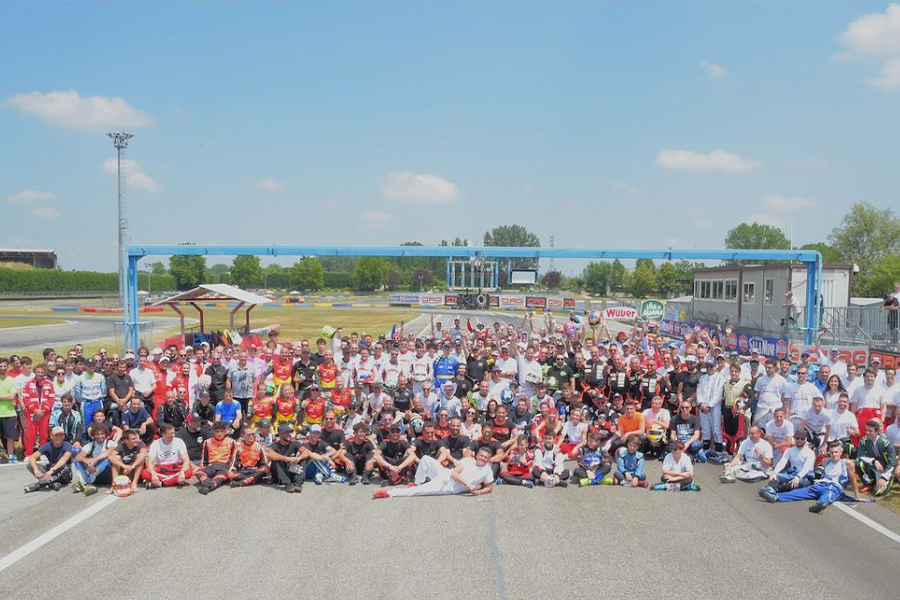 The full crews that took part in the race (Photo: Ennio Brigatti)

The 5th edition of the 24 Hours Karting of Italy organized by CRG which took place in Castelletto di Branduzzo (PV) on the 7 Laghi Kart circuit on 25thand 26th June, has been confirmed as one of the most important events in the Endurace karting scene, both from a sports point of view and for what concerns the organization.

As for the sporting part, the success went to the Italian crew called Pomposa Dream Team and made up of Michele Biffi, Gioele Bondi, Massimiliano Marchesini, Dino Masina, Gianpaolo Quaquarelli and Krzysztof Severi, who covered 1296 laps of the Lombard circuit in 24 hours of racing, while in the special Silver ranking it was the Czech Republic Steel Ring Trinec s.r.o. team of Ivo Polasek, Felipe Nardo, Filip Trombik and Jan Midrla to bring home the victory. The crew led by Martin Gregor also finished P12 in the overall standings with 1285 laps covered. The DMS Motorsport team (Claudio Biffi, Stefano Perseghin, Nicolas Russo, Davide Trombetta and Mario Villa) also made it to the podium of the overall standings, authors of an amazing race, led for many hours in the lead and finished just 32” behind the winners. The DMS team also set the fastest lap of the race with a time of 1’04″013, lowering what was worth the pole position for Team Sugo by about 3 tenths of a second. In 3rd place another great race was closed by the BAC PKI crew of Marco Bortoluzzi, Denis Furlan, Andrea Riva, Mauro Varotto, Erica Zago and Maicol Mattioli, who finished 1 lap from the winners, preceding another leading team of the event: Tutela Legale of Daniel Walti, Carlo Pasquino, Federico Gargano, Gabriele Gargano and Julien Delecrètaz.