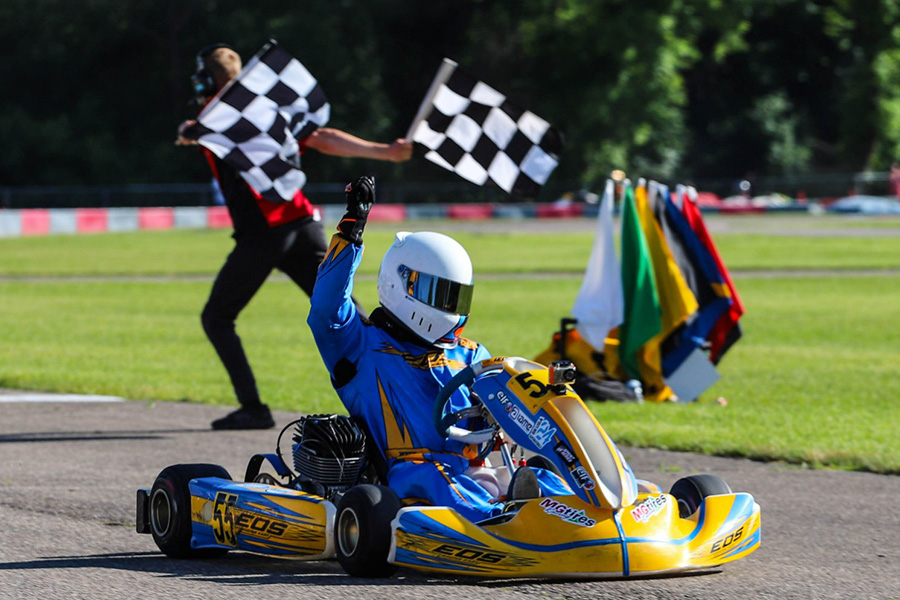 Alexander Kardashian was able to take the checkered flag first in the Round Three action of the KA100 Senior class (Photo: AG Digital Content)

The Route 66 Sprint Series – presented by MG Tires, Franklin Motorsports, Louisiana Grills, and Mills Pallet – completed the first half of the 2022 season with two rounds of racing put into the books over the June 17-19 weekend. Father’s Day weekend was celebrated at the Mill-Rite Raceway facility, at the home of the Badger Kart Club, with perfect racing weather throughout the three days on track. The Dousman, Wisconsin facility hosted the event – presented by Will Power Kart – served as Rounds Three and Four of the championship program.

The largest category of the weekend was the Woltjer Racing Engines KA100 Senior class welcoming 37 drivers. Austin Jurs added a second A-Maxx Racing Fast Time Award with a 47.720-lap in qualifying to edge out former series winner and recent Purdue University Grand Prix winner Alexander Kardashian by 92 thousandths. Jurs eventually was shuffled down the order and two-time New Castle winner Brandon Lemke took the point. Kardashian would sneak by on the final lap for the race win. The two resumed the fight in the Final, going back and forth over the 14-lap race. On the final circuit, Kardashian was able to secure the position and secure his first victory of the 2022 season. Jurs, with fast laps of the race, fought back up to second with Stephen Dial slipping up to third as Lemke dropped to fourth on the last lap. Zach Collins completed the top-five. 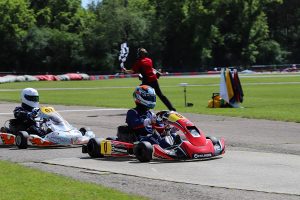 Stephen Dial returned to the series and won a wild last lap battle in round Four for KA100 Senior (Photo: AG Digital Content)

Jurs earned a third straight fast time in qualifying to begin Round Four on Sunday with Kardashian short of the quickest lap by 72 thousandths. This time, Jurs kept it up front in the Prefinal, leading the majority of the 10 laps for the race win while Dial moved up to second ahead of Kardashian. The final came down to the final two laps. Jurs led the opening six laps before Kardashian led the next four. Jurs returned to the point only to be shuffled out of the lead group prior to receiving the white flag. Kardashian went back to the lead to begin the final circuit, however, it ended up with Dial escaping the final few corners with the lead and his first victory of 2022. Jeremy Fierke was classified second with Lemke in third. Jurs ended up fourth with Kardashian fifth. 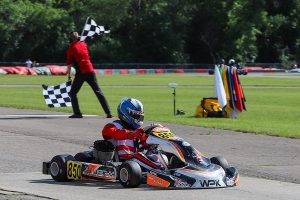 The Advance Design KA100 Junior class also welcomed new winners for the 2022 season with 20 drivers fighting it over the two rounds. Cameron Brinkman began as the driver to beat on the weekend, edging out the field in qualifying with a 48.584-lap and then leading all 10 laps of the Prefinal. He was dropped to second at the start of the Final and then on lap three, was involved in contact that dropped him down the order. This allowed Austin Olds, who jumped to the lead on the opening circuit, to lead all 14 laps to a 5.7-second margin of victory – his first at the Route 66 program. Ava Hanssen drove to second with Brayden Zirves in third. Ava Dobson and Luke Wackerlin completed the top-five. 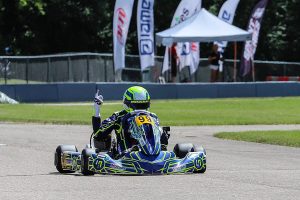 A sweep in Round Four for Cameron Brinkman in the KA100 Junior class (Photo: AG Digital Content)

Brinkman returned to the top of the order on Sunday in KA100 Junior and remained there the rest of the day. He led all 10 laps of the Prefinal and then after an early challenge in the Final, showed the way for the final 12 laps to secure a 4.9-second advantage at the checkered flag for the victory. Hanssen repeated as the runner-up finish with Clayton Slipher up to third. Saturday winner Olds ended up classified fourth a pushback bumper penalty dropped him from second, placed ahead of Quinten McPherson who recorded the fast lap of the race. 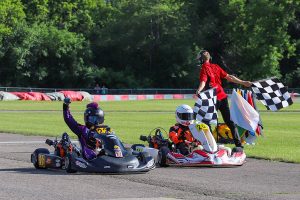 A total of four podium finishes were earned by Ava Hanssen on the weekend as she was able to add two Briggs 206 Junior sponsored by One Powersport victories to her total. Hanssen, the Round Two winner at New Castle, swept the opening round at Badger. She earned fast time in qualifying and fought off Jase Petty for the win in the Prefinal. The two remained out front in the Final with Hanssen leading the first 12 laps. Petty took the lead before taking the white flag, while Hanssen reclaimed the top spot at the checkered flag, winning by only 54 thousandths at the line. Malachi Haight had fast time in the race, driving to third ahead of Cody Lindstrom and Louis Palmisano.

Sunday in the Briggs 206 Junior class was a battle with Haight securing the fast time in qualifying ahead of Hanssen. The two had a rough lap seven in the Prefinal with Haight leading at the time. He retired while Hanssen fell to ninth and fought back to sixth by the checkered flag. Petty came away with the win and the pole position for the Final. It was Petty and Logan Wackerlin at the front in the Final until Hanssen was able to put herself into third by lap seven. With two laps remaining, Hanssen began moving forward, first by Wackerlin and then Petty on the final lap, reaching the checkered flag first by only 40 thousandths. Jackson Wolny was able to slip by Wackerlin for fourth while Haight recovered from the Prefinal DNF to finish fifth. 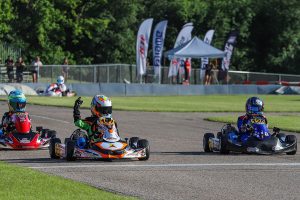 Benym Abernethy was able to record his first two victories in the DNJ Intermodal Services Mini Swift class. He qualified sixth to begin Saturday’s action with Brady Schad securing the pole position by a mere one-thousandths of a second quicker than Round One winner Ethan Tovo. Five lead changes in 10 laps for the Prefinal allowed Abernethy to climb to the top of the order, taking the win on a last lap pass over Tovo and Schad. Tovo and Abernethy were joined at the front in the Final by Landon Buher with Schad retiring after lap three. All three took a turn at the point with Abernethy securing his first series victory in the class with a last lap pass. Buher was only 76 thousandths short at the line in second with Tovo in third. Round Two winner Acen Dramaliev was fourth with Race Beckman in fifth.

Tovo set the tone to begin Sunday’s Round Four racing, only this time it was Jackson Tovo who posted the fast time in qualifying to edge out Schad and Ethan Tovo. Schad would lead all 10 laps in the Prefinal for the race win while Abernethy drove up from seventh to fourth. In the Final, it was Buher again toward the front, this time leading the opening 12 laps. On lap 13, Abernethy took over the lead and drove to his second victory on the weekend. Schad came up to steal the second spot away from Buher with Ethan and Jackson completing the top-five. 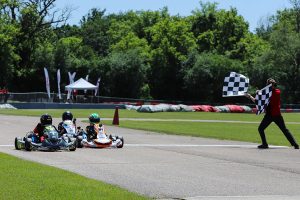 It was a perfect points weekend for two drivers on the weekend. The first was Cameron Marsha in the Quickswim Micro Swift division. Marsha swept Saturday’s action, ending it with a battle for the victory with Jacob Modjeski. The two were separated by two tenths at the checkered flag with Marsha taking his third victory on the season. Audrina Rowe was credited with fastest lap of the race, placing third ahead of Holden Harder and AJ Stoner. It was the same fight on Sunday with Marsha earning another round sweep. It was a photo finish at the line as Marsha edged out Modjeski by only 63 thousandths. Harder improved to third in front of Isaac Nowlin and Mason Gunderson. Adam Maxwell was able to sweep each round both days in the Briggs 206 Medium class by Mill-Rite. Maxwell, the runner-up both days at New Castle, drove to victory on Saturday by 5.5 seconds ahead of Brayden Johnson. Drew Szuch and Jayelynn Kerr completed the order. Sunday was Maxwell out front all day, ending with a 7.8-second margin of victory in the Final. Kerr rebounded from a DNF on Saturday to finish second ahead of Johnson and Szuch. 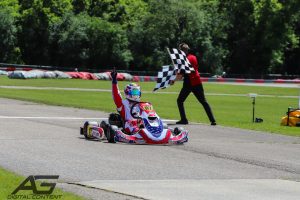 To match that performance and equal four wins on the 2022 season was Laurentiu Mardan in the KA100 Masters class sponsored by Franklin Douglas. The two-time New Castle winner was able to sweep the Saturday action at his home track, setting fast time in qualifying and leading all laps of the Prefinal and Final. Cristian Vomir won the race for second ahead of Caleb Patrie and Jerome Pettke with Roman Padans placing fifth. Danny Corcoran picked up speed overnight, breaking up the perfect weekend for Mardan by edging him out in qualifying by 72 thousandths. Corcoran led the first half of the Prefinal until Mardan took over and went on to win. Mardan would go on to lead all 14 laps of the Final with Corcoran retiring early. Padans improved to second with Pettke in third. Vomir slipped to fourth with Randy Klimek placing fifth. 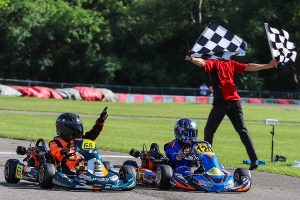 The second highest attended class on the weekend was the Perkins All-Star Briggs 206 Sportsman division with 20 drivers, welcoming two new winners on the season. It was a clean sweep as Brady Schad defended his home track by leading every lap for Round Three. Schad went wire-to-wire in the Final, holding off Landon Buher by 28 thousandths at the checkered flag. Ezekiel Haight was a close third with AJ Stoner and Christopher Youtsey completing the top-five.

Haight was the driver to open up Round Four of the Briggs 206 Sportsman class as the driver to beat, setting fast time in qualifying to clear the field by over two tenths. Both Haight and Schad led during the Prefinal until Stoner put himself at the front to score the win. They would be joined in the Final by Jacob Modjeski. Stoner, Haight and Schad all led in the 14-lap race until Modjeski put his name in the running. It ended up becoming a last lap battle between the Saturday winner Schad and Modjeski. At the line, Modjeski came away with his first series victory by 68 thousandths ahead of Schad. Youtsey climbed up to third bringing Buher in fourth and Domont in fifth. 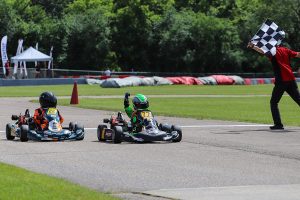 The Route 66 Sprint Series opens up the second half of the season with a trip to the newly renovated and repaved Motorsports Country Club of Cincinnati. The August 5-7 event takes competitors to the Batavia, Ohio facility for the first time in series history, contesting Rounds Five and Six. More information regarding the Route 66 Sprint Series can be found online at www.route66kartracing.com or on the Facebook page.