Tony Kart in Pole Position at the European Championship in Cremona 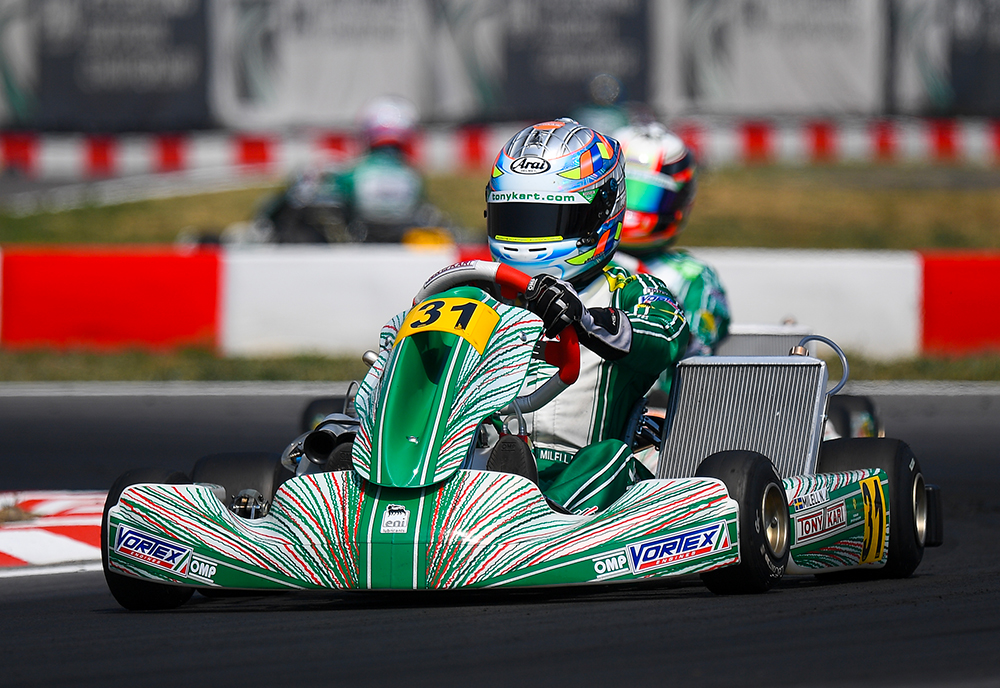 Our Racing Team opens the second and final round of the FIA Karting European Championship 2022 reserved for KZ and KZ2 categories with the best time in qualifying heats, however the weekend does not end as expected.

The FIA Karting European Championship for KZ-KZ2 of our Tony Kart Racing Team closes with bittersweet notes. On the unprecedented track of Cremona, in Italy, the Tony Kart Racer 401 RR – in combination with the Vortex RTZ/RSZ engines of the OTK Kart Group’s “engine division” – signs the pole position in KZ class with a gap of more than 2 tenths on the closest chaser. Unfortunately, however, the weekend does not end according to expectations.

In KZ category, it is the reigning world champion Noah Milell gaining the pole position in the qualifying session. Unfortunately, however, the Swedish driver comes into contact with another competitor during the second eliminatory heat and has to stop prematurely. With a timetable including the running of only three heats and the cancellation of the Super Heat (an excellent opportunity to attempt a comeback), Noah’s weekend is then irreparably marked. An episode that does not prevent him, however, to perform a comeback and place seventh in the final.
In Sunday’s race it is Juho Valtanen keeping the Tony Kart Racing Team’s flag high, missing the podium by a few tenths of a second. The Finnish driver, since the Friday’s free practices, is a candidate for a place on the podium. After a good performance in the qualifying heats, Juho is third in the overall ranking, a result that earns him the start from the second row in the final. Valtanen battles fearlessly with his rivals throughout the race and ends the weekend in the fourth place. Tuukka Taponen, at ease in the master class of the shifter karts, confirms his potential with the best lap in the final and finishes just behind Milell, with the reigning KZ world vice-champion Lorenzo Camplese just behind him. Simo Puhakka’s race was not so lucky: even in the second round of the championship he shows to have the pace to compete at the top of the ranking
on Friday already. During the first lap of the final, the experienced Finnish driver, quickly gains third place, but a few laps to the end he is forced to put an early end to his race. A weekend of growth, on the other hand, for Adrien Renaudin, our fifth best driver of the final, and for Mario
Ljubic, in his second appearance with our Racing Team.

In KZ2, Jean Luyet proves once again to be our best driver of the cadet class. The Swiss driver records two second places and a fast lap in the qualifying heats, for a total of eight positions gained compared to qualifying. The cancellation of the super heats of Sunday morning forces
Luyet to give it his all in the final, but the Swiss however easily hits the Top 10. A difficult weekend, is that of Samuel Luyet, as well as Norton Andreasson despite a fifth place as his best result in the eliminatory heats.

No rest for the Tony Kart Racing Team, which remains in Italy: in fact, next weekend (June 23rd -26th) it will be on track at the Franciacorta Karting Track for the fourth and last Champions of the Future Euro Series’ seasonal appointment, reserved for the OK and OKJ classes.