eKartingNews.com Driver of the Month: May 2022 – Max Garcia 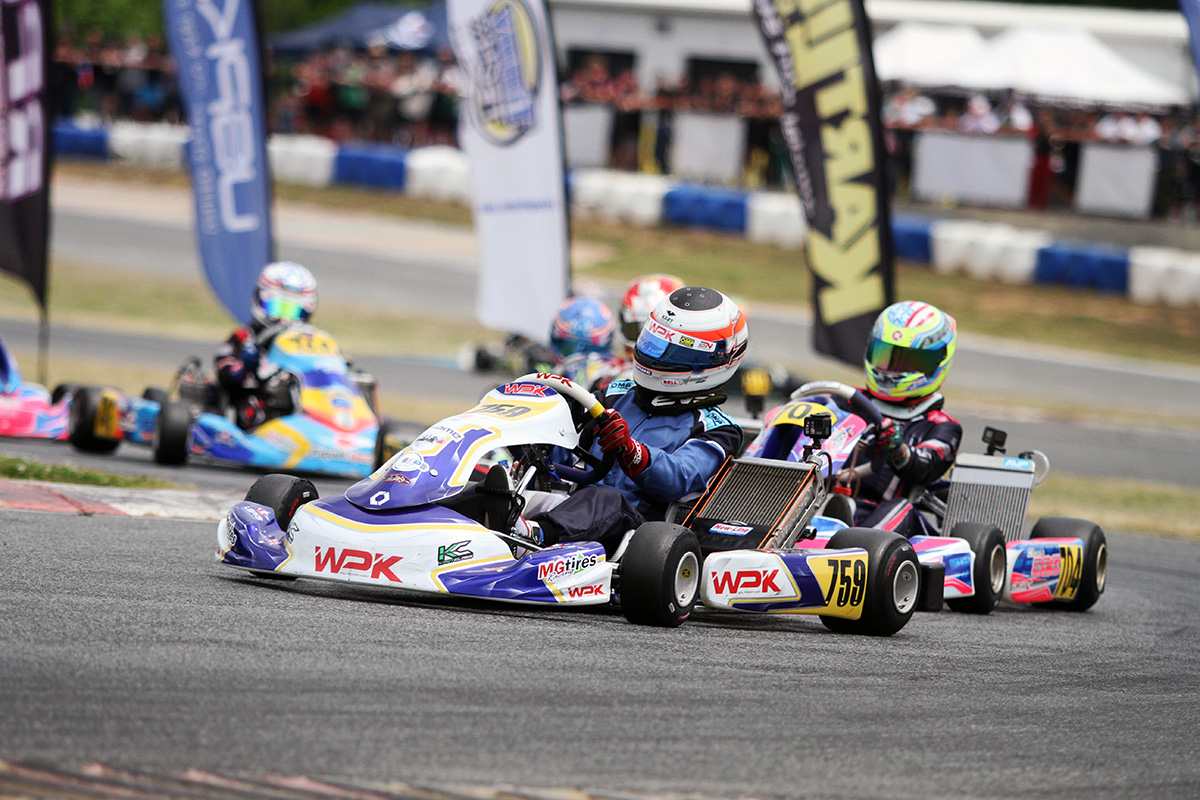 Max Garcia has been one of the most consistent drivers in the Junior ranks since moving there in 2021. During his rookie campaign last year, Garcia secured the second spot in the Superkarts! USA Pro Tour championship, including one victory and five top-five results. He picked up four more top-five results in United States Pro Kart Series competition to finish the championship chase in third. Now, following the USPKS Carolina Grand Prix event over the April 30-May 1 weekend, Garcia is the championship leader in both KA100 Junior and X30 Junior categories with four podium results at the GoPro Motorplex. 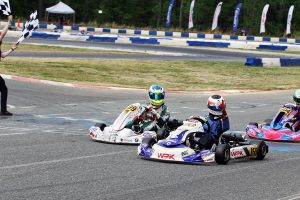 Garcia won the Sunday final in KA100 Junior, and leads both Junior championships at the halfway point (Photo: EKN)

Garcia entered the weekend leading the KA100 Junior championship after winning Round One and placing fifth in Round Two in Orlando. Max started the weekend by qualifying fourth in his MPG Motorsports / Will Power Kart entry. With the field split up for the Prefinal, Garcia took advantage of starting on the front row to win the race and earn a front row position for the main event. He kept himself in the hunt after dropping to third early and fought his way to the lead in the second half of the race. Racing against Helio Meza and Cooper Shipman, Garcia was the ‘third wheel’ against the two teammates. He fought strong, and came up just short of the victory to place runner-up.

The next round began with Garcia qualifying back in 10th, needing to do some work in order to keep the top-five streak going. He gained just one spot in the Prefinal to finish fourth, starting the main event from the outside of Row 4. The start to the Final was filled with action including a number of drivers in the lead group. Garcia used that opportunity to climb forward, reaching the lead by lap six. The lead exchange a few more times with Garcia – who led the most laps of the race – getting shuffled down to third with a few laps remaining. By lap 20, Garcia was back to the point and fought off the competition to secure his second victory of the season, reaching the line first by only 64 thousandths of a second.

Max was once again pulling double duty on the weekend as he did in Orlando, missing out on the podium by one spot each main event. In Mooresville, he was in the top-three in all on-track sessions except for one. That one session was in Saturday qualifying when Garcia qualified fifth. He fought his way up to the second spot in the Prefinal to start the main event from the front row. Garcia led early and settled into second as he and Caleb Gafrarar were able to break away. Max returned to the lead in the final few laps, and led up until the final corner. Gafrarar was able to slip by and reach the checkered flag first as Garcia had to settle for second.

Qualifying was an improvement for the Sunday round of racing, ending the timed session with the third quickest lap, only nine hundredths off the fast time. Garcia led the majority of the Prefinal, going on to win and earn the pole position for the Final. The 24-lap main event featured eight different lead changes alone with Garcia fighting it out in the lead group. He led four different times over the race, including toward the end of the race. He was shuffled back to second by Canadian Ayden Ingratta with the white flag waving. After a wild last lap, Garcia came up just short at the line for the victory, missing by 41 thousandths of a second. The two runner-up finishes over the two days helped to give him the top prize in the cash purse for the weekend total, earning $2,500.

The two victories over the four rounds in KA100 Junior has Garcia leading the championship by 55 points heading into the second half of the series. With the two runner-up results in X30 Junior, Garcia has become the point leader by 48 points. Max will look to continue his position at the top of each championship with the third event of the USPKS program with a July 8-10 visit at the Briggs & Stratton Motorplex at Road America in Elkhart Lake, Wisconsin.

Garcia recently made a trip to Europe to compete at the Champions of the Future and FIA European Championship events in Sweden. This was the first time competing in the OK Junior division overseas. Garcia, racing for DPK Racing aboard a Kart Republic, qualified 45th overall for the COTF event. In his fourth heat, Garcia was able to secure a race win. He ran as high as seventh in the Final until a mechanical issue put him on the sidelines. The following weekend, Garcia raced his way into the main event. After qualifying 60th, Max finished a best 10th in the five heat races with a worst finish of 21st. That put him 40th overall after the heats. In the Super Heat B, he ended up 15th, which put him 36th overall to start the Final from the last position. Garcia climbed as high as 22nd until the final lap of the 21-lap event when contact dropped him to the tail of the field – finishing 31st. 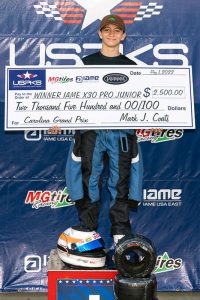 Chassis: Kart Republic / Will Power Kart
Engine/Engine Builder: IAME KA/Comet Racing Engines and X30/BN Engines
Sponsors: Bell Racing Helmets, OMP America, Starling Design and SPMI+
Series You Compete In: SKUSA Pro Tour, United States Pro Kart Series, Sunshine State Karting Challenge, Champions of the Future, FIA Karting European Championship
Years Karting: 5
How did you get started in karting? My Dad would put me in a kart and pull me around with a rope in the warehouse at the Homestead-Miami Speedway when I was six. After that, I began doing practice laps at AMR Motorplex until I was quick enough to race.
What has been the high point in your racing career? Winning a heat and qualifying for the final my first time in Europe and winning my first X30 Junior race, in my rookie year.
What are your goals in racing? To race cars professionally.
In a few words, how would you describe your driving style? Smooth, Clean and Fast
Funniest moment at the race track? When I cracked my front tooth riding a scooter after a race win

May 2022 Driver of the Month – Honorable Mention: