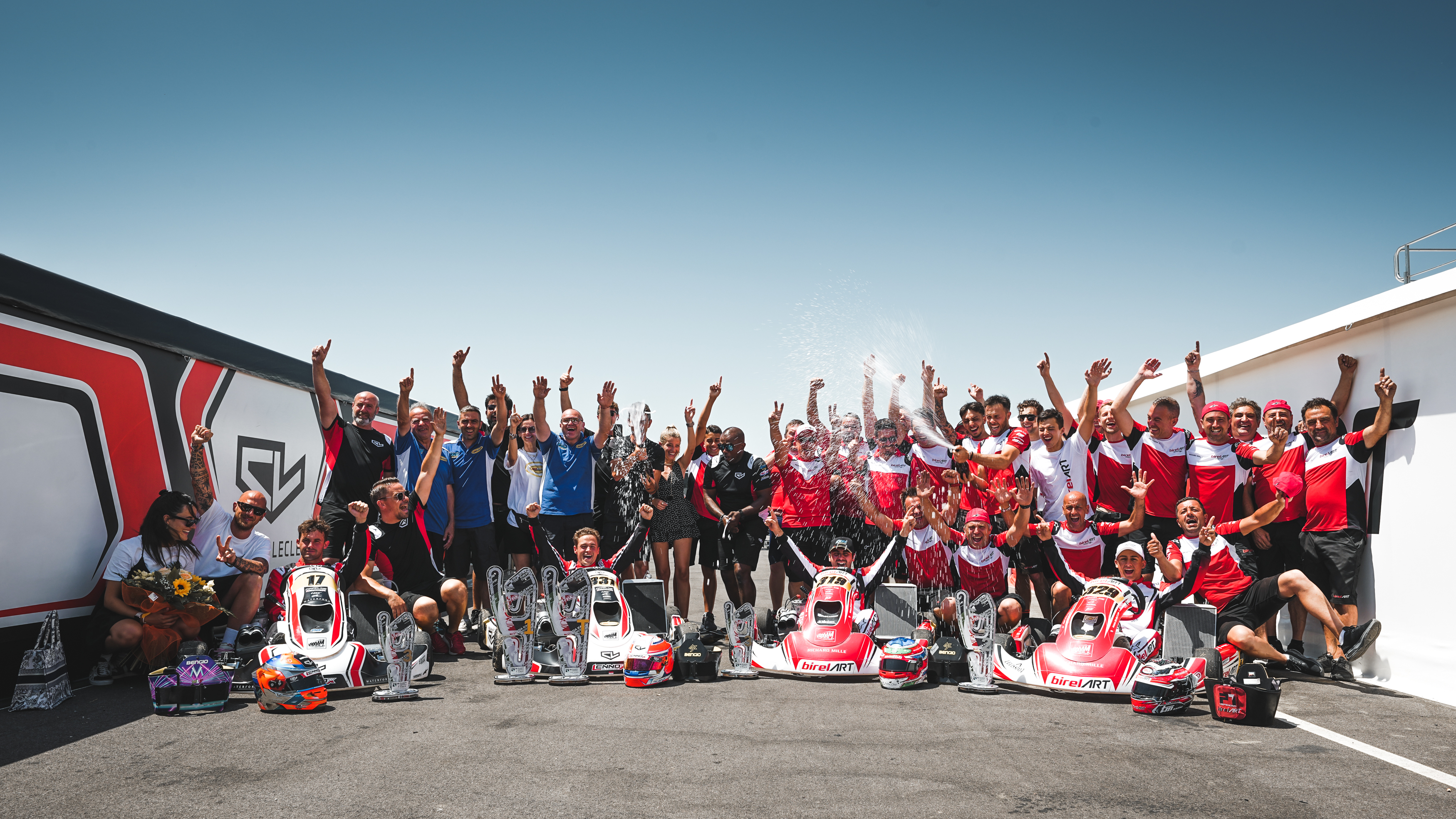 The Birel ART factory continues to write karting history in golden letters. In Cremona, the Italian chassis took the top three places in the KZ2 Final thanks to Tom Leuillet,

Cristian Bertuca and Alessio Piccini. Already a winner in Genk, the Frenchman therefore brings a deserved title to the Birel ART and TM Racing brands, as well as to the Leclerc by Lennox Racing team. In KZ, Birel ART was also delighted with another podium for Matteo Vigano, who became the 2022 European Vice-Champion.

The European Championship in the KZ and KZ2 categories experienced different track conditions during the two meetings held in Genk in May and Cremona in June. In Italy, the drivers had to deal with much higher temperatures than in Belgium, resulting in very high grip levels and unusual rubber deposits on the racing lines. In both cases, the Birel ART-TM Racing systems proved their effectiveness.

In KZ2, their control of the event was undeniable and uncontested, as Ronni Sala, President of the Birel ART Group, recalls.

“Our drivers won 10 of the 15 Qualifying Heats, set countless fastest laps in the race and occupied the entire first two rows of the Final. This domination ended with a fantastic hat-trick of wins.

I am happy for Alessio Piccini, who was looking forward to this podium in FIA Karting in KZ2, and for Cristian Bertuca, who is a young driver from OK with very little experience in this category. Concerning Tom Leuillet, it should be remembered that he did not race for a whole year due to a serious leg injury at the beginning of 2021. After his victory in Genk, he wanted to finish with panache by winning again, while setting the best lap in the Final. His team manager Jordon Lennox-Lamb was right to trust him. Moritz Ebner was a brilliant leader in the heats and completed the top five, which included four Birel ART karts in total.”

Several other Birel ART-TM Racing drivers deserved a place in the Final, including Giuseppe Palomba, who won a heat before failing to make it to the Final, or the young Oscar Targett, who was excellent in 9th place on Sunday after his faultless performance in the heats, as well as Leonardo Marseglia, who also performed well, but was heavily penalised in one heat. In the overall ranking of the European Championship, the result is convincing, with the title for Leuillet and 3rd place for Piccini in front of Bertuca.

A very positive weekend too in KZ

One year after winning the European Championship with Riccardo Longhi, the Birel ART Racing Team was hoping to retain its title with Pedro Hiltbrand, who was undoubtedly the best in the Qualifying Heats with two victories and two lap records in the three heats. “Unfortunately, his start in the Final from pole position was not the best of his career,” continued Ronni Sala. “Then his performance level was not as high as in the heats, although he was fastest in the morning warm-up. I don’t like to make excuses, but we had a lot of tyre problems during the meeting

While Hiltbrand had to be satisfied with 5th place, which leaves him at the foot of the European Championship podium, Matteo Vigano climbed to 3rd place in the Final with his Birel ART from the Charles Leclerc by Lennox Racing team. Vigano is now the new 2022 European KZ vice-champion. “I congratulate our technical staff and our partner TM Racing for the engine,” added Riccardo Longhi, team manager of the Birel ART Racing Team.