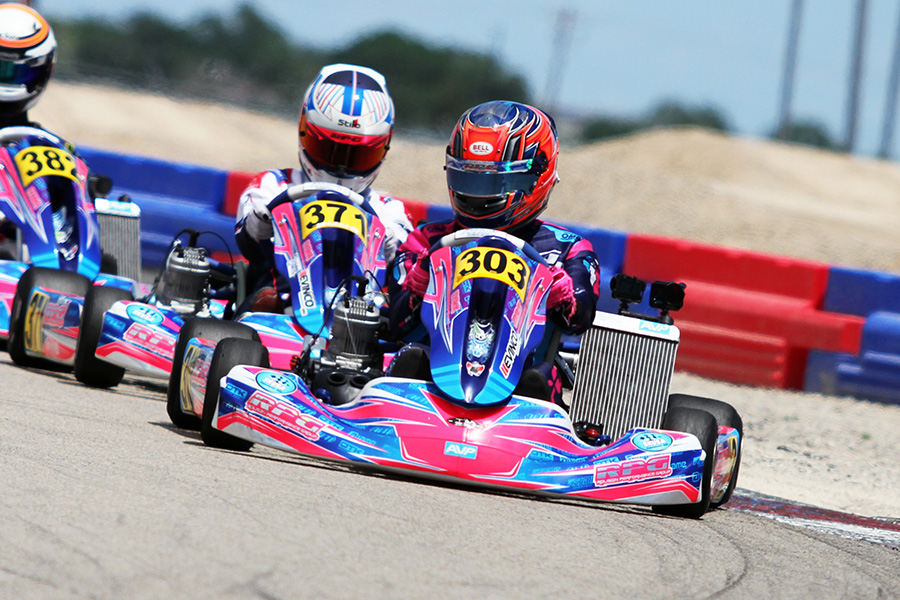 The Rolison Performance Group traveled to the Superkarts! USA Pro Tour SpringNationals presented by ASPEN Fuels USA – the halfway point of the 2022 program. The Utah Motorsports Campus played host to Round Three and Four, welcoming the event for a third time in four years. The Kosmic race team of Rolison Performance Group brought a total of 32 entries represented in eight classes on the weekend with the team reaching the podium 11 times and secured four victories.

“It was certainly a challenge weekend with the tough competition and the extreme warm temperatures we had to face in Utah,” stated Mike Rolison – owner of Rolison Performance Group. “This was a weekend we need for Ryan Norberg to establish himself as the championship leader. I was extremely excited about the RPG debut for Max Taylor and the great progress several of our KA100 Senior drivers made, earning their career best finishes at this level.”

In X30 Senior, Rolison Performance Group driver Ryan Norberg was by far the dominant force all weekend. Norberg’s only blemish on the weekend was Saturday qualifying, where teammate Paul Bocuse took the top honors in the timed session. From there, Ryan won both Prefinal and Final events each day along with fast time in Sunday’s qualifying to secure two more victories on the season for the Florida native. RPG had an additional seven drivers representing the team in the X30 category over the weekend. Bocuse was among the front runners all weekend, reaching the podium on Sunday after securing a third-place finish, and finished just outside the podium in fourth on Saturday. Hayden Jones and Jason Leung both had solid weekends after the pair of them both finished in the top 10 in each main event. Both drivers had a best finish of sixth on the weekend with Leung there Saturday and Jones earning the spot Sunday. Jones ended up seventh on Saturday and Leung 10th on Sunday. Donovan Bonilla had a best finish of 17th, Laurent Legault 18th on Sunday, and Wes Duchak achieved a 21st place finish on Saturday. 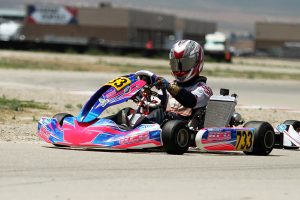 Max Taylor joined RPG for the first time in Utah, placing on the podium both days in X30 Junior with second and third-place results (Photo: eKartingNews.com)

X30 Junior was a closely contested battle throughout the weekend, with RPG pilots Max Taylor and Caleb Gafarar spearheading the teams charge. On Saturday, the pair fought hard to secure a second and a third in the Final, with Taylor earning a runner-up finish in his debut with RPG and Gafrarar in third. On Sunday, Taylor fended off his teammate to secure the final spot on the podium, with Gafrarar having to settle for fourth. Ernesto Rivera had a strong weekend, and had the pace to fight for podiums, but was put on the back foot after a DNF in the Prefinal on Saturday. Nevertheless, Rivera came back strong in the Saturday Final to finish 12th and finished a respectable fifth in Sunday’s competition. Teddy Musella completed the armada of RPG karts in the X30 Junior class, securing a top-10 result on Saturday and just missing out on that same achievement on Sunday by finishing 12th.

2021 SKUSA SpringNationals KA100 Senior winner Caleb Shrader was at the sharp end of the field all weekend. Shrader managed to grab pole position in Saturday’s qualifying session, yet dropped down to third in the Prefinal, and finished in the same spot in the Final for his first podium result of the 2022 season. Sunday, Shrader fought hard but could only manage a very respectable seventh in a competitive Senior field. WinterNationals winner Cedrik Lupien was among the contenders all weekend long, however, a safety tech issue removed him from the results on Saturday while a starting infraction in the Final Sunday cost him a top-five result, placing eighth. Jack Doyle, making his first start in Utah, had a best result of eighth place. Andy Nish snuck up into the top-10 on Sunday after a difficult Saturday, placing ninth in the Round Four Final. Kieran Rogers had a best result of 11th, Grace Hemmerde secured top 20 finishes for both days, while teammate Taila Akigami was just short of breaking through that top 20 mark. Zak Meyer unfortunately was not able to finish either main event races on the weekend. 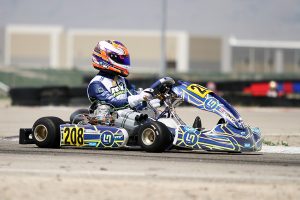 Hannah Greenemeier finish fifth in both main events on the weekend in her Pro Shifter debut (Photo: eKartingNews.com)

Caleb Gafarar once again led the charge in KA100 Junior for Rolison Performance Group. Gafrarar set fast time in qualifying for the round on Saturday, winning the Prefinal and led in the Final until he ended up getting shuffled down to fifth. An incident in the Prefinal on Sunday dropped Gafrarar to the 20th starting spot in the Final. The North Carolina driver was able to climb up 14 spots to finish sixth, salvaging points in the championship chase. Ernesto Rivera came back from a less than ideal qualifying session on Saturday and went from 13th to sixth in the Final, which would be his best result on the weekend. New RPG driver Max Taylor, also running double duty, got inside the top-10 on Saturday with a seventh-place finish, but sat out the action on Sunday due to illness. Gavin Wardle had a rough weekend but kept pushing to get inside the top 30 in Saturday’s Final.

The 2021 SKUSA Pro Tour X30 Senior champion Hannah Greenmeier made her debut in the Pro Shifter class this weekend. She managed to secure two fifth place finishes in the main events with similar pace to the best shifterkart drivers in the country and the world. Victor Jimenez moved from Master to Pro for the weekend and battled throughout the weekend. An unfortunate retirement in the Saturday Final was followed by a 21st finish on Sunday.

Jackson Gibson was the only driver on the RPG squad to compete in the Micro Swift category. Gibson missed out on the podium by less than a tenth of a second on Saturday finishing fourth and had a hard-fought day on Sunday, ending up in seventh after fighting for a podium finish all race. Mini Swift saw two drivers represented under the RPG tent. Alan Bonilla and Payton Anderson had a difficult weekend amongst the ever-competitive Mini Swift ranks. Bonilla had a great fight back on Saturday, after qualifying in 28th to climb up to 19th in the Final. Anderson finished 29th Saturday however suffered a retirement on Sunday. Mario Barrios and Mike Rolison were the only two drivers to compete in X30 Master class on the weekend with Barrios taking both wins and Rolison runner-up on Saturday before sitting out Sunday’s action. 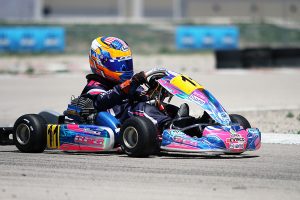 Jackson Gibson fought hard for the podium both days in Micro Swift, finishing fourth and seventh on the weekend (Photo: eKartingNews.com)

The next event on the 2022 Rolison Performance Group schedule will be a home weekend. The California ROK Championship on June 24-26 is set to take place at the unofficial home circuit of RPG – the Pat’s Acres Racing Complex in Canby, Oregon. RPG drivers will close out the SKUSA Pro Tour with the SummerNationals at the New Castle Motorsports Park in New Castle, Indiana on July 29-31. In between will be the third stop of the United States Pro Kart Series, scheduled for July 7-10 at the Briggs & Stratton Motorplex at Road America in Elkhart Lake, Wisconsin.

“Thank you to the entire team and the families for battling through the weekend in Utah,” added Rolison. “We have a busy calendar moving forward after getting to reset in May. It will be great to go back home and get a full weekend of racing at Pat’s, as many of our drivers have not raced there. “The team will then focus on the USPKS and SKUSA events in July with test sessions planned prior to each weekend to make sure the team is ready to keep us in the hunt for victories and podium finishes, and in line to battle for championships.”