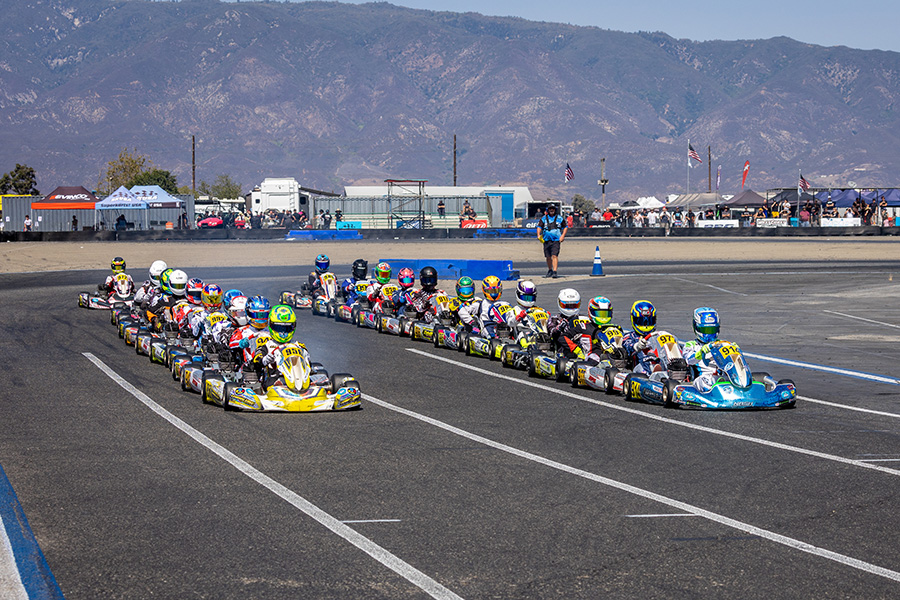 The California ProKart Challenge returns to action for the lone double-header weekend set for June 24-26 at the CalSpeed Karting Center in Fontana (Photo: Spencer Russell - photosbysmr)

In just one week, the California ProKart Challenge returns to action and hosts the lone double-round weekend of the season. Competitors from all over the west coast will converge on the CalSpeed Karting Center facility in Fontana, California during the June 24-26 weekend for Rounds Three and Four of the Superkarts! USA regional program. The ‘Sportivo’ layout of 0.656 miles in the clockwise direction will be the selected circuit at one of the most popular venues on the schedule this year. A full day of practice on Friday will be followed by two separate rounds of competition on Saturday and Sunday, taking the championship program into the second half of the season.

Two runner-up finishes have Ethan Lampe at the top of the championship standings in the HRT Driver Development KA100 Senior class. Lampe holds a 200-point advantage over Luis Perez, with Timothy Carel in the third spot. Both races were won by one-round drivers Frankie Mossman and Blake Nash, who are back in 13th and 12th respectively in the standings thus far. Keagan Kaminski has been the most consistent over the opening two rounds in the Nash Motorsportz KA100 Junior class. Kaminski has a third and fourth-place finish in the two events at Buttonwillow and holds a 20-point advantage over recent SKUSA Pro Tour SpringNationals winner Charlie Smith, with Alex Mercado in third. Round One winner William Rasmussen sits fourth with Round Two victor Jesus Vasquez Jr. back in eighth.

The top four in the Empire Karts Mini Swift class sit within 100 points heading into the double-round weekend at CalSpeed. Johnie Stamps has two runner-up finishes to hold the point lead, with Round One winner Michael McGaughy back by 70 points. Nixon Ellsworth and Round Two victor Nico Sarphati are close behind in third and fourth. The P1 Racing Engines Micro Swift class has Round One victor Matthew Cagle at the top of the point standings after two rounds. He holds a 75-point advantage over Julian Sanchez, with Bristol Borneman in third. Round Two winner Troy Ferguson has only one round of points thus far, sitting eighth in the championship.

Robert Switzler has set the bar after two rounds in the Leading Edge Motorsports X30 Master division. The winner from Round Two is leading the championship by 65 points over Scott Nealon. Brian Phillipsen has a perfect score through the first two rounds in the Mike Manning Karting KA100 Master title chase. Ronnie Swaim is second, with Michel Manning and Ron Schoonover tied for third. Brett Revetta is the lone driver to compete at both rounds in the Doran Motorsports Group X30 Senior class.

Multi-time series champion and four-time SKUSA SuperNationals winner Billy Musgrave is the top driver in the Factory Karts Pro Shifter standings. A first and a third-place finish over the first two rounds have helped him establish a 143-point lead going into CalSpeed. Ansel Baldovin is second, with Round Two winner Jacob Gulick in third. Michael Guasch was the lone driver in the Master Shifter class at Round Two, with more drivers expected at the CalSpeed double header.

Race Pre-Entry remains open for the third event of the 2022 California ProKart Challenge until the online registration deadline of Tuesday, June 21 at 11:59pm PDT. As always, a 2022 SKUSA membership is mandatory to register and compete. Complete race and venue information, along with a tentative weekend schedule, can be found at the PKC Event Page. Pit Spots Reservations and pre-paid Overnight Camping are highly recommended and available by going to this CPKC CalSpeed webpage.