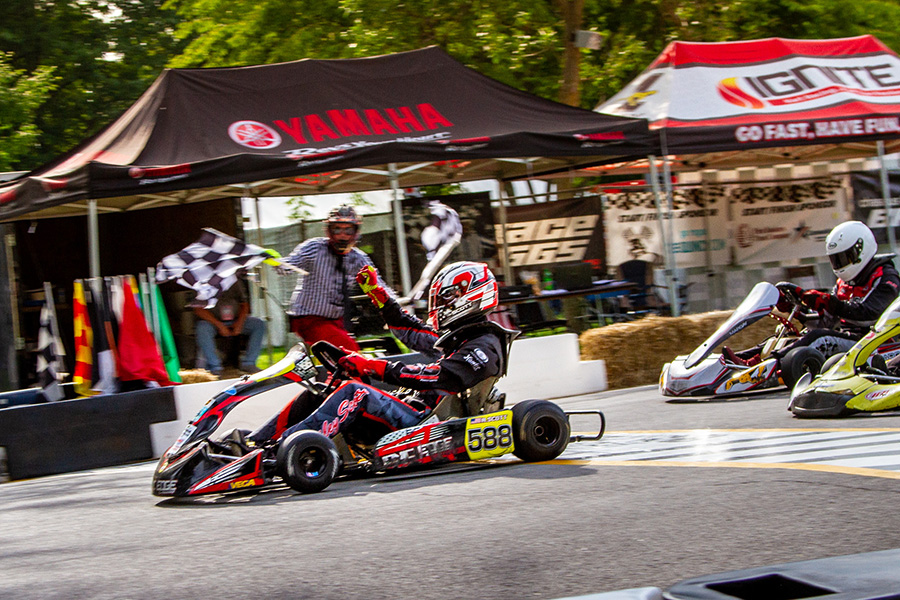 The streets of Quincy once again saw karters from all over the country descend on the Illinois town for one of the most prestigious kart races in North America – the Quincy Grand Prix. First held in 1970, the Quincy Grand Prix held its 36th edition of the race last weekend. The 1.125-mile street circuit rolls through the South Park, in southwest Quincy which borders the Mississippi River and the state of Missouri. The track offers drivers a unique challenge, with the unique street setting within a park, and the margin for error almost zero at this illustrious circuit. 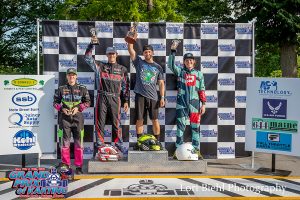 A total of 324 entries competed over the two days of competition, including the Saturday Sprints and the Championship Sunday categories for this year’s Karting Grand Prix, with all of them setting their sights on the coveted Gussie Trophy. The Trophy is given to the winners of the Championship Sunday races and honors the late Gus Traeder, who first began promoting the Quincy Grand Prix back in 1970.

The Quincy Grand Prix course is truly one of a kind and a completely new challenge compared to any other road course in North America. Drivers described the track as a fast-flowing challenge, with tricky blind apexes and a very low grip track surface at the start of the weekend. Drivers and team members also applauded Terry Traeder and the whole track crew, who did an amazing job setting up the track, with driver safety as the primary focus around the 1.2-mile street circuit. 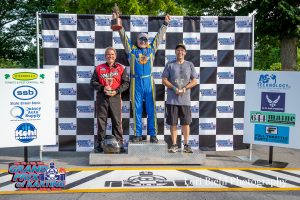 The first main event of Sunday’s championship day featured Quincy native Adam Klingele taking home the Gussie trophy in Briggs Medium after a close battle with polesitter Riley Scott, and a race that saw the top six all finishing within 8 tenths of each other. Klingele started third behind Avery Scott, but got past her on the first lap, moving him up to second where he stayed for a majority of the race. Riley Scott lead up until the last lap, where Klingele made his move to secure top honors. Riley Scott ended up in second, with Cole Rodgers capitalizing on a stellar first lap to take home third. Avery Scott settled for fourth with California native Brendan Baker finishing fifth in his first main event at the Quincy GP.

Donald Newman took the win on Sunday for Briggs Legends, after a three-way fight for the lead early in the race. With the race being a combined event with Briggs Medium, Newman started 17th overall, and crawled his way up to 12th, along with the class win. Keith Scharf and Todd Bolton made up the rest of the top three, with all three drivers finishing within two tenths of each other at the strip, with over a 16 second gap to fourth. Joel Negus came fourth and Craig McNeese completed the top five. 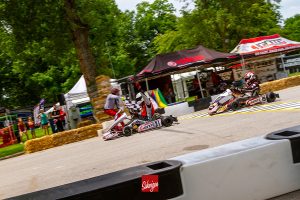 Margay Ignite was the second race to hit the Quincy Grand Prix circuit on Sunday with Jeff Dolian earning his first of two wins on the day. Dolian – an already five-time winner in the past – had a remarkable recovery in a hectic race that saw him drop down to seventh on the first lap and featured him passing four karts in the final two laps to take the victory, his second in the class after winning in 2019. Multi-time Rock Island Grand Prix winner Tony Neilson lead from the pole position until the final circuit when the hard charging Dolian snatched away the victory on the final lap. Neilson ended up on the second step of the podium with Riley Scott finishing in the same spot he qualified in third. Trevor Eggemeyer and Ashton Wheeler completed the top-five.

In Pro Shifter 125, Phillip Smith put on a clinic as he set the fastest time in qualifying (1:02.103) by 1.3 seconds, and then went on to win the Sunday final by an incredible 18.3 seconds. The CKR driver mentioned how this was an emotional victory for him and expressed how much this event and this win meant to him being a Quincy native. Bryan Smith came home second and Kerry Sherman rounded out the top-three. Terry Lawrence ended up in fourth and Minnesota native Ryan Franke finished fifth in his first time to the street circuit. 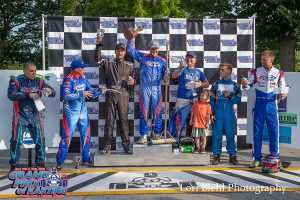 Seven-time Quincy Grand Prix winner Tony Neilson added yet another Gussie to his collection with victory in Briggs Heavy after a chaotic race that saw outside pole sitter Matt Krechel DNF on the first lap. Neilson started sixth and managed to climb up to third on the first lap. On lap three, top qualifier Gage Rucker lost his lead and plummeted down the order to sixth on the following lap where he stayed for the rest of the race. Brenden Baker, after starting third found himself leading on lap six, but ended up finishing 10th after losing the lead the following lap. Jeff Dolian finished second and Andy Cantu, after starting all the way down in 10th, finished in third. Ashton Wheeler crossed the line in fourth after starting down in eighth, and Riley Scott finished in fifth after an up and down race.

One of the unique aspects of the Quincy Grand Prix is the chance to experience what karting was like in the ‘old days’, with the highly popular and fan favorite Vintage class. Christian Miles – a Quincy native and one of the top young karters in North America – was the class of the field on Sunday, taking the win by over 36 seconds and lapping all but three karts in the 18 kart field. Miles pace advantage was monumental, setting a lap time over four seconds fasters than the second fastest kart in the final on Sunday. Matt Krechel came home second with David Fischer finishing third. Marty Westen and Tom Day rounded out the top-five. 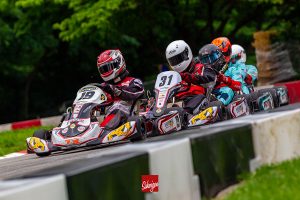 Ignite Legends and Ignite Heavy shared the track for their final on Sunday, making for some multiclass racing as the top end of the Heavy class mixed it up with the Legends. In Legends, Keith Scharf led from pole and never gave up his lead taking the win, as Pete Vetter and Michael Stephenson battled it out for second, with Vetter winning that battle. LeRoy Groendeyk ended up fourth while Richard Whicker came fifth after a DNF.

In Heavy, Jeff Dolian took home yet another win, after him and second place finisher, Tyler Grafton cut their way through the field together to finish over 1.5 seconds in front of third place finisher Jeremiah Davis. Rick Fulks and Bryan Strackeljahn completed the top-five finishers. 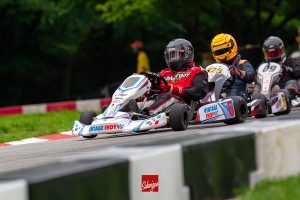 In Briggs Masters, Matt Krechel was able to add his name to the list of winners in the category, taking the win over Jeff Dolian by a nail biting eight hundredths of a second! Third place finisher Adam Klingele was not able to convert his pole position into a win. After leading the entire race, he lost the lead to Krechel on the final lap and ended up third. Finishing just behind in fourth was Jeff Scott, who had an amazing drive after staring 10th and was third on the penultimate lap, only to lose in the dying moments of the race. Completing the top-five was two-time class winner Tony Neilson.

Defending Pro FK-100 winner Ethan Arndt added another Gussie to his trophy cabinet this year, after starting fourth and climbing his way to the front by lap four. Arndt then went on to extend his advantage, finishing 5.1 seconds ahead of the challenging pack. The second position was highly contested by polesitter Pete Vetter, Riley Scott and Gage Rucker. Rucker, after leading, unfortunately retired on the sixth lap, which then made it a two driver fight between Vetter and Scott. It was Scott that would prevail and Vetter having to settle for third. Jeff Scott and Cameron Stock rounded out the top five. 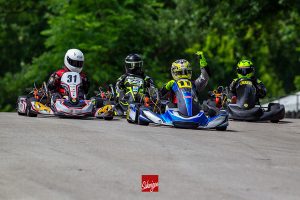 Phillip Smith made it 2 for 2 on the weekend in the shifter categories by also winning in the Pro Shifter Open class. The race was a wire-to-wire performance, winning by just under 10 seconds to his nearest rival. Justin Kelly had the same race as Smith, starting and finishing in the second position. Bryan Smith had a dog fight on his hands to try and secure third for the day, holding off Clay Robbins and Terry Lawrence, who all were in third at some point during the 12-lap race. Terry Lawrence finished fourth and Clay Robbins closed out the top-five finishers.

Ignite Masters saw a crazy first lap, with fast qualifier Pete Vetter the only driver in the top 10 not to change position in that first lap. However, second and third place starters Rick Fulks and Michael Stephenson didn’t get as clean of a getaway as the top qualifier. Fulks dropped down to 10th on the opening lap and could only manage an eighth-place result while Stephenson lost a handful of places on the opening laps and retired on lap 5. Vetter led 11 of the 12 laps but couldn’t hold off Tony Neilson, who started down in sixth and had a storming final lap getting past three karts to take home yet another Gussie and his second of the weekend. Vetter held on the to take second, while the fight for third was won out by Matt Krechel. Jeff Dolian finished fourth after starting in the seventh spot and Robby Warner made up four places to finish in fifth. 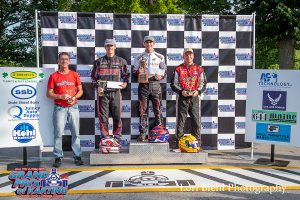 Pro Briggs was by far the biggest single class of the weekend with 25 drivers were set to do battle in Sunday’s Final. Cole Rodgers left the grid in P1 after starting second but quickly fell down the order by the second lap of the main event. Tony Neilson took over the lead on the second lap, a lead he held until lap six when he got shuffled down to fifth, where we stayed for the rest of the race. Jeff Dolian then took over, controlling the race up until the final lap. Starting sixth, Riley Scott fought hard throughout the race, and found himself in fourth on the final lap. After a stellar final tour of the Quincy circuit, Scott managed to pass all three karts in front of him and claim victory in a blood-pumping finish. Top qualifier Todd Bolton maintained the second position for much of the race, finishing there after some shuffling in the final laps. Jeff Dolian ended up crossing the line in third to close out another successful weekend. Top qualifier Rodgers ended up in fourth at the checkered flag ahead of Neilson.

Full Results can be found at MyLaps