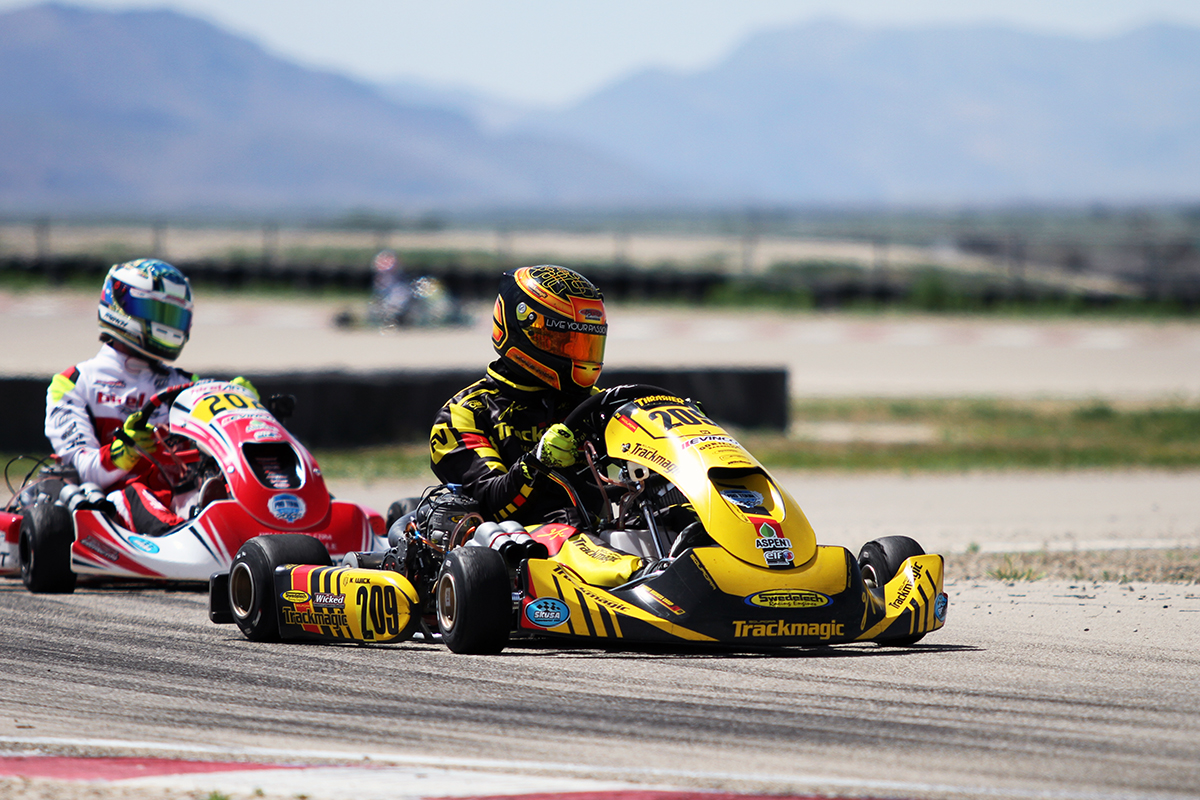 Kyle Wick overcame issues in qualifying to fight back to the victory in Pro Shifter (Photo: EKN)

The first half of the 2022 Superkarts! USA Pro Tour is in the books following Round Three being contested on the first day of competition at the SKUSA SpringNationals presented by ASPEN Fuels USA. The third time the event has been held at the Utah Motorsports Campus – fourth total visit to the Erda, Utah facility – is in a different month. The weather throughout the weekend, including today, felt more like July, as temps rose into the mid-90s by the final checkered flag. The heat was felt on and off the track for the nine categories deciding today’s winners.

The headline Pro Shifter category sponsored by PSL Karting featured 25 drivers on the day. Back in NOLA at the WinterNationals, they were all chasing 2019 FIA World Karting KZ Champion Marijn Kremers (PSL / Birel ART). The Dutchman was able to edge out 2017 champion Jake French (PSL / Birel ART) by 21 thousandths with a 55.369-lap in qualifying. In the Prefinal, French was able to take the lead after four-time SuperNationals winner Billy Musgrave (Factory Kart) grabbed the holeshot. French went on to take the provisional win, holding off Kremers at the line. A pushback bumper penalty dropped French to fourth and put Kremers P1 with defending champion AJ Myers (Magik Kart USA) alongside on the front row. Myers took the holeshot to begin the 20-lap Final with Kremers slotting into second. After the first circuit, Kremers looked inside of Myers in turn one. The two made contact at the apex of turn two, sending both off in the dirt. Myers spun around backwards while Kremers rejoined further down the order. This gave French the lead with Hunter Pickett (PSL / Birel ART) in second. Eventually, 2019 champion Kyle Wick (GFC / Trackmagic) was on the hunt after suffering an engine issue in qualifying and driving up to eighth in the Prefinal. He would put himself into the second spot by lap 12 and slowly reeled in French. Coming to the white flag, Wick was able to move around French and from there, drive off to the checkered flag for the victory – the first in Pro Tour history for the Trackmagic brand. It is Wick’s first Pro Tour victory since SpringNationals 2018 in Phoenix. French settled for second, his best finish of the 2022 season thus far with Pickett joining them on the podium in third. Jacob Gulick (GFC) drove to fourth with Hannah Greenemeier (RPG / LN Racing Kart) placing fifth in her Pro Shifter debut. Kremers drove back to eighth while Myers ended up 18th. 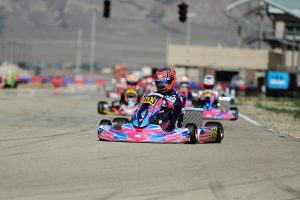 The Speedlab Racing Engines X30 Senior class went down to the wire. It began with Paul Bocuse (RPG / Kosmic) posting the quickest lap out of the 29 drivers in the field with a 57.658-lap, edging out four-time Pro Tour champion Ryan Norberg (RPG / Kosmic) by 65 thousandths. Bocuse led the opening three laps before Norberg took control. Championship leader Nate Cicero (RPG / Kosmic) took the lead toward the end, however, Norberg came through with the win. The 20-lap Final was a battle to the end, finishing under yellow flag at the start/finish line. Norberg was able to jump out to a solid lead, over one-second by the time Cole Kleck (Arcane / CRG) put himself into the second spot from P9. Kleck, the Fast Friday driver, was able to run down Norberg and take the lead on lap 14. He led two laps before Norberg returned to the lead with a push from Cicero and allowed former FIA Karting World Champion Pedro Hiltbrand (PSL / Birel ART) into the mix. They shuffled for position behind Norberg, allowing the former champ to earn his second straight victory on the season. Hiltbrand was able to secure the second spot through the final corners while Cicero and Kleck raced for the checkered flag. As they made their way to the line, the two made side-by-side contact. The results sent Kleck into the tire wall, and he was ejected from the kart. Thankfully, he was able to jump over the wall, and was attended to by medical personnel, and later cleared of any major injuries. The rest of the field had to scatter across the line due to tires from the wall on the track along with Kleck’s kart. The final results have Marijn Kremers (PSL / Birel ART) up 10 spots to third with Bocuse fourth and Jeremy Fletcher (RPM / Tony Kart) fifth. Cicero was removed from the event due to for a ‘dangerous incident responsibility’ surrounding the contact with Kleck. 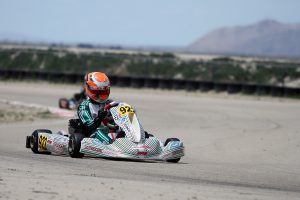 Last year’s KA100 Senior winner Caleb Shrader (RPG / Kosmic) put his name in the hunt early with fast time in qualifying, setting a 1:00.397-lap to best the 36-driver field sponsored by Ryan Perry Motorsport. Sitting second was Round Two winner Jeremy Fletcher (RPM / Tony Kart). Fletcher came away with the win in the Prefinal ahead of Round One victor Cedrik Lupien (RPG / Kosmic) with Shrader in third. Fletcher was able to get away early in the Final and maintain a gap throughout the 20-lap race, earning his second straight victory. Cole Kleck (Arcane / CRG), who moved up to fourth in the Prefinal, advanced up to second, finishing three seconds behind Fletcher. Shrader was able to beat out Lupien for the third step of the podium, however, the Canadian was removed from the results for ‘seat struts DQ’. That promoted championship leader Alex Stanfield (GWR / Tony Kart) to fourth, up seven spots, with Utah driver Ethan Raap (MSquared / LN Racing Kart) up five to fifth. 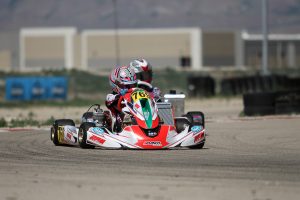 Several drivers were in the hunt throughout the day in the Rolison Performance Group X30 Junior category. Brandon Carr (Benik / Kosmic) was able to secure the fast time in qualifying ahead of Max Taylor – making his RPG / Kosmic debut. The Prefinal was won by Round One winner Caleb Gafrarar (RPG / Kosmic), but a pushback bumper penalty dropped him to sixth in the order, promoted Taylor to the win. Taylor led the first five laps before shuffling put Canadian Jensen Burnett into the lead, making his RPM / Tony Kart debut. Burnett was able to put down consistent laps to maintain a lead over Taylor, earning his first SKUSA Pro Tour victory. Gafrarar advanced four spots to end up third on the podium ahead of Ayden Ingratta (SCR / CRG). Cameron Brinkman (MDR / LN Racing Kart) scored his best finish of 2022, ending up fifth up seven spots over the 20 laps. 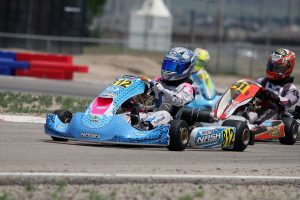 The day looked to belong to Caleb Gafrarar (RPG / Kosmic) in the Nash Motorsportz KA100 Junior division. Gafrarar was able to secure fast time in qualifying from the slow group after contact in the final practice session on Friday kept him down the quick time order. Gafrarar went on to win the Prefinal after provisional winner Cooper Shipman (IRM / Tony Kart) suffered a pushback bumper penalty. Gafrarar led the first five laps until he was shuffled back to fifth as Charlie Smith (Nash / EOS), up from third, took the lead. He and Shipman ran 1-2 the remainder of the distance, with Smith taking his first SKUSA Pro Tour victory. Jesus Vasquez Jr. (Nash / EOS) advanced six spots up to third with Gafrarar in the provisional fourth position. A five-second penalty for contact dropped him to fifth, moving Steven Miller (CDR / Kosmic) to fourth.

Three drivers competed in the Harden Motorsports Group Master Shifter class with Robert Fiege (HMG / Maverick) taking the win. Michael Guasch (RWR / CRG) grabbed the holeshot in the Final and led all 20 laps, however, was removed from the results for a ‘non-conforming bumper’. That promoted Fiege to the top of the podium for maximum points on the day ahead of Ken Schilling (HMG / GP). Mario Barrios (RPG / Kosmic) swept the day as well in the X30 Master class sponsored by Evinco. Barrios bested Mike Rolison in all three sessions for a sweep on the day. 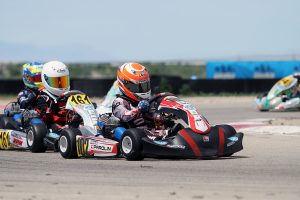 It was a great battle all day long in the Parolin USA Mini Swift division with Jack Iliffe (IRM / Parolin) beginning on top after qualifying. Iliffe was able to cross the line first in the Prefinal, but a jump start penalty put him down to sixth and moved Lucas Palacio (TKG / Kart Republic) to the pole position in the Final after qualifying 13th. Palacio led the field in the Final for seven laps before he was shuffled down the order. Alessandro Truchot (Parolin USA) led for a lap before Iliffe – who fell back to 12th on the opening circuit – was back at the front. Utah driver Michael McGaughy (RPM / Parolin) followed him through and led for two laps before Iliffe took back the position. On the final circuit, the lead group of about nine drivers jostled for position behind Iliffe in the final few corners. Iliffe would go on to take the victory, his second on the season. Palacio was able to fight back up into the second spot ahead of Gage Bailey (Benik). Asher Ochstein (Supertune / Tony Kart) and Tyler Roberts (Parolin USA) completed the top-five. 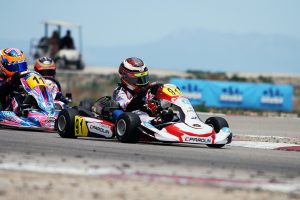 The Team Benik Micro Swift class welcomed a new winner on the SKUSA Pro Tour. Julian Sanchez (GFC) put his name into the mix by setting fast time in qualifying and winning the Prefinal. He would not lead a lap in the Final and ended up finishing eighth despite earning fast lap of the race. Up front, Jackson Gibson (RPG / Kosmic) set the early pace until Rocco Simone (Parolin USA) took over. Leading 13 laps in total, Simone secured the victory, holding off Royce Vega (Benik) by just three thousandths of a second. Two-time winner Troy Ferguson (Benik) was third with Gibson fourth and Paxton Dyson (Trackside / EOS) in fifth.

Sunday will provide Round Four action of the Superkarts! USA Pro Tour for the final day of the 2022 SKUSA SpringNationals from the Utah Motorsports Campus.