The second stop of the 2022 Superkarts! USA Pro Tour takes karters to the Utah Motorsports Campus for the 12th edition of the SKUSA SpringNationals – presented by ASPEN Fuels USA. Round Three and Four of the SKUSA Pro Tour will be contested at the Erda, Utah facility, as the 13th season of the championship program resumes after the opening two rounds were contested at the NOLA Motorsports Park back in April. 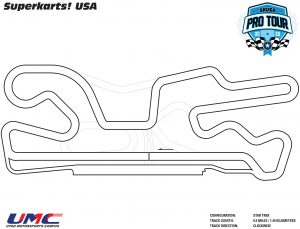 With 204 pre-entries over the nine categories, this makes it the second highest total since 2018, just 17 short of the total from last year. This weekend is the fourth visit for the Superkarts! USA Pro Tour to the Utah Motorsports Campus, dating back to the 2012 SummerNationals at the then named Miller Motorsports Park. The SpringNationals in 2019 and 2021 were held at UMC.

The Miller Motorsports Park was opened in 2006 and carried that name until changing in October 2015 to Utah Motorsports Campus. Over the 16 years, the 0.9-mile karting circuit has hosted a number of national and regional events, including three previous SKUSA Pro Tour events. The ‘Star Trek’ layout features 18 turns, with this year’s SpringNationals following the same direction as the previous two, going in the clockwise direction.

The field is deep in the X30 Senior division with 28 drivers set to continue the battle that began in NOLA for the 2022 SKUSA Pro Tour championship. Nate Cicero (RPG / Kosmic) is the current point leader thanks to a consistent weekend in the ‘Big Easy’ with a third and runner-up result. Round Two winner and four-time former champion Ryan Norberg (RPG / Kosmic) is 94 points out of the point lead with Pauly Massimino (RPM / Tony Kart) moving up to third in the chase with the absence of Canadian Thomas Nepveu (TKG / Kart Republic). Then in fourth is 2019 FIA Karting KZ World Champion Marijn Kremers (PSL / Birel ART) pulling the double duty with Pro Shifter. Familiar drivers will be in the mix all weekend, including Round One winner Jeremy Fletcher – making his debut with Ryan Perry Motorsport this weekend. Zachary Claman DeMelo is also moving over to the Parolin USA tent this weekend, sitting sixth in the standings behind Fletcher. Dante Yu (Nash / EOS), Hayden Jones (RPG / Kosmic) and Kyriakos Sioukas (AKR / OTK) are returning contenders. Young guns to watch include Cameron Weinberg (SCR / CRG), Frankie Mossman (Benik / Kosmic) and Jason Leung (RPG / Kosmic). 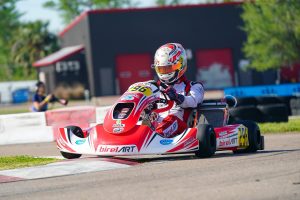 The ‘Green for Green’ by ASPEN Fuels USA has been added to the Pro Shifter category for the weekend. An extra $6,000 for a weekend purse is available to the top-three drivers who score the most points over the two days of competition. Leading the way going into the weekend is Marijn Kremers (PSL / Birel ART) who swept the two rounds at NOLA. He established a 120-point lead over defending champion AJ Myers (Magik Kart USA). GFC drivers Jacob Gulick and Kyle Wick are third and fourth with four-time SKUSA SuperNationals winner Billy Musgrave (Factory Kart) in fifth. The weekend marks a new home for Hunter Pickett and the class debut for Hannah Greenemeier. Pickett will make his PSL / Birel ART debut on the weekend while the 2021 X30 Senior Pro Tour champion is making her Pro Shifter debut. Seven of the top-10 from the EKN Shifterkart Driver Rankings will be in the field in Utah.

Tied for the highest entry total on the weekend with 36 drivers is KA100 Senior. Consistency is key thus far in the title chase with two-time runner-up finisher Alex Stanfield (GWR / Tony Kart) leading the standings by just 10 points over Round One winner Cedrik Lupien (RPG / Kosmic). Cole Kleck (Arcane / CRG) is third in the points ahead of Peyton Phillips (Supertune / Tony Kart) and last year’s SpringNationals race winner Caleb Shrader (RPG / Kosmic). Round Two winner Jeremy Fletcher (RPM / Tony Kart) is sitting seventh in the standings behind Gia Cicero (RPG / Kosmic), who grabbed her first SKUSA Pro Tour podium at the WinterNationals. The local contingent could defend the home turf with 2019 SpringNationals winner Walker Hess (MSquared / Tony Kart) and Andy Nish (RPG / Kosmic). Aden Rudolph (PSL / Birel ART) was a contender throughout the Winter Series, making a return back to the class after racing X30 in NOLA. Travis Varney (FDM / CompKart) and Macy Williams (CBM / EOS) could be sleepers on the weekend to fight for podium results. 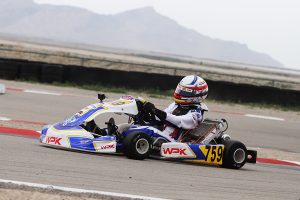 The other category that has 36 drivers in pre-entry is the KA100 Junior division. The championship chase has been put into a blender with two of the top-six not on the entry list, including point leader and Round One winner Helio Meza (IRM / Tony Kart). Appendix removal surgery will keep the Texan home for the weekend, along with P4 Christian Cameron (SCR / Redspeed) not on the entry list. Caleb Gafrarar (RPG / Kosmic) will inherit the championship lead going into the weekend with Stephen Eisert (Speedsense / Exprit) the top challenger. Parker DeLong (RPM / Tony Kart) and Oscar Iliffe (IRM / Tony Kart) are not on the entry list but said to be walk-up entries. The shakeup could help Round Two winner Jesus Vasquez Jr. (Nash / EOS) get back into the chase, as he sits eighth behind Ernesto Rivera (RPG / Kosmic). Drivers to watch include Spencer Conrad (Nitro / Tony Kart), Valentino Garbarino (RPM / Tony Kart), Keagan Kaminski (FW / GFC), Preston Lambert (GFC / Trackmagic) and Cooper Shipman (IRM / Tony Kart).

The early fight in the X30 Junior championship is tight, with the top-four separated by only 57 points. All four have been competing against one another with Max Garcia (MPG / WPK) leading race winners Caleb Gafrarar (RPG / Kosmic) and Ayden Ingratta (SCR / CRG) along with Brandon Carr (Benik / Kosmic). Rivera, Shipman, Vasquez and others will be performing double duty on the weekend. 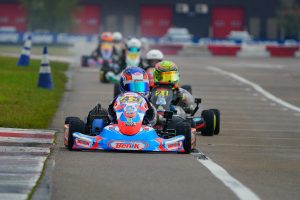 Five drivers fill up the entry list for the Master Shifter division, led by double race winner Vincent Cossard (PSL / Birel ART). His perfect score at NOLA has him leading the standings by 100 points over Victor Jimenez (RPG / Tony Kart). West coast driver Michael Guasch is making his 2022 debut at the SKUSA Pro Tour, along with the move to the Ron White Racing / CRG camp. Robert Fiege (HMG / Maverick) and Ken Schilling (HMG / GP) complete the field. No X30 Master drivers are on the entry list as originally the class was removed from the event, however, there was word from SKUSA that there may be a few walk-up entries for the class.

The Mini Swift class is another category we are seeing a shuffling in the championship chase before the official events begin. Point leader Oliver Wheldon (JC / LN Racing Kart) is not competing in Utah along with P3 driver Keelan Harvick (Parolin) and P5 Vivek Kanthan (Parolin USA). This moves Round One winner Jack Iliffe (IRM / Tony Kart) to the top of the points – not on the entry list but confirmed as a walk-up entrant. Carson Weinberg (SCR / CRG) moves to the second spot with Round Two victor Tyler Roberts (Parolin USA) back in the hunt, now up to third but sitting 102 points back. This opens the door for others to improve their chances with a solid weekend in Utah, including Gage Bailey (IRM / Benik), Asher Ochstein (Supertune / Tony Kart), Max Cristea (PSL / Birel ART) and SKUSA Winter Series Micro Swift champion Alessandro Truchot (Parolin USA).

A near perfect score from the WinterNationals puts Troy Ferguson (Benik) as the driver to beat this weekend in Utah. Ferguson enters with a 65 point advantage over Rocco Simone (Parolin USA). Drew Walz (Birel ART), Royce Vega (Benik), and Nicolas Orbezo (Tony Kart) are the remaining top challengers with the long, flowing race track this weekend likely to include several other drivers of the 20 entered into the mix to fight for podium positions.

Be sure to follow EKN all weekend long for the daily coverage, including race reports on the site along with updates, top-10 results, photos, videos and more on the EKN Facebook, Twitter and Instagram accounts on social media.